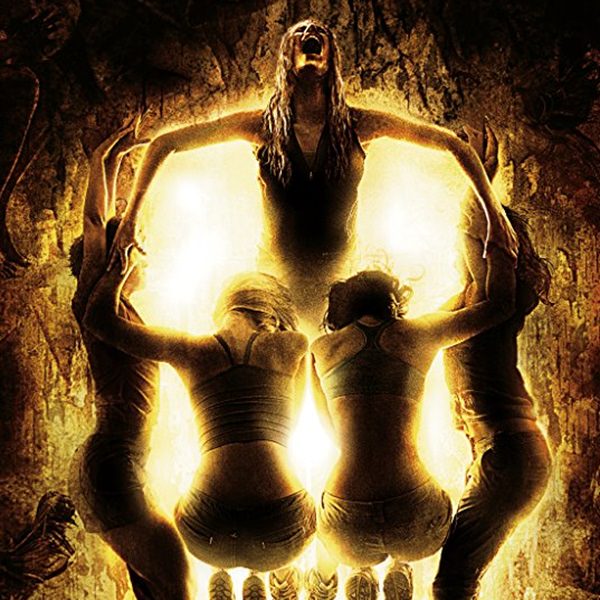 ‘On a caving expedition a group of friends become trapped and pursued by strange cave-dwelling creatures.’

Any director can do a monster movie. It’s an easy, trashy, sub-genre of the horror film, and the fact that throughout cinema’s history we’ve been littered with them confirms it. Simplistic and straightforward, there’s something crowd-pleasing about this type of film that draws audiences in, no matter how bad they can be. But as films like Alien (1979), Jaws (1975) and The Thing (1982) proved, they can be great, and can even be considered classics in their own right. By putting time and effort into your characters, developing a good story, having a great creature, and knowing how to execute it all with good cinematography, can actually result in an excellent movie. The Descent, which came out way back in 2005, just so happens to be one of those films.

This little gem was directed and written by Neil Marshall, who would later go on to direct some of today’s best TV shows, including two episodes of Game of Thrones. Back then though, The Descent was only his second feature after the very low budget but underrated Dog Soldiers (2002). However, it showed he knew how to take limited resources and make the most out of them, which is what he certainly does here.

Following an all-female cast of adventurers, the story focuses on a caving expedition that goes horribly wrong. Wanting to do something exciting, Juno (Natalie Mendoza) leads her unsuspecting friends down a uncharted cave system. With her, is also Sarah (Shauna Macdonald), who just one year prior had gone through a personal tragedy. Things start of smoothly, but when they get trapped and realise there’s no way out, panic starts sinking in, and to make matters worse, strange creatures seem to be hunting them.

What makes this creature feature stand out amongst the rest, is its priority on developing believable characters, and relatedly, its pacing. Where the majority of these films would quickly skip over the set up and get straight to the monster mayhem, thinking that’s all viewers care about, Marshall doesn’t. He takes his time in laying out the events that will eventually lead these women down that cave. Showing restraint and patience, he allows the audience to really get a feel for these people and get attached to them, which ultimately will make those horror aspects that more impactful. Having an all-female cast also adds an interesting and fresh dynamic.

Marshall also succeeds in choosing and creating a perfect environment in which to place his characters. Cut-off and isolated, the caves present a claustrophobic and terrifying atmosphere, and he uses that darkness to slowly build tension, where you can only see what the characters see, making us think anything could be lurking in the shadows. There’s no doubt you’ll feel suffocated and freaked out long before any monster turns up. Spending so much time raising the suspense, Marshall also makes sure the pay-off is worth it, so when these cave-dwelling monsters appear, the horror hits a whole other level, and the chaos never lets up until the end.

These creatures, who the crew called “Crawlers”, are a fearsome creation, and Marshall executes and utilises them well. They’re bloodthirsty and savage, and thanks to the environment, will come out of nowhere causing you to jump in your seats every time. What’s more, he gives them a plausible backstory of ancient humans who never left the caves, so have just evolved over the centuries to thrive underground in the pitch black. Having this almost credible situation only increases the terror, and the actors who play them, add a real animal physicality to their movements, while also remaining uncomfortably human.

All the actresses do fantastic work as the adrenaline junkies who get more than they bargained for. Bringing believable and grounded performances, and combined with great chemistry and authentic friendships, these are characters we can all root for. As mentioned, having a woman-only cast adds something different to the relationships, where there’s more complexity and depth between them than if we had a mixed group.

Macdonald especially has a lot of emotional heavy lifting to do and she nails it as someone who’s getting over a traumatic experience and just looking for some kind of escape. Really though, all the cast do such solid work that they become more than bodies to me mauled. Furthermore, Marshall smartly kept them separate from the “Crawlers” until that first scene where they make their appearance, evoking real fear amongst some of the cast.

‘The Descent is a well-crafted creature feature, made great by its detail to building tension and characterisation. With a claustrophobic atmosphere, terrifying monsters, and a bold and brutal ending, it proves these type of films don’t have to be trashy and forgettable B movies, but can be so much more when done right and with care.’