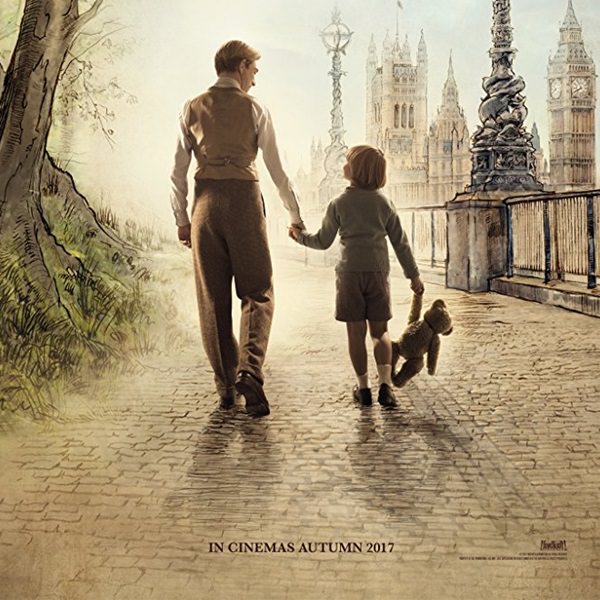 ‘How the relationship between A. A. Milne and his son became the inspiration for Winnie the Pooh.’

Goodbye Christopher Robin tells the real life story of how author A. A. Milne created his famous books about teddy bear Winnie-the-Pooh and his various friends in the Hundred Acre Wood. Directed by Simon Curtis, the plot starts just after the end of World War One, and focuses on A. A. Milne’s (Domhnall Gleeson) struggle to adjust back to normal life as a playwright. Suffering from PTSD, he moves his wife Daphne (Margot Robbie) and son Christopher Robin to the countryside in Ashdown Forest, including nanny Olive (Kelly Macdonald).

Once there, he begins to bond with his son and is inspired by the adventures they have in the woods to write a book about him and his teddy bear, which will become the world famous Winnie-the Pooh stories. But the Milne’s soon experience the ugly side of fame, as their private lives soon become more and more public.

Right from the beginning, this is a great film about the origin of some of the most beloved children books on the planet, and a peak into the lives of the family who created it. Even if history’s been tweaked to make for a more cinematic and dramatic story, there’s no denying that writers Frank Cottrell-Boyce and Simon Vaughan have written a script with a lot of depth to it. This is so much more than a biopic about the man who wrote the Pooh books, but a look into the complex relationship between a father and son.

Usually, a film like this would be a sweet, charming, and uplifting experience, which it is, but Curtis isn’t afraid to bring a more thoughtful and poignant tone as well. As mentioned, we explore what it was like to come back from the First World War and live with PTSD, with men struggling to process what they had just experienced. He doesn’t sugar-coat it either, and we see what it was like in a time where you really had that culture of the British stiff upper lip, and the soldiers having to keep all that stuff bottled up. We especially see the way this effects Milne’s relationship with his family, and how it puts a certain distance between him and them.

Curtis smartly and skilfully takes his time with a deliberate pace in the first half, where Milne gets over his post-traumatic stress gradually and realistically. Where we slowly see him thaw as he spends time with his son in the woods. Those scenes in fact, are some of the most moving parts of the film, seeing a dad play with his son, and finding healing in that time.

Despite being set in the early Twentieth Century, Curtis actually brings a very relevant and contemporary edge to the story, as the film delves into the issues of celebrity culture and the darker side to being famous. As Christopher Robin becomes increasingly recognisable, the more he loses out on a normal childhood. With it, not only comes conflict between Milne and his son, but also between husband and wife. Daphne is a socialite and enjoys all the attention, which does have a negative effect on their marriage, and we see all this expertly play out with realism and authenticity.

All these topics are tackled via some fantastic acting from the main cast, who all excellently bring this story to life. Domhnall is quietly brilliant as the extremely reserved Milne. Able to do a lot of emoting with very little, you absolutely feel his pain and anguish despite the restrained performance. Him and Will Tilston, who plays the young Christopher Robin, display a wonderful chemistry, and they really capture a beautiful picture of a father and son relationship, and all of the complexities and nuances that come with it.

Robbie’s Daphne is a more conflicted character. She’s a loving mother, but she also enjoys the high life, and therefore pushes her son into the spotlight. It would almost be an antagonistic role if it weren’t for Robbie’s deft hand in portraying both sides believably. Macdonald’s nanny is even full of heartfelt emotion, and she presents a convincing maternal and protective love for the boy she practically raised, and who really advocates for his childhood not to be destroyed by his sudden celebrity status.

This is visually a stunning film, and Curtis makes the most of the lush surroundings of Ashdown Forest to create a really picturesque environment. The way the sun light breaks through the trees and windows is gracefully shot, forming an appealing and almost otherworldly paradise for Milne to find escape in. Combined with images which are immaculately constructed from the books with great care and detail, a sublime world has been fashioned, that audiences will find hard not to fall in love with.

‘Goodbye Christopher Robin is not only a delightful and charming film, but it has a deeper and darker story that delves into some weightier themes. Indeed, with engaging performances and radiant visuals, this movie will easily entice audiences. It’s incredibly moving, and even those with the most cynical and hardened of hearts, will melt at this true tale of a man finding healing in his son.’