The Cloverfield Paradox review – an enjoyable but forgettable sci-fi 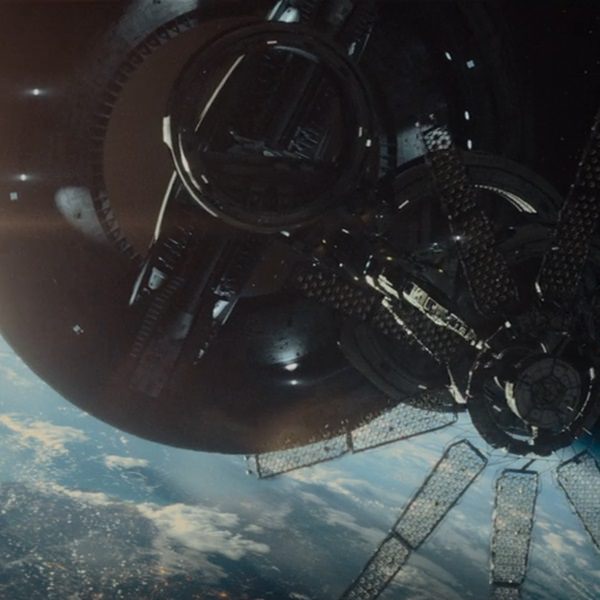 ‘Orbiting above Earth on the brink of war, scientists test a device to solve an energy crisis and end up confronting a dark alternate reality.’

It was bold two years ago when J.J. Abrams released his second instalment to the Cloverfield franchise, 10 Cloverfield Lane (2016), with nothing more than a trailer two months before it hit cinemas. Now, get ready for the latest movie in this series to take that extreme even further, as Netflix requires the distribution rights and drops it on their service with literally no warning on the same day as there surprise super bowl trailer, literally straight after the game. Although highly unorthodox, it may yet work to Netflix’s advantage as a direct-to-streaming release, but ultimately, only time will tell if this strategy proves fruitful.

Titled The Cloverfield Paradox, and directed by the relatively new Julius Onah, the story takes place in the near future, with an Earth on the brink of war due to depleted energy resources. The planet’s only hope is a team of scientists, including communications officer Ava Hamilton (Gugu Mbatha-Raw), physicist Schmidt (Daniel Brühl) and Commander Kiel (David Oyelowo), who are working on the Shepherd particle accelerator aboard the Cloverfield space station, which if successful, could provide unlimited energy for everyone. But, as is standard procedure with these kind of movies, things go horribly wrong, and the crew find themselves in an alternate reality.

Like the previous film, The Cloverfield Paradox is more or less a stand-alone story, but with some connective tissue and shared DNA. As such, you can watch this instalment with little need to see the others, or have any kind of background knowledge of what came before. Whereas the first one was a found-footage monster movie, and the second a claustrophobic, physiological thriller, this one is full on science fiction, with some horror spliced in for good measure. In that case, it has more in common with last year’s Life (2017) and other space-based sci-fi’s, and judged among that genre, this one is good but nothing to shout about.

It’s definitely the weakest of the Cloverfield films, and although it has some provocative ideas and raises some interesting questions, like good science fiction should, it’s let down by a very formulaic structure. Basically, the story is something we’ve seen play out numerous times before, and the idea of parallel dimensions is already becoming over-familiar.

For example, TV shows and films like Stranger Things (2016-present), Fringe (2008-2013) and Coherence (2013) are just a few of the many that have already explored this concept. Not only that, the story trope of a ragtag team on a desperate mission to save earth is equally very stale and unoriginal, having been rehashed in countless other movies.

The pace feels rushed and apart from Mbatha-Raw’s Ava, hardly any time is invested in the other characters to make them feel like anything more than thinly drawn out archetypes. It seems Onah was far more interested in getting to the chaos of the story, and skipping the character development, which in the end, is what will keep audiences engaged. There’s even conflict shallowly written in between two people that feels forced and unnatural, just for the sake of creating dramatic tension.

Despite that, not all of the great international cast are wasted, and even with the lack of depth, most of them do a solid job with the little material they have, especially Oyelowo and Brühl, who are essentially just written as the commendable captain and brilliant scientist. Even Chris O’ Dowd is good as the comic relief, and brings just the right amount of levity to the overall tone. However, as the more fleshed out character, Mbatha-Raw has easily the most compelling role, and she brings a really heartfelt and sympathetic performance, where she’ll likely be the only person you’ll be cheering for.

On the positive side, this is a visually appealing movie, and Onah has brought some brilliant production value out of the small budget (for a sci-fi anyway). The set is very detailed, and the design of the Cloverfield station feels distinct and fresh enough to help it stand out. When it comes to those few horror moments, there’s some freaky visuals and disturbing imagery that will certainly help maintain suspense and keep things exciting.

‘The Cloverfield Paradox is a noble effort at continuing the franchise, which now looks like it’s shaping up to be an interconnected anthology series of films. Unfortunately, apart from some strong performances and good visual effects, there is little that’s memorable about this over-done narrative structure to help it stick out amongst this bloated sub-genre. If anything, it will be remembered more for Netflix’s stunt release, which if proves successful, may just start a whole new trend across the streaming industry.’