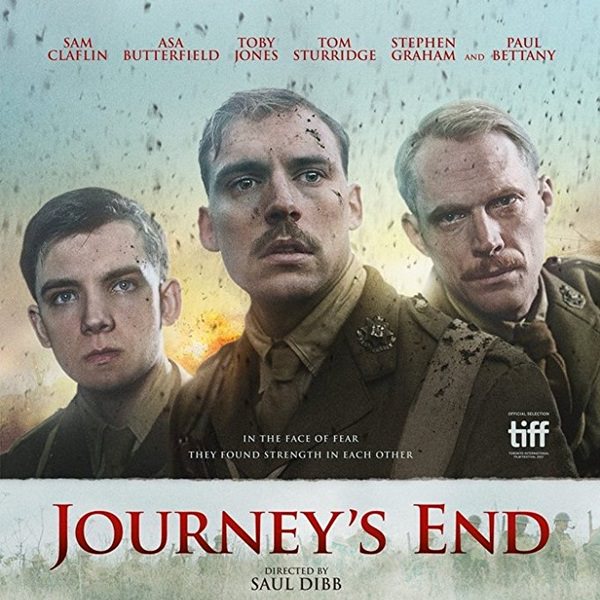 ‘A company of British infantry take their turn in the trenches as they prepare for a German offensive.’

In the last year or so, it seems we can’t get enough of World War Two movies. We’ve already had Hacksaw Ridge (2017), Their Finest (2017), Dunkirk (2017), and most recently, Darkest Hour (2018) to name just a few. It’s good then, to have a film come around like Journey’s End, which is directed by Saul Dibb, and remind us there was another global war before that. A war just as terrible and horrific as the more cinematically friendly second one, that involved the harsh realities of trench warfare.

Originally a 1928 play by R. C. Sherriff, in which this version is actually the fifth adaptation, the story follows a group of soldiers in France during the end of the war, and depicts their brutal and miserable existence in the trenches. With a German offensive imminent, the men of Company-C are on the edge, particularly Captain Stanhope (Sam Claflin), who drowns his sorrows in whisky most nights. Along with his second in command, Lieutenant Osborne (Paul Bettany), a young acquaintance of Stanhope’s joins the company, Second Lieutenant Raleigh (Asa Butterfield). Bought in by the propaganda and full of excitement, he has no idea of the horrors that await him.

Unsurprisingly for a play adaptation, Journey’s End is light on the action, and instead focuses on the dialogue and the relationships between the men. More of a character study, this is one of those war films that keeps it personal and realistic. There’s no gun-ho mentality among the soldiers, where they’re ready to fight for king and country, but all they want to do is just survive and go home. Really, it’s one of those stories about the pointlessness of war, where infantry were seen more as pawns to be used, rather than fellow humans. You really get that sense here, and there’s a particular stark contrast between the troops in the trench, and the colonel (Robert Glenister) who commands in relative safety, and seems very detached in some of the decisions he makes.

Simon Reade, who wrote the script, does a great job in presenting believable characters and writing dialogue, but the other half of this movie is the visual storytelling, which Dibb proves brilliant in doing. Shot very unglamorously, he skilfully creates a hellish environment, which only aids in selling the men’s despair. He uses everything at his disposal to build a gloomy and depressing atmosphere. Whether it’s the sound of the squelching mud as the soldiers walk around, the always dimmed lighting, or the use of close up shots, it’s all brought together to present the most claustrophobic and terrifying setting that no sane man would want to be in. Even the score, with its use of harsh violin strings, almost gives the impression of watching a horror movie.

Dibb also knows how to pace his film, and keeps everything ticking along at a steady speed, perfectly holding that tension just beyond breaking point. All this helps create an oppressive mood that never leaves, and when those one or two action sequences do come, it makes them that more intense and nail-biting.

To go with these visuals, are some incredible performances by the lead cast, which only adds an extra layer of authenticity to this historical story. Claflin does some fantastic acting as the broken captain. He’s a man who’s constantly on the verge of a nervous breakdown, using whisky to dull his senses and mental anguish. As such, he’s someone who’s grown hard from his experiences, yet, Claflin is apt at showing cracks every now and then to a softer side. Subtle and nuanced, it’s a line he straddles impeccably, allowing the audience to still feel sympathy towards him.

Butterfield is superb as the fresh faced Raleigh, who has to go from excited to devastated in the space of the run time. It’s a believable transformation, and it’s through his eyes we experience this war. He’s a picture of all those going off to fight, naively thinking of adventure and glory, while not realising what war was really like. Clearly he sells it, in the way that innocence slowly erodes away, and the daunting realisation that he might actually die becomes his new reality.

The supporting cast all do solid work as well. Bettany especially, as the kindly Osborne, really plays up that British stiff upper lip, which was a common personality trait back then. But, he is also able to let that warmth and humanity shine through when needed, and he has a tender and brotherly chemistry with both Claflin and Butterfield. Indeed, it’s because of these fleshed out and developed characters we’re able to really care and feel for these people.

‘Although not an entertaining film in the traditional sense, Journey’s End is still a well-made and important story about a significant moment in history. With excellent cinematography and compelling performances, this is a movie that deserves and needs your time.’