Pirates of the Caribbean: Salazar’s Revenge review – nothing special 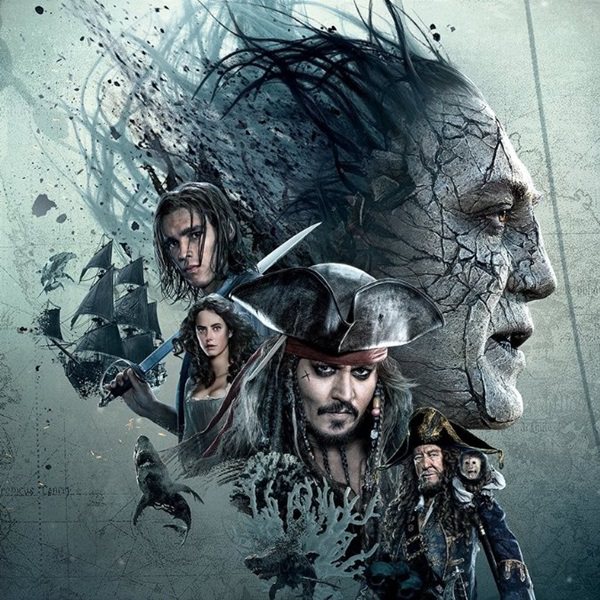 ‘Captain Jack Sparrow searches for the Trident of Poseidon in the hopes of stopping his old nemesis Captain Salazar.’

Directed by Joachim Rønning and Espen Sandberg, Pirates of the Caribbean: Salazar’s Revenge is now the fifth film in this Johnny Depp starring vehicle that refuses to die. After six years since the poorly received Stranger Tides, I don’t think anyone was particularly begging for another instalment, favouring to leave it dead and buried. Unsurprisingly though, it’s about the bottom line, and with the last one making over a billion dollars, it was inevitable that Disney would dig up this best forgotten film series just to make a quick buck.

Johnny Depp’s captain Jack Sparrow, who pretty much wore out his welcome by the third film, is once again at the centre of this plot involving zombie pirates and magical artefacts. When cursed Spanish navy officer Armando Salazar (Javier Bardem) is released from the Devil’s Triangle, he and his undead crew seek the powerful Trident of Poseidon with which they plan to wipe out all piracy, and seek revenge on Sparrow, who cursed them in the first place. With the help from new allies Henry and Carina (Brenton Thwaites and Kaya Scodelario), and old rival Hector Barossa (Geoffrey Rush), Jack must race to find the Trident before Salazar and put an end to his diabolical plan.

That’s the plot narrowed down, but really, there’s a lot going on and it can feel very bloated at times. There’s a number of storylines to split the runtime between, and it comes off convoluted and unnecessary. They could have easily streamlined the story and brought a bit more focus and simplicity to what should be a standard and fun adventure film.

There’s nothing new here to offer, with the structure being the same tried and tested formula from the previous movies. Jack Sparrow and a random young couple get pulled into his orbit, which usually ends up with them having to find a magical item of some kind to save the world from a supernatural threat.

As a result we get a strong sense of déjà vu, and an experience that feels rather boring. All these threats seem to have a personal connection to Jack, conveniently giving the story a reason to include him. Obviously, he’s the main draw, but narratively speaking, suspension of disbelief has to be stretched to the point where within the vast oceans of the Caribbean, everyone who’s important to the story is unrealistically on the same island. What’s more, character dynamics and relationships are brought in that serve no real purpose other than to force character development that isn’t really needed.

Speaking of which, in the very first film, Jack Sparrow was an eccentric pirate with a heart. It felt fresh and more restrained back then, but with each passing film those eccentricities have pretty much taken over the whole character, making him more annoying than anything else. Depp clearly knows this character inside out, but his whole Keith Richards shtick is getting old by this point, as he stumbles through set piece after set piece, drunk on rum most of the time, and mumbling out his lines.

Clearly phoning it in, he’s no longer funny either, with a lot of the jokes falling flat. The problem is there’s just too much reliance on him, when in fact, he no longer can carry the film like he could in that first trilogy. Even the return of Orlando Bloom, which was made much of, feels tact on, in what’s more like a glorified cameo, and a desperate attempt to draw in old fans. Thwaites’ new character Henry has an emotional interest in their quest, but even he comes off as dry and lifeless as he did in Gods of Egypt.

Luckily, it’s not all bad in terms of the acting, with Kaya Scodelario putting in a solid performance, as she continues to climb the Hollywood ladder after her stint in the The Maze Runner (2014) films. Despite a pointless and ridiculous third act reveal, she brings a lot to her character. Other than Depp, Rush’s Barbossa is the only other main character to appear in all five movies, and it’s also refreshing to see him do more than be that foil in Jack’s side, and get fleshed out some more.

Bardem makes a good villain, and gives a menacing performance of a man totally committed to revenge. The combination of makeup and CGI are skilfully blended to create his undead appearance. Relatedly, as with all these instalments, a lot of visual effects are used in the action sequences, which are good but offer nothing special to make them stand out among all the other CG heavy blockbusters. They’re exciting and fun for the most part, but it’s stuff we’ve all seen before. Bar maybe a scene involving zombie sharks in broad daylight, which is about the only scene that manages to muster any suspense, the rest are mostly set during night time where it’s hard to see what’s going on.

‘Those who genuinely like this franchise, should be satisfied with Pirates of the Caribbean: Salazar’s Revenge. Having all that you would expect, it’s a perfectly acceptable film. Sadly, as with most long running franchises, it brings nothing fresh to the table and pretty much feels like it exists as a cash grab, doing just enough to turn a profit. Ultimately, with its messy and unfunny plot, a sleepwalking Depp, and mediocre action, this is purely a film just for the fans.’