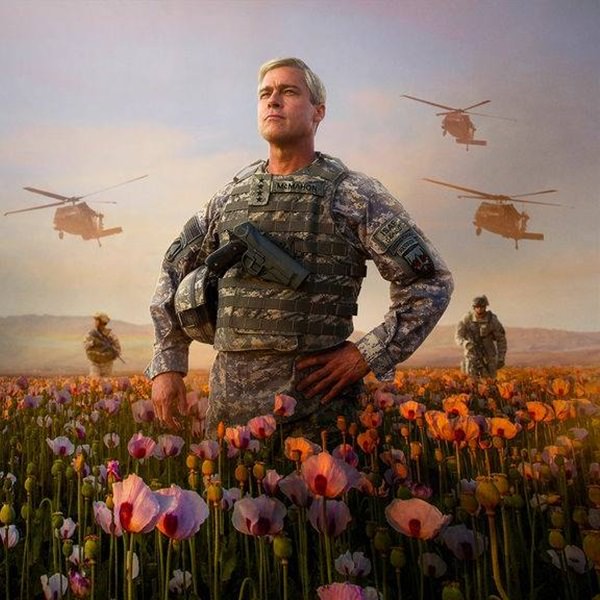 ‘General Glenn McMahon takes over command of NATO forces in Afghanistan but is brought down by a journalist.’

Edwin Starr once put forward, via his famous protest song, that war was good for absolutely nothing, and it would seem Hollywood wholeheartedly agrees with that sentiment. Films about the pointlessness of war are hardly rare, and particularly ones about the U.S. and the Middle East. With Green Zone (2010), The Hurt Locker (2009), and Three Kings (1999), to name just a few, it’s clear many American’s question their involvement in these far corners of the world, and whether their presence actually makes a positive difference, or just worsens it. Regrettably, War Machine, directed by David Michôd and loosely based on Michael Hastings novel The Operators, has nothing new to offer to help it stand out among the crowd, coming of as a rather dull take on the war in Afghanistan.

Centring around Brad Pitt’s General McMahon, the story follows his recruitment into Afghanistan to bring the war to an end, and clean up the mess left by his predecessor. Seeing the mission as an opportunity to prove how great he is, he goes against all advice and attempts to secure a large number of troops to take control of a region of land that everyone says is unwinnable. Alongside him is a handpicked team, including right-hand man Major General Pulver (Anthony Michael Hall), who has some serious anger issues, and civilian press advisor Matt Little (Topher Grace), as well as a number of other interchangeable characters.

Clearly going for a strong satirical approach to the telling of this story, the film’s not even that funny. Furthermore, it struggles to say anything new or fresh about war that we haven’t already heard before from the numerous military based movies that are in existence, and as a result, War Machine feels hollow and irrelevant. There’s also no particular style or anything visually striking about the cinematography, where there’s a lot of indoor sets, and the ones that are outside are quite enclosed, never letting us get a feel for the environment.

Not only that, the tone is very inconsistent, and for the first three quarters, Michôd takes a light approach, as McMahon struggles to finish this messy and misjudged occupation and leave some kind of legacy. In the third act though, it jarringly becomes more sombre and introspective. Combined with a more serious skirmish, this darker tone comes out of nowhere, feeling very tact on, and totally out of place within the rest of the lampoonery.

What’s more, the writing is very heavy-handed, with no finesse, or a balanced approach to the topics explored. Through Scoot McNairy’s cynical narration, and some on the nose dialogue, there’s a clear biased message towards the futility of the U.S army being in Afghanistan, and the damage they did.

Pitt does his best with the poorly sketched out McMahon, and just about carries the film on his A-lister status, but generally, he looks like he’s struggling to add any depth to this egotistical general. With a gruff and overly exaggerated accent, and a stereotypical buttoned up demeanour, it’s a very caricatured performance.

Regardless, the script does offer him a few moments, mostly with his wife and towards the end, that go a long way in humanising him, and making him more sympathetic. He’s a man with good intentions, but lets his pride and own sense of self-importance get in the way of doing the right thing.

Sadly, the rest of McMahon’s team don’t come off any better, and not one is fleshed out beyond an archetype. Anthony Michael Hall just shouts a lot, and by that reason alone, is the only other memorable character. The others don’t make very believable soldiers, as they spend most of the time getting drunk and slacking off. Again, that has more to do with the writing, with Michôd’s clear focus on attacking the American Military, rather than presenting authentic army personnel. Additionally, high calibre actors Ben Kingsley and Tilda Swinton are wasted in small roles that don’t really have much impact on the story.

‘War Machine is an unoriginal inclusion in this tired subgenre of the war movie. Let down by really heavy-handed writing and poor characterisation. There’s nothing Michôd offers that we haven’t already seen before in better films. Overall, with boring execution, and an unengaging story, not even the star power of Brad Pitt, who does his best, is enough to elevate this film beyond mediocrity.’

← Pirates of the Caribbean: Salazar's Revenge review - nothing special Stranger Than Fiction review - a delightful and heart-warming comedy →