King Arthur: Legend of the Sword review – disposable fun at most 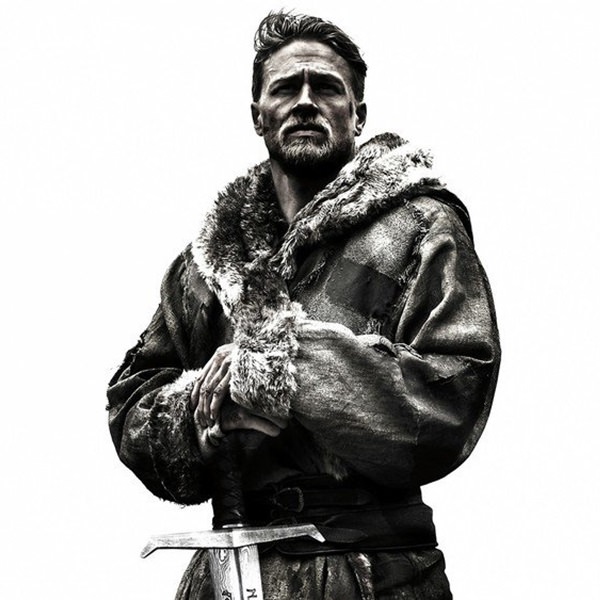 ‘A young Arthur reluctantly claims Excalibur and accepts his destiny.’

After adapting Sherlock Holmes (2009) and the classic The Man from U.N.C.L.E. (2015) series to the big screen, Guy Ritchie is now going back to England’s mythic past and bringing us his reimagining of the done-to-death Arthurian legend. We’ve already had the 2011 TV miniseries and the 2004 King Arthur film starring Clive Owen, not to mention the Disney animated classic The Sword in the Stone (1963), so already Ritchie has an uphill battle in getting his version to stand out, and do something different with this well-known story.

Playing very loose with the legend, the story opens with a battle between the armies of Uther Pendragon (Eric Bana), the king of England, and an evil warlock and his followers. Once the battle is won Uther is betrayed by his brother Vortigern (Jude Law), who covets the throne. He kills the king and queen, but not before they send their young son Arthur (Charlie Hunnam) away from harm. With Vortigem now ruling England, Arthur is found by a group of prostitutes and raised in a brothel where he lives a tough life on the streets and learns how to fight. It’s only when the legendary sword Excalibur reappears that Arthur realises that he must defeat Vortigem before he destroys the land, and claim back his rightful inheritance as king.

Bringing a unique spin and his own signature style of film making, King Arthur: Legend of the Sword is a noble effort by Ritchie, and he show boldness in his attempt to be original. Regrettably, the execution is all off, and we’re given a film that is messy and incoherent, with just moments of competence throughout. One of the main problems is the writing and storytelling. Plot points are raised and dropped with no explanation till much later, if it all, making it hard to follow at times and keep track of what’s going on.

There’s a strong fantasy element added, where magic exists, giant beasts roam the land, and Excalibur itself is an enchanted weapon that imbues superpowers to the Pendragon bloodline. Ritchie infuses a style that feels reminiscent of his earlier work, where most of the characters have cockney accents and give a lot of back and forth, particularly in the way they weave a story and banter among each other.

Combined with fast edits and montages, flashbacks and flash-forwards as people describe past events and future plans, it feels very much like a mashup of Lock Stock and Two Smoking Barrels (1998) and Lord of the Rings (2001). Sadly, these two aspects don’t always mesh well together, making it a jarring experience at times, and like watching two different movies.

Another issue is in its action sequences. With the camera thrown around, and with lots of cuts, it’s hard to make sense of what’s going on. Ritchie overly relies on CGI, which really takes you out of the action, and feels like you’re watching a cut-scene from a video game. He brings a lot of energy, and there are some cool fights, but he just isn’t able to present a coherent set piece long enough to keep the viewers’ attention, or distinguish it from all the other CG bloated and subpar action films.

Luckily it’s not all bad, with Ritchie keeping the tone fairly light and tongue-in-cheek, which goes a long way in keeping King Arthur relatively enjoyable. Like his previous films, most of that humour comes from the characters and their interactions, and he keeps the pace fast and continually moving forward so there’s at least never a dull moment. Visually, it’s a well realised world, with practical sets and good cinematography, which does provide some style, if not substance.

The two central performances from Hunnam and Law are solid, and also help elevate the film somewhat. Essentially an origin story, this Arthur hasn’t become the king we all know from legend. He’s a jack-the-lad type whose lived a hard life on the streets, and Hunnam deftly portrays him as both cocky and vulnerable, especially when it comes to embracing his destiny. He proves rather apt when it comes to his comic delivery, and balances the serious moments and the levity really well.

Law is equally good as the power-hungry Vortigem, and looks as if he’s relishing the chance to play a full on villain. Keeping it just on the right side of hammy and over the top, he comes across as truly despicable, but also makes sure his character slots in with that lighter and adventurous tone of the overall film. Most of the other cast are two dimensional caricatures, who do their best with the little the script gives them.

‘King Arthur: Legend of the Sword was a bold choice, and had great potential to take a well-known story and do something fresh and original with it. Unfortunately, despite a couple of good performances and the right tone, it doesn’t make up for the poor storytelling and an ill-conceived genre blending of fantasy and British gangster films. With the overuse of CGI and poorly shot action scenes, Guy Ritchie’s latest is little more than disposable fun.’