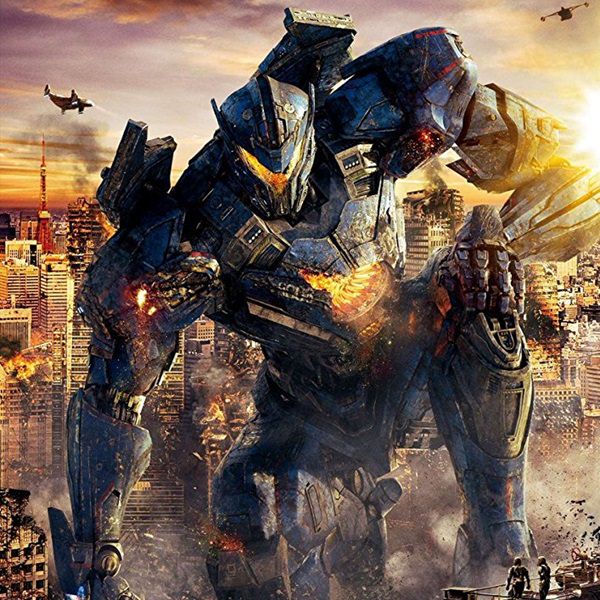 ‘With a new evolution of Jaegers, mankind might just have a chance to stop the new Kaiju threat.’

Guillermo del Toro’s Pacific Rim (2013) was a homage to the giant monster and mecha movies of old. Although not one of his best films, with big bold visuals and giant robots fighting interdimensional aliens, it was still a lot of fun nonetheless. Now, five years later, we’re finally getting a follow up with Pacific Rim: Uprising, which carries on the battle between the monstrous Kaiju and mankind’s giant robots called Jaegers. Taking over directing duties is Steven S. DeKnight, in which this is his directorial debut.

Set ten years after the breach was closed by Stacker Pentecost in the first film, his son Jake (John Boyega) has been surviving by stealing Jaeger technology and selling it on the black market.

When caught, he’s forced to go back to the Pan Pacific Defence Corps as an instructor and train the next generation of Jaeger pilots, including streetwise Amara (Cailee Spaeny). However, joining up with his former co-pilot Nate Lambert (Scott Eastwood), he soon finds himself face-to-face with the Kaiju once again, who have somehow discovered a way back to earth, involving a shady company and a rogue Jaeger called Obsidian Fury.

Let’s be honest, if you’re watching this film, it’s hardly going to be for its intricate story, in-depth characters and original writing. No, if anything you’re likely watching Pacific Rim: Uprising purely to see giant monsters and giant robots tear each other apart, and that’s exactly what you get. This is the very definition of a popcorn movie, loud and dumb but a lot of fun, requiring you to switch off your brain and embrace your inner nine year-old for a couple of hours.

There is some attempt to create an interesting story, but really, with everything wrapped up neatly in the original film, it all feels like a flimsy excuse to have the Kaiju and Jaeger carnage all over again. Making Boyega’s character the son of Idris Elba’s from the previous instalment also feels like a haphazard way of connecting the two stories on a personal level. The problem is, he wasn’t even mentioned or made reference to in that first movie, so it’s hard to get invested in that dynamic. It comes off pointless and unnecessary, adding a relationship in the hopes of bringing depth to this archetypal maverick with daddy issues.

Actually, that’s one of the film’s main flaws, the characters. Most of them are paper-thin and barely function as people, giving the impression of being there just because they have to be. Otherwise DeKnight would have no plot to build around the action. The actors are all fine, but they’re not given much to work with, and they clearly struggle going beyond the material. As a result, personal journeys are kept to a minimum and are sped through so you never get a sense of who they are, or have any emotional attachment to them.

In terms of the lead cast, Eastwood is okay as Ranger Lambert, but seems to have an antagonistic relationship with Pentecost for no reason that lasts for more than a few minutes. Boyega is likable and brings a roguish charm to his character, and he has a nice brother-sister bond with Spaeny’s Amara, even if it does feel rushed. Returning characters Newton Geiszler (Charlie Day) and Hermann Gottlieb (Burn Gorman) are also wasted and misused, particularly when it comes to Day’s ark. These are bland and uninteresting characters whose development is by far the worst part of the movie.

Yet, despite the lack of story and focus on character, DeKnight knows what kind of movie he is making, and he compensates those negatives with the city-destroying battles. They are incredibly entertaining sequences, and probably what most audiences will come for anyway. Unlike the original, where a lot of the set pieces were during the night and hard to see, almost all of the action sequences in Uprising take place in broad daylight. This means we get to see the destructive mayhem in all of its glory, and take in every punch and plasma cannon hit. Clearly a lot of the budget has gone into the visual effects, and DeKnight definitely makes the most of it. Lighter as well, there’s a comedic edge that fits the general tone more.

‘If you’re looking for a good story and engaging character’s, Pacific Rim: Uprising isn’t the film for you. Likely though, if you were a fan of the first film and are looking for more of the same, then you’ve probably already made your mind up that you’re going to like it anyway. With giant robots fighting giant monsters, this is dumb fun at its best.’