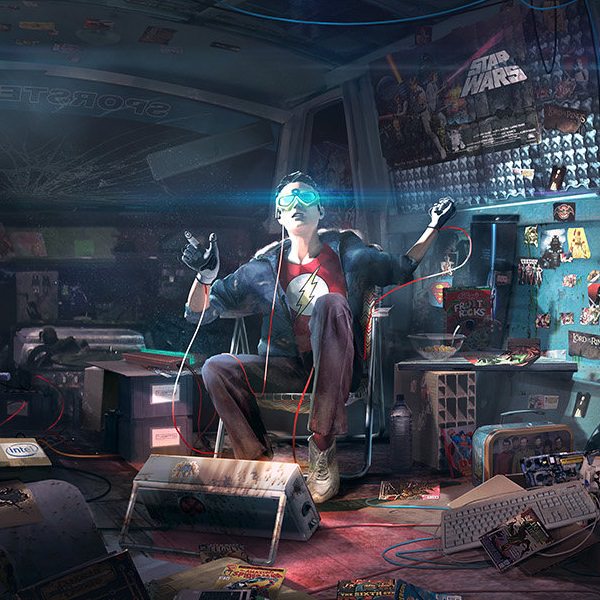 ‘When the owner of a virtual world called OASIS dies he leaves his immense fortune to the player who can find a hidden digital Easter Egg.’

After a string of historical dramas, Steven Spielberg returns to the sci-fi genre in Ready Player One. You could say it’s the genre that made his name, with films like Close Encounters of a Third Kind (1977) and E.T. the Extra-Terrestrial (1982) cementing him as a master film maker over the past forty years. Proving the perfect choice then for Ernest Clines bestselling novel, it also taps into his own legacy and plays on the impact he’s had over those decades. Mostly due to it being set in a future landscape where everyone is obsessed with 1980’s and 90’s pop culture, which arguably Spielberg himself has had a hand in creating through the various films he’s directed and produced over that period of time.

The story takes place in 2045, where much of the earth is in ruin due to overpopulation, pollution and corruption. Like most of the world, Wade Watts (Tye Sheridan) finds escape from this bleak future by plugging into the OASIS, a giant virtual universe where you can be anyone you want, and engage in numerous activities to do with work, entertainment and education. When James Halliday (Mark Rylance) dies, the creator of this influential world, he kicks-off a game in which the winner will inherit total control over the OASIS. Along with allies, including love interest Samantha (Olivia Cooke), Wade attempts to find the hidden Easter Egg that will win the game before evil corporation IOI does, led by Nolan Sorrento (Ben Mendelsohn).

Ready Player One is a light, breezy, fun adventure film, that is elevated by the fact it’s directed by Spielberg. Indeed, this is a movie tailor designed for his style, and everything about it feels like one of his classics from the Eighties. Even the score is by Back to the Future’s Alan Silvestri which was itself produced by Spielberg, giving off a very familiar vibe to his previous work. He also utilises the iconic DeLorean in some scenes. Saying that, despite the marketing have you believe this is nothing more than a nostalgia soaked love-fest, there is a decent and engaging story to follow, and an interesting world to explore as well.

Considering how far VR technology has progressed in the past few years, and how more popular it has become, this is a future that doesn’t seem that far-fetched. Consequently, although not its main intention, it brings up some thought-provoking questions about where we’re heading as a society and the role technology has in this future. Where you can change who you are and reinvent yourself in this digital world, which isn’t that different to what people do these days. The way it’s presented also feels more realistic than most other films that tackle virtual reality. There’s no plug in your brain or altered biology to make it happen, but it works all through external gear, which is the way it’s going now.

As a big chunk of the movie takes place in a digital world with everyone competing in a game, it’s very much structured like one. Tasks have to be completed, riddles solved, and keys have to be found that will lead to winning the prize. In-between all of that are outlandish shoot-outs and insane car races that are only limited by the imagination. Due to Spielberg managing to secure the rights to all these other properties, we even have a great sequence set in the Overlook hotel from The Shining (1980), played out like a Resident Evil game.

When it comes to the visual effects used to bring the OASIS to life, they are excellently rendered. Really, it could only be done now, at a time when motion capture technology is seemingly at the height of its powers. Clearly, a lot of care has been taken to bring this world to life, where the digital avatars of the characters are so life-like and expressive, that they feel just as real as their human counterparts. Combined with so many mind-bending action set pieces at a breakneck pace, this is just as entertaining as it as visually mesmerising. Constantly in a state of motion, there’s plenty of excitement, that the rather long 140 minute runtime will whizz by in no time.

Aiding in bringing Ready Player One to the big screen, are also the well-written characters. Sheridan makes a likeable lead as the enthusiastic Wade, and he brings a lot of heart to this down-on-his-luck teenager who sees the OASIS as a form of escape from his hard home-life. He gives a great transformative performance, as he goes from someone who sees the game as a way to selfishly change his circumstances, to someone who sees the bigger picture, and what’s truly at stake.

It’s not just Sheridan who’s good, but he’s supported by a great cast who all bring something different to their roles. Cooke is great as Samantha, and she’s more than just the love interest for Wade, but has her own goals and motives. She adds a strong independent streak to her character, and is just as important to the story as the male lead. Mendelsohn equally makes a formidable foe. Representing corporate greed, he’s an old-fashioned Eighties villain, and he looks like he’s having a lot of fun, also bringing some light humour to his character as well.

‘In the end, that is what this movie is all about, having fun and engaging in some escapism for a couple of hours. Ready Player One is Spielberg going back to his roots in a very literal sense, offering a sci-fi that also honours the past. Children of the Eighties and Nineties will particularly find a lot to like, but ultimately, all who watch will find an immensely entertaining action adventure movie, with some thrilling action sequence.’