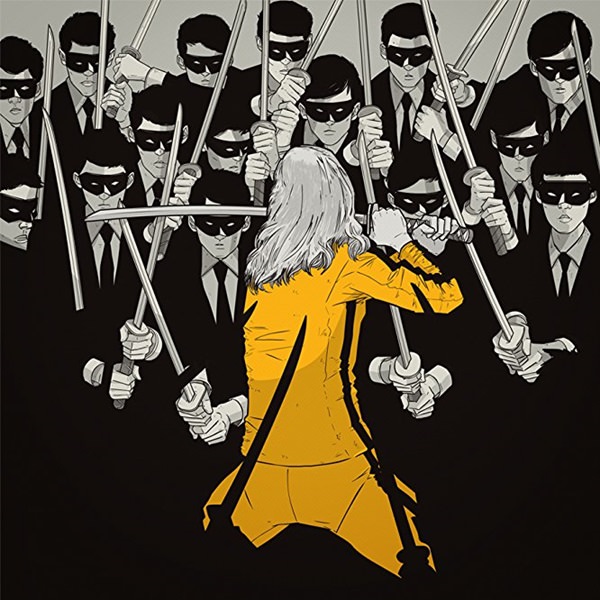 ‘A former assassin seeks revenge after being attacked and left for dead at her own wedding.’

Death wish (1974), Payback (1999), Oldboy (2003). The list is endless when it comes to the revenge film, which has been around for decades and continues to be such a crowd-pleasing genre among audiences. Indeed, there’s something immensely cathartic about seeing a wronged protagonist take the law into his own hands and seek bloody retribution against his or her enemies. It’s such a universal concept, and maybe that’s why it’s so popular. That we get to vicariously live out a fantasy we can all relate to, and get back at those who have crossed us.

On that note, after his third film Jackie Brown (1997), controversial film maker Quentin Tarantino took a six year hiatus from directing and writing only to make up for it by offering us his epic revenge movie Kill Bill. So epic was it in fact, that he ended up splitting it into two volumes, and together, they make up a four hour journey of one woman’s quest to kill all those who left her for dead at her own wedding.

Like most revenge flicks, the story’s simple enough. Uma Thurman’s ex-assassin, known only as The Bride in Vol. 1, is shot at her own wedding by five associates from her previous gang, the “Deadly Viper Assassination Squad”, including ring leader and former lover Bill (David Carradine). When she awakens from a coma four years later to find herself the only survivor, she sets out on a globe-trotting mission of revenge, saving Bill for last.

Together and separately, these are great films, both full of Tarantino’s trademark signatures and troupes we all know and love. Troupes like non-linear storytelling, an emphasis on dialogue and conversation, plus excellent soundtrack choices that become just as integral to the film than any other element. All these stylistic choices are accounted for in Kill Bill, making it unmistakably a Quentin Tarantino film, while also feeling very different to anything else he’s done at the same time.

As with most of his films, he wears his homages on his sleeve, and both volumes are an amalgamation of the genre’s he clearly has a lot of love and passion for. Long stand-offs with extreme close-ups of characters eyes are ripped right from Sergio Leone’s spaghetti Westerns. Japanese cinema also has an influence, with 1973’s Lady Snowblood having a strong presence in some of Tarantino’s directing and storytelling choices. We see this particularly in the character of O-Ren Ishii (Lucy Lui), one of the assassins on The Bride’s list, and their final showdown in the snow. If that wasn’t enough, he also does an entire flashback scene in anime.

The tributes don’t stop there though, and in Vol. 2 he gives over a portion of time to classic Hong Kong cinema and Kung Fu films, including a training montage. Even The Bride’s yellow tracksuit, helmet and motorcycle resemble the ones used by Bruce Lee in the film Game of Death (1978). There are other influences littered throughout, like the old exploitation and grindhouse movies of the Seventies. As a result, some might argue there’s no originality to Kill Bill, but Tarantino manages to beautifully combine these numerous genres to create something unique.

Despite this being considered one long film in his eyes, stylistically, Tarantino makes the two volumes very different. In pace and tone, Vol. 1 is more the conventional action film, in which he utilises stunt choreographer Yuen Woo-Ping to provide some amazing and well filmed set pieces. Not known for his need to cater to the masses, he also goes full R rated so blood can be sprayed everywhere and limbs dismembered left right and centre. Before we get there though, he shows great restraint, as the first two acts are more a build up to a whole third one of literal non-stop carnage, providing a great pay-off and reward for the audiences patience.

Vol. 2, on the other hand, is more a typical Tarantino film. With a longer runtime and a slower pace, there’s an emphasis more on characters conversing, and verbal conflicts rather than physical one’s. No one does dialogue like Tarantino though, and these interactions are just as engaging as the action scenes he litters throughout the second volume.

At the centre of ‘Kill Bill’ is Uma Thurman’s The Bride, who does an amazing job of presenting this ruthless assassin with a one-track mind. For most of Vol. 1, Tarantino holds back on her character development and focuses on portraying her as this force of nature who everyone is terrified of. Thurman completely nails it in the action scenes, especially considering she has to perform a variety of fighting techniques and handle different weapons. She comes off as revenge personified and brings an element of justice to the gratuitous violence.

Clearly inspired by Clint Eastwood’s “Man with No Name” character from the spaghetti Westerns, she says very little but is able to convey a range of emotions. It’s not until the second volume we get to see her fleshed out more and even given a name, and Thurman skilfully brings a softer side and vulnerability to her, while at the same time never undermining the killer we know she is.

Although The Bride is the focal point, there is an array of other characters that all help bring this world to life. Like John Travolta in Pulp Fiction (1994) and Robert Forster in Jackie Brown (1997), Tarantino has made a trend of taking down-on-their-luck or forgotten actors and giving them a chance to shine again. Carradine is that actor in Kill Bill. Mostly known for the character Kwai Chang Caine on Seventies TV series Kung Fu (1972-1975), he’s perfectly suited as the seasoned leader of this Assassin Squad. Charming and deadly, you’ll both be enamoured by, and terrified of him. All the other actors like Daryl Hannah, Michael Madsen and Vivica A. Fox all do splendid work in filling out the rest of the squad, and each bring something different when facing off against The Bride.

‘Kill Bill is a revenge film of epic proportions, blending various genres and filming styles to make something that still manages to feel original. Tarantino also proves a competent action director as he presents some of the most bloody and exhilarating set pieces on film, combined with an amazing soundtrack no less. With a wholehearted and committed performance from Thurman, we arguably have one of Tarantino’s most iconic creations in The Bride.’