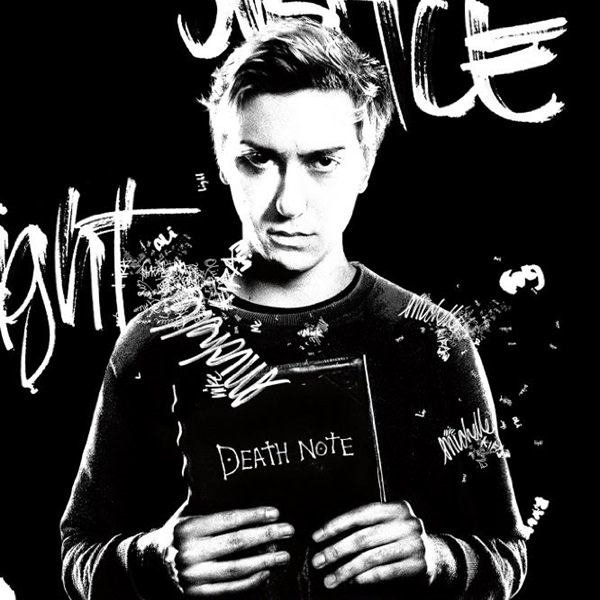 ‘A high school student discovers a mysterious book that has the power to kill anyone whose name is written within its pages.’

Back in 2006, Death Note (2006-2007) was originally a thirty-seven episode anime series about a high school student and his mission to rid the world of all evil via a magic notebook. Despite the lack of action, it had a riveting cat-and-mouse premise between two highly intelligent individuals, which was utterly compelling and kept you coming back episode after episode. Now, just a few months since manga remake Ghost in the Shell (2017), we’re getting another live action version of a popular anime, this time as a Netflix original.

Directed by Adam Wingard, this iteration of Death Note is set in Seattle and stars Nat Wolff as high school genius Light Turner. When a strange notebook falls from the sky stating that whoever’s name you write in it will die, Light thinks nothing of it. That is until god of death Ryuk (Willem Dafoe) appears to him and makes it plain that what he holds is far from fake. Intoxicated by the power, he creates the alter ego Kira, and alongside like-minded girlfriend Mia (Margaret Qualley), begins killing off criminals on a global scale. Not long after though, law enforcement agencies across the world start investigating the killings, with the help of a renowned detective known as L (Lakeith Stanfield) and Light’s own police officer father (Shea Whigham).

As someone who’s familiar with the source material, it will be hard not to compare the two, as I’m sure most fans of the anime will also find. Obviously, a lot of the plot is condensed, and although things are set up for potential sequels, a lot of the original’s dense story is still stripped down to its barebones and squeezed into a 100 minute movie. What’s more, liberties are taken with the story and the writers change a lot of the characters motivations and personalities, as mentioned, probably to package everything neatly within the shorter film format that TV doesn’t have to worry about. There’s clearly too much story to tell, and as a result, Wingard is left with no choice but to take out a lot of the mythology and intricacies that made the series compulsive viewing.

Be that as it may, if you’ve never heard of the television series, or if you can watch it and treat it as a standalone film, there is some enjoyment to be found in Death Note. For one thing, Wingard proves a deft hand in bringing the more supernatural and fantastical elements to the forefront of the story, while at the same time, not undermining that cat-and-mouse premise between L and Light. Similar to his previous films The Guest (2014) and You’re Next (2011), he also brings a lot of energy and a distinct visual flare that really brings the city of Seattle alive.

Combined with a bold and Eighties soft rock soundtrack, he also adds something different when compared to the anime. In short, he alters the tone and style and makes the movie his own. Putting his own stamp on it, he makes it clear that despite the film being based on an already existing property, this will be a Wingard film first foremost, and will have his fingerprints all over it.

Although not as thematically rich as the TV series, Wingard does make the most of the premise by exploring the morality of such a notebook and the power it gives. We’re practically forced into Light’s shoes and asked what we would do with such seeming omnipotence.By looking at the two opposing worldviews of L and Light, the film examines what real justice is, and if what Light does, is anything but murder.

All the actors do solid work with these roles and themes, especially the central ones. Again, many fans of the anime might not like the characterisation and the different places the writers take them, but that’s not to say they do badly with the script they’re given. Wolff is good as Light and is given far more sympathy than his animated counterpart. He shows considerable range as a young teenager who has a very black-and-white view of the world.

Even with the pace and structure skipping over a bulk of Light’s turn from smart emo kid to sociopathic vigilante, Wolff handles it well nonetheless. Equally, Stanfield is a competent actor, and his L is a sufficient foil to Light. likewise, even though the story takes a lot of his backstory out, he still manages to show some emotional depth when needed, helping the audience get on board in accepting this off-putting character.

Qualley and Whigham are fine in their performances, but feel like they’re there more because they have to fulfil certain roles for the plot to move forward. Whigham is basically that moral centre in Light’s life and is the reason L comes into his orbit in the first place, and apart from third act turn, Qualley is purely a love interest for the main character, like all typical Western films. Ryuk is probably the only character who’s most like his anime version, and Dafoe does a great job in bringing a playful and menacing tone to his voice and facial expressions, through motion capture performance. Wingard nails his motivations as this ancient god of death who really doesn’t have a side, and just enjoys the chaos that unfolds. Sadly then, it’s a shame we don’t see a lot of him, probably due to budget constraints.

‘Death Note will likely be a frustrating experience for fans of the original, with the term “very loose” appropriately applied to this adaptation. Stylistically, this is a very different movie when compared to its predecessor, probably to make it more palatable for American audiences. Due to a shorter runtime, the dense story is stripped down, taking away a lot of what made the anime so riveting. However, if you can watch this as a separate entity, it does have entertainment value and a fascinating concept. Also, if it points people to the anime and gets them into that unique and beautiful format of storytelling, that’s only a good thing.’

← What Happened to Monday review - a well thought out sci-fi film Kill Bill: Vol 1 review - a rip-roaring rampage of revenge →