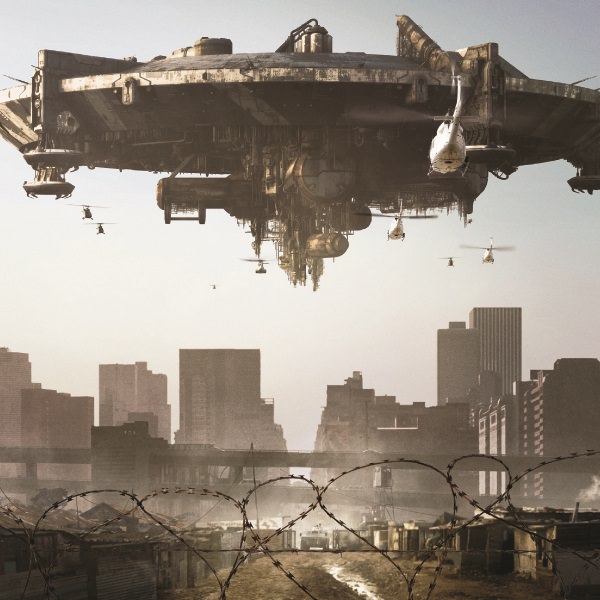 ‘An alien race forced to live in a militarized ghetto outside Johannesburg finds a kindred spirit in a government agent.’

For his directorial debut, Neill Blomkamp’s District 9 is not only a great low budget sci-fi action film, but also works as a social commentary on his native South Africa’s dark past. Co-written by him, he explores the themes of humanity, xenophobia, and social segregation, all through the lens of refugees from outer space. By taking recent history, and throwing aliens into the mix, he’s created a fascinating world not far removed from ours, and he smartly sets it up in the format of a documentary, adding another layer of authenticity, and giving the feel of watching real history unfold before us.

We’re told that in 1982, a giant space ship appeared above the city of Johannesburg, having apparently broken down. When the government go to investigate, they find a race of aliens now stranded on Earth, seeking refuge. Given the derogatory name “prawns”, due to their appearance, they’re moved to a place just outside the city called District 9.

The main story picks up twenty eight years later, where District 9 has turned into a slum town. Following years of boiling tension and distrust towards these unwelcome visitors, the government hires private military outfit Multinational United, to relocate the aliens to a new encampment. Bureaucrat Wikus Van De Merwe (Sharlto Copley) is tasked with leading the relocation, but when he accidently ingests an alien substance, he starts undergoing a strange transformation. Suddenly, he finds himself on the side of the “prawns”, and has to fight against Multinational United, who’s motivations are from benevolent.

It’s an excellent film, made even more impressive by the fact this is a debut, although it probably doesn’t hurt to have the backing of Peter “Lord of the Rings” Jackson, who also served as producer. One of the things Blomkamp does to help his film standout and excel, is by taking a unique approach to the alien invasion genre. Instead of having the extra-terrestrials as the antagonists, he switches it around, and shows the darker side of humanity.

This isn’t really an invasion but a cry for help, and rather than aid them, we are the ones seeking to exploit the aliens, and the advanced technology they bring. Clearly paralleling racial segregation, we get to see mankind’s potential for cruelty, as they separate these other beings from themselves, looking at them with hatred, or worse indifference. We get a clear picture of this view, where in one scene, the relocation team burns down one of the alien’s home with their eggs still in it, and horrifically laugh as they listen to the popping sound of them breaking.

Using the documentary format is a brilliant way of portraying these very serious issues. Indeed, it brings a lot of weight to what could have been a shallow attempt at adding subtext to a glossy sci-fi film. however, knowing the limitations of such a narrative device, Blomkamp skilfully blends standard third person storytelling throughout, and as the film progresses, the documentary style is virtually abandoned completely. With this technique, Blomkamp is able to show a lot more action scenes towards the end, but the transition is so subtle, that it still feels like we’re watching real-life footage without undermining both formats in any way.

Not only is District 9 a breakout hit for Blomkamp, but it also put Copley on the map too. As Wikus Van De Merwe, he’s a snivelling, obnoxious, and ignorant individual, who embodies all that is wrong with humanity. Looking at the alien population with indifference and mild disdain, he’s a character who’s really hard to like and sympathies with. Thanks to Copley’s brilliant performance though, we really see Wikus grow into someone slightly more heroic.

He does a fantastic job of grounding this transformation, where it feels believable, and not just a sudden turnaround. He’s not seen the error of his ways, and that ingrained mindset doesn’t just change overnight. This is a well written character, with Blomkamp inserting a twisted sense of irony into Wikus’s ark, as it’s through his gradual loss of humanity, that he becomes more humane.

Despite the low budget, District 9 is quite a special effects heavy film, and Blomkamp utilises them very effectively. Having that documentary aesthetic does help in blending the CGI with the practical really well, and the way that ship hovers over the city skyline is an especially striking image. Also, the creature design is aptly rendered, and even through their other- worldly and weird looking exterior, they’re still given very expressive eyes, and made relatable.

Christopher in particular, as the main alien character is sharp and intelligent, and Blomkamp does a superb job of getting us to care and cheer for him. What’s more, all these effects are combined to provide some great action sequences, which are viscerally exciting and skilfully directed. These set pieces are also enhanced by the well-developed protagonists, getting us emotionally engaged and invested in the outcome.

‘District 9 is an awesome sci-fi film with an original and fresh perspective on a first contact scenario. There’s no denying Blomkamp’s skill as a director, with his debut showing us how to stretch limited resources to make a good looking, and action packed movie. It’s further proof that a two hundred million dollar budget doesn’t always equal a good film, with District 9 being a prime example, as it towers above many of the more expensive blockbusters.’

← Despicable Me 3 review - a good time killer for the kids Spider-Man: Homecoming review - a return to form for the wall-crawler →