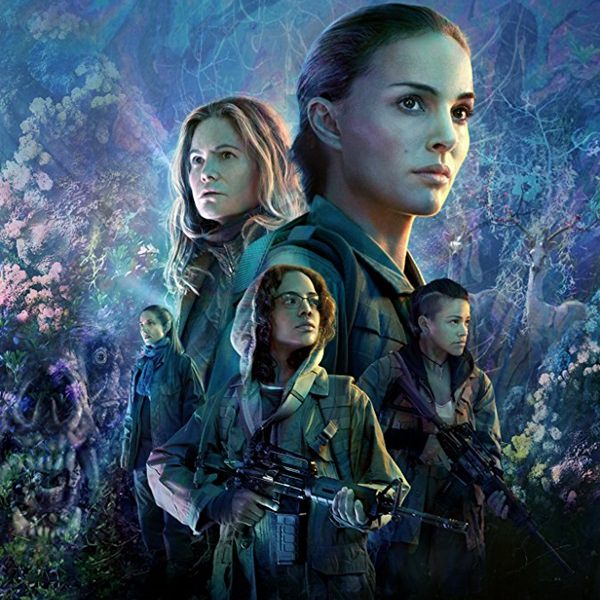 ‘A biologists signs up for a secret mission into a mysterious environmental disaster zone.’

Screenwriter Alex Garland’s directorial debut, Ex Machina (2015), was an excellent piece of science fiction that explored the nature of humanity and our fascination with artificial intelligence. It was a smart, well written and philosophical film that made the most of its high concept, getting audiences to think as well as entertain them.

For his second movie, Annihilation, he does the same, going even bolder and more ambitious in his execution, and providing a real head-scratcher for sci-fi fans to sink their teeth into. Paramount studios sold the international rights to Netflix, so if you’re outside North America and China, you can now stream Annihilation in the comfort of your own home.

Loosely based on Jeff VanderMeer’s novel, the story is told through flashback by Natalie Portman’s biologist and former soldier Lena. Being debriefed, she recounts her experiences of an expedition into a strange quarantined area known as the Shimmer, in which all who enter, never come back. She is joined by physicist Josie Radek (Tessa Thompson), paramedic Anya Thorensen (Gina Rodriguez), geologist Cass Sheppard (Tuva Novotny) and psychologist Dr Ventress (Jennifer Jason Leigh). They all go in for their own various reasons and motives, but Lena goes in with the intention of finding out what happened to her husband Kane (Oscar Isaac), who was on the previous expedition.

The best way to watch this movie is to go in as cold as possible, and with the trailer selling it as something completely different to what it is, if you’re looking for a conventional sci-fi action film, you’ll be sorely disappointed. Annihilation is a far more elusive watch, filled with ambiguity and perplexity, where it raises more questions than it answers. Yet, this isn’t to the movie’s detriment, and in fact, it’s a provocative, mind-bending experience that will have you fully engaged into the world Garland has laid out. Deep, philosophical issues are explored on humanities relationship with nature, their rationale and self-destructive tendencies, all packaged skilfully within this science fiction narrative.

To go with that ponderous tone, is a gradual and reluctant pace, where time is given to the audience to theorize what’s going on right alongside the main characters. Garland doesn’t even rush through the set up in the first act, and he expertly builds the mystery and intrigue before anyone sets foot in this strange phenomenon. He makes sure we understand Lena first, having a sense of her motives and what’s at stake, and likewise getting a feel for the other explorers.

Having more in common with a film like 2001: A Space Odyssey (1968), there’s not a lot of your standard action sequences. However, like his previous film, Garland knows how to create tension and maintain a suspenseful atmosphere with very little. Indeed, with the few moments we do get some action, they are bloody and intense, adding a real horror element that is extremely effective and will have you on the edge of your seat. One scene in particular involving a mutated creature with a bloodcurdling sound, will surely haunt your dreams for nights to come. Not only are they well shot, but they also help propel the story, and aren’t just put in for the sake of it.

The cinematography is beautiful, making this a very mesmerising movie that engages the senses just as much as the mind. This is an alien environment being explored that’s both beautiful and deadly, and Garland holds those contradictions perfectly in the visuals, where viewers will be amazed and terrified simultaneously. Even with some obvious CGI, it still looks great, and slots in impeccably with the Shimmer’s aesthetic. Combined with a hypnotic score, you’ll easily get drawn into this psychedelic and colourful landscape that culminates in a climax that will have you staring into the screen, transfixed in a trance-like state, but enjoying the journey nonetheless.

Carrying the story is Portman, and she does an incredible job as the committed Lena who just wants to find out what happened to her husband. She’s a very pragmatic individual who’s driven by her goals and nothing else, likely coming off as cold and distant at times. Being the brilliant actor she is, Portman aptly infuses just the right amount of sympathy to her character so the audience can still root for her as the protagonist. Like most well drawn out characters, she’s a complicated and authentic person in which Portman superbly breathes life into.

The rest of the cast don’t get as much characterisation, yet that feels intentional to keep the focus on Portman. Having said that, they all do well with what the script does afford them. Leigh is solid as Ventress, the psychologist who profiles and selects the volunteers who go in to the Shimmer. As someone who’s sent numerous people in to their doom over the years, she brings a dullness and apathy to her personality, where she no longer feels anything for anyone, and just wants answers. Thompson, on the other hand, is vulnerable as Josie, and is a very different character to the one she played in Thor: Ragnarok (2017). In the end though, apart from Lena, they all fulfil a role that serves the plot more than function like actual people.

‘Annihilation is a thought-provoking and cerebral experience, that ultimately, won’t be for everyone except die-hard sci-fi fans. Despite that, with an intriguing premise, both beautiful and disturbing visuals, and a great performance from Portman, this is one of those films that will linger with you long after the credits have rolled. Proving Ex Machina was no fluke, it equally cements Garland as a fresh new voice in the world of science fiction cinema, and should get you excited about what he does next.’