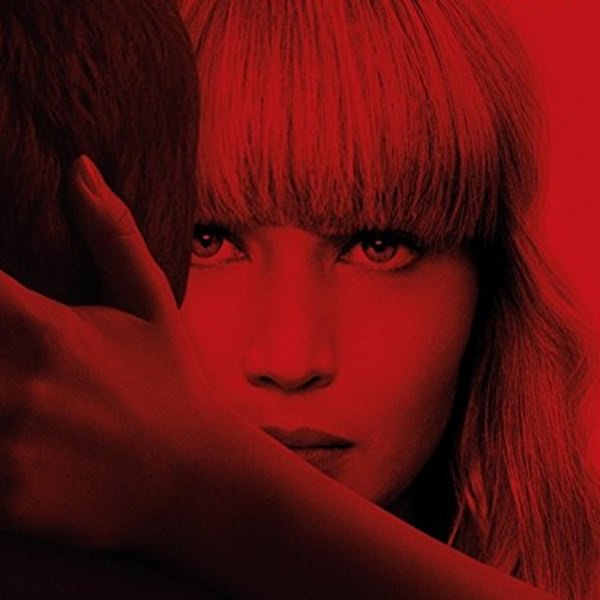 ‘An elite Russian spy is sent to seduce a CIA agent and discover the identity of a Russian mole.’

Francis Lawrence, who directed most of the Hunger Games franchise, teams up once again with Jennifer Lawrence for his latest film Red Sparrow. Instead of a YA dystopia though, this is a grounded and mature movie, set firmly in the world of espionage and covert warfare. A world of spies and secret organisations, where the aim of the game is manipulation and intelligence gathering.

The story follows Dominika Egorova (Lawrence), a famous Russian Ballerina who looks after her sick mother. When she sustains a career ending injury, she is coerced by her uncle (Matthias Schoenaerts) to join an elite training programme for the Russian government in return for her mother’s medication. There, she is taught in the art of seduction and manipulation, and how to use her body and sexuality to get what she wants. Her first mission: to gain the trust of CIA agent Nate Nash (Joel Edgerton) and discover the identity of a Russian mole.

Spy movies about America and Russia are hardly unique, and despite the valiant effort, Red Sparrow doesn’t really bring anything new to the table. The story is full of over-familiar clichés that come with this well-known genre, where double crosses and ambiguous motives are the aim of the game, with loyalties constantly tested and never what they seem. If you can think of a trope common to the spy thriller, you can probably find it here. Shady rendezvous, targets being followed, the use of code names, torture scenes for information, and even a prisoner exchange can all be found here.

Not that these things are bad within themselves, but unless you inject them with some originality or suspense, all these kind of films bleed into one another, making it hard to distinguish between them. Regrettably, that’s exactly what the director does here, as he borrows bits and pieces from other movies and adds nothing fresh to his one. It’s a shame, because there’s a good story here, and the concept of spies being taught in this way is really interesting and has potential.

Actually, the first act where Dominika is being trained is by far the best part of the film, where sex is explored as a weapon, likely raising some provocative questions in our current climate, and in some cases, even offend. Yet Lawrence doesn’t even commit or seem to have faith in that part of the story, but instead rushes through to get to the conventional espionage stuff, which isn’t as compelling.

As a result, the structure feels quite fragmented, with the story not having a good flow to it. This hinders an already complicated plot which isn’t always easy to follow. What’s more, it could have done with ten minutes or so shaved off the rather long runtime, which only creates an unnecessary slow pace and adds to that convoluted narrative. Although based on a novel with a pre-existing story, lots of side characters and plotlines may work for a book, but in a film, this can end up muddying the water if not done well.

However, it’s not all bad, as there’s a lot of style to be enjoyed. Visually, this is an appealing experience where sets and scenes are beautifully constructed. For those who are fans of this genre, there’s still plenty to appreciate, regardless of its over-familiarity. A lot to like is definitely Dominika, and it makes a pleasant change to have a strong, switched-on woman in this type of role. She may be exploited by the men in her life, but the way she switches it around, using those skills for her own needs, is deftly handled. Some might even say empowering. Lawrence gives a solid performance in that transformation, and does a great job of mixing strength and vulnerability, presenting a grounded character we can all get behind.

Outside of Lawrence, there’s an ensemble of other characters that don’t really get enough time. Schoenaerts’ uncle is creepy and disturbed, but is simply an antagonist for Dominika to go up against, with nothing else to him other than that. Likewise, Edgerton does good with what the script gives him, but is pretty much the righteous American who is used as the antithesis to the Russian values. All the other characters are functional at best.

‘Red Sparrow is a stylish thriller that ultimately is let down by an over complicated plot and a series of done-to-death clichés that amount to nothing new. With its only saving grace being Lawrence’s performance and a solid first act, this is a film best viewed by the hard-core fans of the spy movie.’