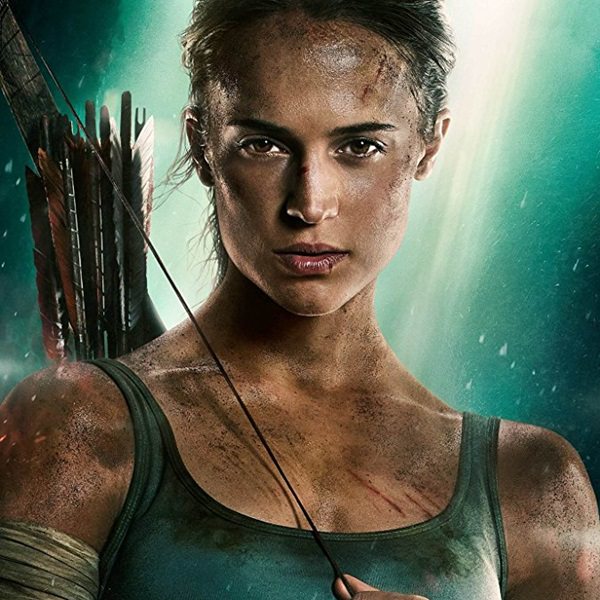 ‘Lara Croft is pushed beyond her limits as she searches for her missing archaeologist father.’

Based on the long running videogame series, Tomb Raider follows the exploits of adventurer Lara Croft, and serves as a reboot to the Angelina Jolie movies, that were far from perfect. The question is, can this new version break the videogame curse, and produce an adaptation that is actually good?

Alicia Vikander takes over the role of this iconic character, and the plot plays out as an origin story of how she becomes the Lara Croft we know from the games. Refusing her inheritance after her adventuring father (Dominic West) is declared dead and been missing for seven years.

Lara finally uncovers some clues to what he was working on. Discovering the location of a mysterious Island and his last known location, she sets sail to find out what happened to him. When she arrives, all she finds is Walton Goggins’ villainous Vogel, hell-bent on finding a mysterious tomb for a shadowy organisation.

This is a far better movie than the previous two adaptations. Gone are the skimpy tight outfits, the obvious objectification of the character, and the cheesy post Matrix (1999) action scenes that everyone was ripping off back then. In fact, although not great, this new reboot is still a serviceable action adventure film which most people should be able to enjoy, especially if you’re a fan of the genre. However, it is clear after watching Tomb Raider that this will mostly be for those who love the games.

For example, one of the things director Roar Uthaug does is actually lean into the movie’s videogame origins, and the structure of the plot feels very much like a computer game. Each scene feels like a level where Lara has to learn a new skill to progress to the next one, which becomes more challenging the further you get into the story. Even certain actions she performs look like something you would have to do or learn if you were playing the game, like rock climbing, swinging on some rope, or jumping across bottomless chasms. Certain sequences also feel like a cut scene, and are used between the action to propel the story and dump necessary exposition.

One of film’s main weaknesses, is its inability to elevate itself and stand out among all the other action adventure movies out there, which the ultimate has to be the Indiana Jones franchise. Sadly, Tomb Raider comes nowhere close to those iconic examples, but that doesn’t stop it from trying so hard to copy their success and blatantly emulate that blueprint. Uthaug doesn’t even make any attempt to hide the third act’s almost beat for beat rip-off of The Last Crusade (1989). The main mystery is interesting, but likewise, has the sense of over-familiarity and a feeling of déjà vu. Basically, it’s a formula we’ve seen countless times before, and the way Lara is drip-fed clues and information that slowly bring her closer to her goal is nothing special.

Having said that, it’s not all bad and there is some fun to be had. This is an action-packed movie, with plenty of high-octane set pieces to keep things exciting, and all done in-camera as much as possible. There’s death-defying stunts, hand-to-hand combat, shoot-outs, and even a bicycle race across London. These are all well-shot sequences that rank up the tension, regardless of some quick cuts and choppy editing to keep that 12A rating. They’re given an epic atmosphere thanks to Tom Holkenborg’s dramatic score, also aided by the fact they’re situations no real person could survive, unless they were in that heightened world so many videogames occupy.

What doesn’t hurt the set pieces, is to have Vikander as the determined Lara. Bringing real commitment to the role, from the very first moment you see her, you can tell she’s trained hard and wants to contribute the appropriate physicality to the character. She does a great job in all her stunts, and really conveys the perils she’s in in a believable way, where you’ll find it easy to buy into the dangers she faces.

Not only in the action department is she competent, but as proved in previous films, she can act, and knows how to present an authentic person who comes across as genuine and real. This isn’t an old-school action hero who somehow doesn’t register pain and can keep getting up like a machine. No, when she gets knocked down you can see the toil it is having on her face and all over her body. With real heart and emotion, Vikander is clearly the best thing in this movie.

Unfortunately, the same can’t be said for the rest of the cast, who are functional at best. Goggins gives a sleepwalking performance for the most part, and looks like he’s just there waiting for someone to write his cheque out. Daniel Wu is okay as Lara’s reluctant ally, and West, although has good chemistry with Vikander, is mostly there to kick-start Lara’s adventure. Great British actors like Kristin Scott Thomas and Derek Jacobi are also wasted, being there to setup potential sequels more than anything else.

‘Tomb Raider is a disposable yet fun action adventure film. What it lacks in originality and a poor antagonist, it certainly makes up with a great lead in Vikander, who definitely raises the material. Combined with practical action sequences mixed skilfully with the visual effects, and a big enough fan base of the games, we might yet see a follow-up on the horizon, and the beginning of a new franchise.’