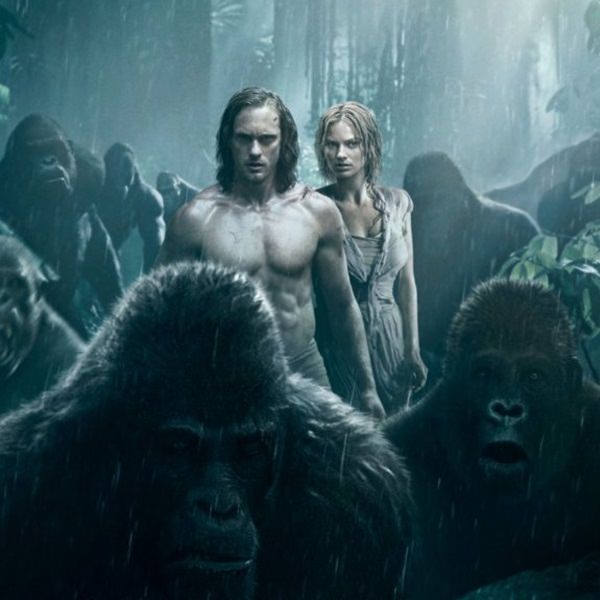 ‘Tarzan returns to the jungle after his wife Jane is kidnapped by Leon Rom.’

Edgar Rice Burroughs creation has been adapted for the big screen so many times I’m surprised there’s still an appetite for Tarzan or if there’s anything new to be added to his story. None the less, David Yates’s, who also directed some of the Harry Potter films, gives it a go, and his take on the character at least brings something a bit different to the table. Instead of another origin story Adam Cozad and Craig Brewer’s script presents us with a tame and civilised Tarzan who has been living in Victorian England for the past ten years with his wife Jane.

It’s a different approach to the character we’re usually presented with. Instead of having a Tarzan who has to learn to connect to humanity, we have the reverse and have him trying to get back in touch with his animalistic side when is wife is kidnapped. As the film progress’s we even have Tarzan symbolically stripping down his clothing as he becomes more attuned with that wild side he left behind.

Unfortunately, besides the original approach, the film is brought down by a sluggish pace and a tone that plays it too serious. The character of Tarzan should come with a light and breezy adventure, more in the vain of Raiders of the Lost Ark (1981), but instead we get a rather brooding affair, more in line with Nolan’s Dark Knight trilogy. Even the colours have been saturated, giving a very dull visual look to what should be a bright and colourful jungle.

Keeping with this serious tone is Skarsgård’s performance. Physically, he is a great Tarzan and clearly spent some time getting into shape for the role. He appropriately displays an imposing presence and you could easily see him fitting in amongst the African wildlife. However, he plays it way too straight, coming off as mopey and insufferable, struggling to portray any kind of charisma. Fortunately, Skarsgård is saved by a very game and willing Samuel L Jackson. As a sidekick to the Lord of Apes he brings that humour and light touch the film so desperately needs and is easily the most entertaining character in the film.

Without him along for the ride, Skarsgård’s brooding Tarzan would struggle to carry the film on his own. Margot Robbie’s Jane is played well but regrettably is used strictly for a damsel in distress role, no matter how hard the writers try to convince otherwise. Robbie plays her strong and independent but shamefully her kidnapping feels purely there as a plot device to propel Tarzan into action. Christoph Waltz’s Léon Rom also is underused as the main antagonist, it’s certainly not his best villainous role and he’s clearly sleepwalking through his performance.

Acting aside, Yates did a good job visually creating a believable African setting considering it was mostly shot on a studio set. Sadly though, in a year where we’ve had Favreau’s excellent re-imagining of The Jungle Book (2016), it just doesn’t quite compare. The visual effects could best be described as average but there are moments when it’s considerably poor, like some dodgy use of green screen. There’s definitely an over reliance on the CGI. Some of the animals are well rendered but some practical effects wouldn’t have gone a miss and could have helped ground the action, particularly that final act where it becomes a CGI mess. Some of the action scenes were poorly shot and edited as well, making some of the fights on display hard to follow.

‘The Legend of Tarzan had a lot of potential, and certainly is one of the better adaptations of the character, but ultimately fails in its task of entertaining.’

There is some enjoyment to be had, with Jackson’s involvement going a long way to elevating this film significantly and adding a much needed shot of humour, but with a bland and boring lead and some dodgy effects is unable to save the film completely.