Ferdinand review – fun for the little ones 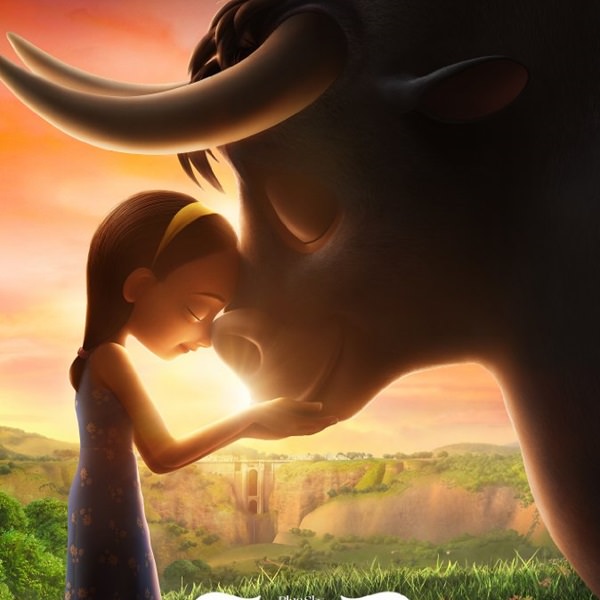 ‘Ferdinand the friendly bull, assembles a team of misfits to escape his new human owner and return home.’

From Blue Sky Studios, the company that’s mostly known for the childish Ice Age franchise, comes their first attempt at something with a slightly more deeper message than they’re usually known for. Indeed, Ferdinand is clearly setting itself up to equal Pixar’s more emotional and mature approach to family storytelling. The question is then, does it succeed in its aim of appealing to the parents, and not just be that time killer so many adults use to entertain their kids for ninety minutes or so?

Set in Spain, the story follows Ferdinand (John Cena), a huge bull, who ironically, has no desire for bullfighting like the majority of his peers, but instead, would rather spend his time smelling flowers and hanging out with Nina, his young human owner. When he accidentally destroys a village, he’s sent to a farm where they train bulls for fighting. Not fitting in with the other animals and desperate to get back home, Ferdinand devises a plan to escape before it’s too late, and he ends up being turned into steak.

Ferdinand is a good effort by the studio to break new ground and compete with the likes of Pixar and Disney. Although it doesn’t come close to those two juggernaut’s, it’s a valiant endeavour nonetheless. For example, there’s a good moral for children about non-violence, and how you don’t always have to let your life be dictated by biology and upbringing. It’s all packaged within a good story, where obstacles are overcome, life lessons are learned, and everything’s wrapped up neatly, offering that warm fuzzy feeling good family films should normally be able to illicit.

Old habits die hard, however, and for every good choice that’s made, there’s also a bad one to accompany it. Director Carlos Saldanha, more often than not, resorts to conventional tropes and elements which are common to a children’s movie that’s just for the little ones. A reliance on an overly fast pace for one thing, including a silly dance-off scene, which may supply a lot of energy and fun for the kids, but doesn’t offer much in entertainment for the grown-ups. Furthermore, the humour, for the most part, is simple and slapstick, and basically designed to get a big laugh from everyone under ten, but at most, a snigger from the parents.

Characterisation is also affected, where all we’re given is basic motivations from each character and a one dimensional trait to help us distinguish them. Even the lead character isn’t developed beyond that outcast type we’ve seen a million times before, whose differences will eventually prove beneficial in the end and earn him the respect of his fellow bulls.

It’s the main relationship between Nina and Ferdinand that could have been the most interesting and compelling dynamic of the movie. Instead though, it’s rushed over in a three minute montage just to quickly get to their separation, and the meat of the story of him trying to get back to her. All this undermines what could have been the very heart and emotion of the film, but Saldanha doesn’t even check in on Nina until the very end, so that relationship feels completely wasted.

On the positive side, the main voice cast do a solid job in bringing their characters to life. Cena brings enthusiasm and sincerity to Ferdinand, this giant with a gentle spirit. He also has a good repertoire with Kate McKinnon’s Lupe, the calming goat with dreams of coaching a fighting bull champion. Despite the writing not giving them much, even the rest of the cast give good vocal performances with the little material their given.

‘Ferdinand does its best, but ultimately, it’s a typical kids film with a few moments of brilliance scattered throughout. Struggling to be more than its Ice Age sibling, this is still a movie that only the young one’s will likely enjoy. Yet, that doesn’t have to be a bad thing, as it will more than appeal to that target audience, and with competent animation, a solid story with a positive message, there’s plenty of fun to be had for your off-spring.’