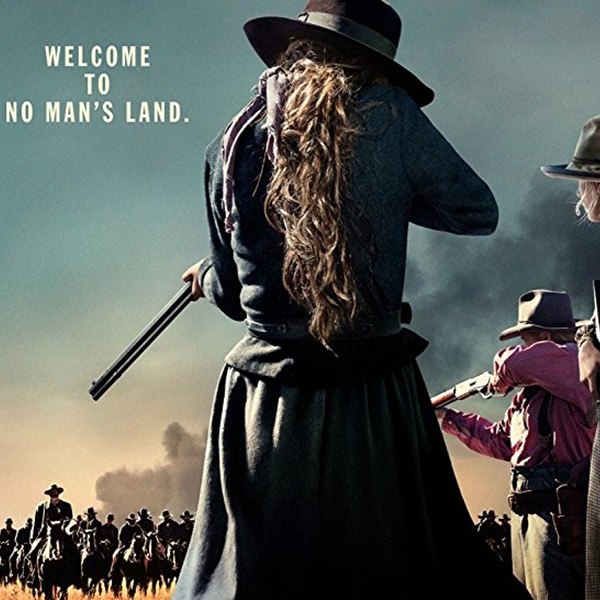 ‘Frank Griffin hunts for Roy Goode and the chase leads him to the town of La Belle, a community populated almost exclusively by women.’

It may have had its heyday decades ago, but the Western can still offer a lot when done well. Stoic gunslingers and ruthless outlaws, all within a desolate and lawless landscape. These are the staple elements of America’s depiction of the Wild West. Sprawling epics which have been portrayed beautifully in films like Sergio Leone’s “Spaghetti Westerns”, The Magnificent Seven (1960), and more recently, Hell or High Water (2016). Now, Netflix series Godless can join the pantheon of this once great genre.

Told through seven episodes, the story centres around the townspeople of La Belle, a community almost exclusively populated by women. Their fragile existence is thrown in turmoil when an injured stranger named Roy (Jack O’Connell) appears at the ranch of widow Alice (Michelle Dockery). With his arrival, a collision course is set in motion between the town and ruthless outlaw Frank Griffin (Jeff Daniels), who has a personal vendetta against the young man.

“Netflix has clearly thrown a lot of money at this series as the production value is exquisite, with a lot of detail going into making this world as authentic as possible.”

Due to its episodic format, Godless is a western that delves deep into its characters. Indeed, creator Scott Frank has a rich tapestry of individuals in which to explore and populate his wild frontier. All the other well-known and loved tropes of the genre can be found here. But with the time to develop fleshed-out characters, it has an edge over some of its contemporary peers. In fact, over the course of these seven episodes, we’re given a good grasp of each of the main characters, and a sense of who they are. No one is wasted, and they’re so well-written, you actually care about them.

Not just full of style, but there’s also plenty of substance to be found in the story, with Frank bringing a very modern approach to some of the series’ themes. Due to a mining accident, the town of La Belle is full of widows, which allows for a natural feminist message to bloom. Many of these women are forced to find hidden strengths they didn’t know they had. Through the course of the story you see this organic growth as they realise they’re just as capable as the men. Merritt Wever’s Mary even begins dressing in men’s clothing and starts a same-sex relationship, adding a highly progressive approach to what is normally a male-dominated genre.

Like all good Westerns, Frank makes the most out of the setting. Visually, this a beautifully shot show with some awe-inspiring cinematography. He expertly manages to bring out that grace and allure through this seemingly harsh environment. There’s wonder to be found in this unforgiving terrain, and every different location has its own charm to be discovered. Netflix has clearly thrown a lot of money at this series as the production value is exquisite, with a lot of detail going into making this world as authentic as possible.

What’s more, if you’re watching this for the shoot-outs and action, you won’t be let down. There are some well-executed set pieces littered throughout which are tense and exciting. However, it’s all building up to a climactic showdown that is well worth the wait. That final sequence is what the first seven hours have been working towards. Everything that’s come before has been a masterstroke in creating anticipation for this ultimate face-off.

The characterisation is deftly handled, but credit has to equally go to the solid performances that bring these people to life. O’Connell does a brilliant job as the reluctant outlaw Roy. With a softly spoken voice yet deadly trigger finger, he balances those two opposing traits skilfully. He has a wonderful chemistry with Dockery’s Alice and her son, played by Samuel Marty. Seeing him become a surrogate father-figure to this downtrodden family is believably presented, adding a lot of heart to the story.

Another stand-out character is Scoot McNairy’s Bill McNue, the sheriff of La Belle. Slowly losing his eyesight, he’s given a really engaging arc of wanting to do this one last job of protecting the town before going completely blind. McNairy is such a stellar character actor and he brings a lot to this honour-driven yet frail lawman. Likewise, special mention has to go to Daniels’ sadistic Griffin. Written as one of those interesting villains, he has a twisted moral code that you could almost find admirable. Daniels aptly gives him a level of complexity you don’t normally see in your average antagonist. Where from his point of view, he’s the hero of his own story and sees Roy as a son who needs disciplining.

‘Godless is a fantastic reminder of what the Western is capable of when given the right story. More than just a cool-looking and stylish series, it taps into issues that feel relatable for modern audiences. With a strong female cast, there’s a good deal to enjoy for both genders. Combined with excellent and clearly thought-out characters, this is an engaging Netflix Original, hopefully creating a new generation of fans for this once beloved genre.’