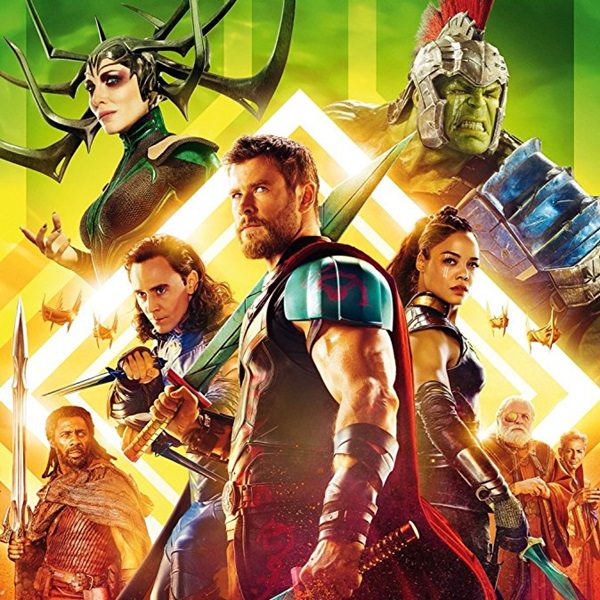 ‘Thor must escape imprisonment on Sakaar, race back to Asgard and prevent Hela bringing about Ragnarök.’

Out of all the MCU films, Thor’s solo adventures have arguably been the weakest of them, and are usually used as table setters for the bigger Avenger based crossovers. However, Thor: Ragnarok looks to change all that with a huge stylistic overhaul, a bigger sense of fun, and the inclusion of a certain Incredible Hulk. It also has New Zealander Taika Waititi at the helm, who recently proved himself with the brilliant Hunt for the Wilderpeople (2016) and vampire mockumentary What We Do in the Shadows (2015). So already this is shaping up to be something special, and likely the best solo adventure for The God of Thunder yet.

Set two years after the events of Age of Ultron (2015), where we last saw him, Thor (Chris Hemsworth) has been travelling the universe looking for the infinity stones. When Hela (Cate Blanchett), Goddess of Death is released from her imprisonment, The God of Thunder finds himself stranded on planet Sakaar, ruled by a dictator known as the Grandmaster (Jeff Goldblum). Forced into a gladiatorial battle against former colleague Bruce Banner, and his alter ego The Incredible Hulk (Mark Ruffalo), Thor must now find a way to stop Hela, before she conquers the universe.

Taking a que from the Guardians of the Galaxy films, Thor: Ragnarok, for the most part, stays away from earth and all its post-Civil War (2016) angst, and is the better for it. There are call backs and references to previous MCU movies, but with a well-structured beginning, middle and end, you could comfortably watch Thor’s latest adventure on its own, and understand everything you need to know contained within its 130 minutes. Yes, it would be handy to know what’s going on in other parts of the Marvel Universe, but really, Waititi balances those two sides so perfectly, that both casual and hard-core fans can enjoy this movie regardless of where they’ve come in. Even Hulk’s inclusion doesn’t muddy the story, and in fact, he’s involvement just adds a great and original dynamic we haven’t seen before.

What also helps this standout as the best Thor film, is that visually, this has a very different aesthetic when compared to the other ones. Where the first two looked very bland and dull, Waititi makes the most of the other-worldly setting, and infuses everything with colour and vibrancy. Indeed, mingled with a really retro and electronic sounding score, this has more in common with 1980’s Flash Gordon than any Marvel movie. Subsequently, this helps inject a fast and energetic pace, where apart from a few moments of stillness, everything is in a constant state of momentum.

This offers a thoroughly entertaining experience from start to finish, which is only aided by the stylish and frenetic action sequences littered throughout the movie. These are exciting set pieces that are well executed, and utilise the various superpowers and weapons on display to bring some fresh and interesting battles. Whether it’s Hela single-handedly taking on an army of Asgardians, or Thor and new character Valkyrie (Tessa Thompson) jumping from spaceship to spaceship, these all help keep the fun factor high. Clearly, there’s a lot of CGI being used, but Waititi gets the balance just right, and it’s seamless in the way he blends them with the practical sets, making sure amongst all the mayhem it always feels tangible and physical.

On top of all that, this is a very funny film, and as shown with his previous work, Waititi knows how to make it very character based. Thor was never the funniest avenger, but here, he feels like a completely different person, and that’s not a bad thing. As proved with Ghostbusters (2016), Hemsworth has great comedic timing and knows how to deliver a line to get the best possible laugh, and he does exactly the same here. He has a great chemistry with both Banner and Hulk, and their partnering with Thor works so well, that it’s surprising they didn’t think of it sooner.

Ruffalo, as always, is fantastic as the green, rage-filled monster, and giving him a bigger vocabulary was a stroke of genius, adding more depth and humour to his character. If there’s one tiny flaw, it’s that Waititi focuses so much on making his film as hilarious as possible, that it undermines some of the more heartfelt moments and character development. It’s a small nit-pick though, and even Hela, who also suffers as a typical world-conquering antagonist works, with Blanchett looking like she’s having such a blast playing this over-the-top villain, you won’t help but get into it anyway.

Really though, that’s the aim of this movie, to homage those colourful and campy sci-fi’s from the Eighties, with its scenery chewing performances and heavy metal soundtrack. Most of the other main cast are solid in their performances, and despite an over-crowded movie, Waititi makes sure their character’s all get a moment to shine.

‘Apart from some minor character issues, Thor: Ragnarok is another excellent film from the MCU, as the studio continues to cement itself as the best example of how to do a shared universe. With tons of style and a brilliant sense of humour, including Waititi’s Kiwi deadpan approach, this is a movie that will be enjoyed on multiple levels. By giving him more of a personality and an interesting team-up with the Hulk, The God of Thunder can now be seen in a whole new and better light.’