Stranger Things review – a TV masterpiece set in the Eighties 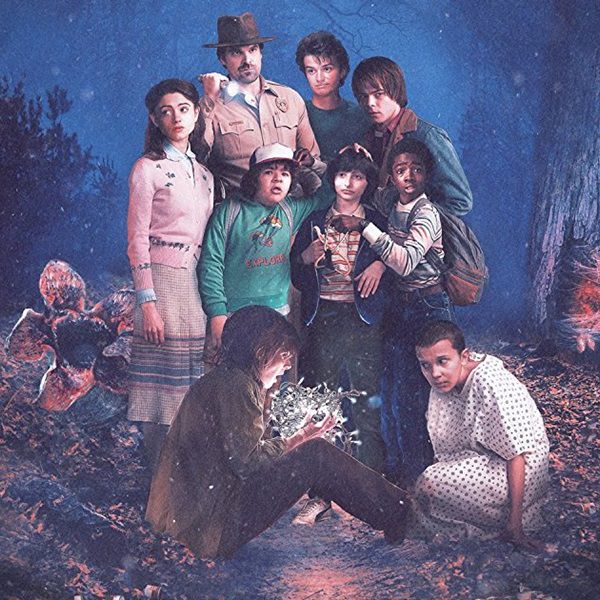 ‘Three school friends band together to find their friend Will who has gone missing in mysterious circumstances.’

Netflix’s original TV show Stranger Things, created by The Duffer Brothers, can best be described as science fiction horror, but really, it’s so much more than that, and is a great series everyone’s going to be talking about. So, what is it about this show that everyone’s going to love? Well, for starters, it’s going to be the fact that the sibling duo have set their creation in the early Eighties, tapping into the recent zeitgeist of nostalgia obsession, and paying homage to that most beloved of decades. Indeed, everything from Stephen King to Steven Spielberg is referenced, with movies like E.T. the Extra-Terrestrial (1982), Stand By Me (1986), and many many more getting visual shout outs and nods throughout the series.

The story takes place in the small middle American town of Hawkins, and follows young school friends Mike (Finn Wolfhard), Lucas (Caleb McLaughlin), Dustin (Gaten Matarazzo) and Will (Noah Schnapp), who like nothing more than hanging out and playing Dungeons and Dragons in their parent’s basement. When Will mysteriously goes missing though, they work in secret alongside the adults, including desperate mum Joyce (Winona Ryder) and police chief Hopper (David Harbour), to help find their friend. However, what they discover, is a government conspiracy involving parallel universe’s, monsters, and a strange girl (Millie Bobby Brown) with super powers and the number eleven tattooed on her wrist.

A big part of Stranger Things success is definitely down to its extremely romanticized view of the era it’s set in. Creating an appealing ambience of all those classic films The Duffer Brothers unashamedly wear on their sleeve, everything about this show is purposely designed for all those looking to relive a more simple and innocent part of their past. From the grainy opening credits, the very retro synthesized score, and the excellent period production design, this is dripping with Eighties nostalgia that will drag everyone of a certain age in, and have them hankering for their childhood back. With board games, VHS, walkie talkies, and playing outside without adult supervision on display, anyone who grew up during this time period, will no doubt be playing the I-remember-that game while watching.

Smartly, The Duffer Brothers don’t just coast through on their homages and tributes, but make sure they have good story and characters to work with as well. Tonally, they end up blending numerous genres together like horror, science fiction, mystery thriller, and even coming-of-age, and yet, it never feels messy and all over-the-place. In fact, all these elements are melded so perfectly, that they create something that might broadly feel familiar, but still feels fresh and original. On top of that, the narrative is suitably paced and structured for Netflix’s binge-watching model, and after each episode’s cliff-hanger ending begging you to click on the next instalment you’ll be through the series in no time.

With great cinematography, this is also a good-looking series, filmed in the style of the era it was set in. Actually, if it wasn’t for the more modern special effects, including CGI, you’d easily believe you were watching something that was made in the early eighties. Speaking of which, as a story about a dimension-hopping monster, and a child who has telekinesis, there is a fair amount of visual effects on display.

Thankfully, they’re all skilfully executed, and with some solid set pieces, offer a variety of tense and nail-biting sequences. Whether it’s our young heroes being chased down by government vans, or having to fight a vicious creature from an alternate reality, these are all scenes that will have you on the edge of your seat and fully invested.

Despite all these excellent components that have been superbly utilised to bring this world to life, it wouldn’t be as half as good as it is if it weren’t for the brilliantly fleshed out characters, and the actors that bring them to life. One of the main benefits of serialised TV over feature films, is that you have the time to develop really compelling and layered characters, and that’s exactly what The Duffer Brothers do here, especially when it comes to the young teenagers. These are well-written and believable prepubescent children, who act like real authentic kids you could find anywhere. They curse, have in-built codes within their friendship group, and they have each other’s back as well as fight amongst themselves.

As a result, there’s a lot of emotional heavy-lifting these youngsters have to do, but fortunately, The Duffer Brothers really lucked out with their child cast. Truly, they all provide fantastic performances, showing a great deal of range and having excellent chemistry with each other. Presenting a real comradery, these classic nerds look out for each other, and each one of them bring something different to the table. Standing out though, has to be Brown’s enigmatic Eleven. Being someone who’s been brought up in a secret lab all her life and experimented on, she doesn’t have a huge vocabulary, and therefore, has to say and express a lot with little to no dialogue, which she nails every time she’s onscreen. Her ability to transition from vulnerable victim to cold hard killer is faultless, as your both sympathise with her, but also be terrified by what she can do.

It’s not only the kids though that get the spotlight, and equally, the adult characters feel just as well-rounded. Ryder may have to hit that one beat of constantly on-the-edge mother, but she does it so well. Harbour likewise, does solid work as the everyman police chief who’s seen it all. He comes with a tragic past, and he brings a lot of layers to this small town cop. Really, all the main characters get a decent arc over the seasons. Even Joe keery’s typical eighties bully gets to evolve and change over the course of the series.

‘Stranger Things deserves all the praise it’s getting. With an amazing cast of young newcomers, an emotionally engaging mystery story, and a heavy dose of Eighties nostalgia, this is a series destined to be a TV classic. Just be prepared to continually want your childhood back and bemoan the state of today’s technology-obsessed teens.’