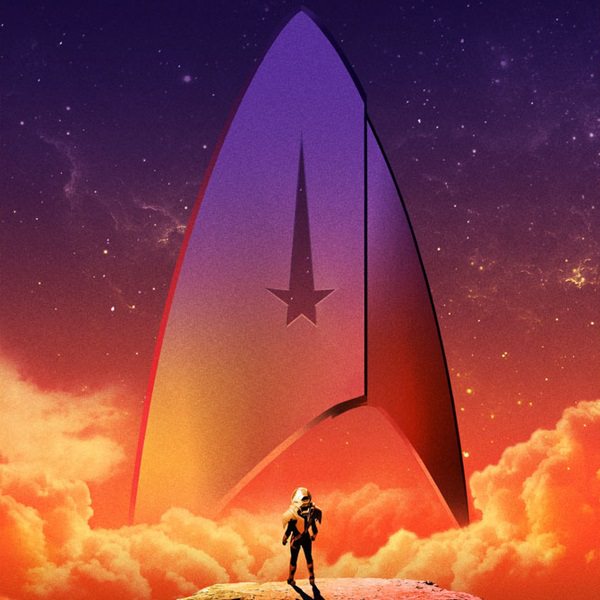 ‘Michael Burnham joins the crew of the USS Discovery as it sets out to discover new worlds and civilisations.’

Although the movie franchise has been ticking along nicely, Star Trek hasn’t been in TV format since Enterprise ended way back in 2005. After various attempts to restart a series, we’re only now getting a brand new show entitled Star Trek: Discovery. Created by Alex Kurtzman and Bryan Fuller, who are no strangers to this well-established universe, all of the first season can be streamed on Netflix UK. Similar to its predecessor, this is also a prequel and is set in the prime timeline. It takes place ten years before the original series, and follows a completely new crew and star ship

The story’s main focus is on Sonequa Martin-Green’s Michael Burnham, a human who was raised Vulcan by Spock’s very own father Sarek (James Frain). At the start of the series, she’s a First Officer on board the USS Shenzhou. She is well respected and has a close relationship with her captain, Philippa Georgiou (Michelle Yeoh). But through a series of events involving the long unseen Klingon empire, she eventually finds herself on-board USS Discovery. Now, alongside Captain Lorca (Jason Isaacs) and the rest of the crew, she must help fight a war she had a hand in starting.

Clearly, after the first few episodes, this is a very different kind of Star Trek than most fans are used to. For the casual viewer, Discovery is an entertaining piece of contemporary television. On the other hand, if you enjoyed the previous spin-offs like The Next Generation (1987-1994) and Voyager (1995-2001), you might feel let down. Those shows went for a lighter and optimistic mood. They were also very episodic, where you could dip in and out with mostly stand-alone stories and not worry about watching every single episode. Discovery, instead, is heavily serialised and has an in-depth plot with complex character arcs, requiring you to see every hour of this show from beginning to end.

What also might upset hard-core Trekkers, is that this show is far grittier and darker in tone. Set during war time, there’s an increasing amount of violence and amoral behaviour from the characters. Certain individuals act out with dubious motives, and bend the rules in ways that would seem unimaginable to old-school captains like Picard and Janeway. The biggest argument against this latest iteration of Star Trek, is that it sacrifices the spirit of those earlier shows for something that will have a wider appeal. Even the aesthetics are darker, and gone are the bright hallways and interiors of those previous ships.

Other major issues are to do with continuity. Problems like advanced technology that didn’t even exist in Kirk’s day. Or the fact that Burnham has a personal connection to Spock’s family and is never mentioned. These are concerns that might very well be addressed later, but for now, they do add some incoherence to the overall mythology.

Despite these problems, if you are able to get past your hang-ups of what Star Trek should look like, Discovery is still an engaging space opera with plenty to admire. One of its strengths, for example, is the fact that it is a single story told over the course of a season. We get to follow characters on personal journeys, where they change and grow, which helps us get invested in them.

Seeing the Klingon empire in their early fractured days is equally fascinating. The way they view this United Federation of Planets as a threat to their very culture and way of life is an interesting concept. Indeed, a people not wanting to compromise on their distinctiveness is a timely theme, and the creators handle it aptly. What’s more, all this allows for some well-choreographed action scenes. Hand-to-hand combat, shoot-outs, and aerial dog fights are all executed with great style and vigour. In fact, this is probably the most action-packed Star Trek television series to-date and has more in common with the new rebooted movie franchise than those earlier shows.

To aid in all this involved storytelling and stylistic action, are some well-written and believable characters. Moving over from The Walking Dead (2010-present), Martin-Green does a superb job as the intelligent Burnham. Human but raised Vulcan, she portrays those two contradicting personalities beautifully. Playing it buttoned down as the purely logical and emotionless Vulcan, she’s skilfully able to let those human moments shine through.

Obviously this is Burnham’s story, and Martin-Green does such a solid job of carrying the series, but she is supported by other brilliant characters. They all have their own personal journeys and each bring something different to the table. For instance, Lorca is a different kind of captain for Star Trek. He’s a commander forged in battle, and as such, brings a moral flexibility to some of the decisions he makes. Isaacs plays him just right, where we constantly see this duplicitous nature which makes him hard to read at times. Of course Doug Jones is caked in prosthetics to play alien First Officer Saru and as always, does an excellent job in bringing this other-worldly character to life. There are plenty of other noteworthy roles and performances, like Anthony Rapp’s engineer officer and Shazad Latif’s head of security.

‘That’s the beauty of the television format, you have the time to develop a number of interesting characters, which is certainly what Kurtzman and Fuller have taken advantage of. Continuity issues aside, Star Trek: Discovery is still a fun and entertaining addition to this beloved franchise. Though it may put off some hard-core fans, with a more modern and popular approach, it may create new ones as well. With a detailed narrative, compelling characters and exciting action sequences, this is Star Trek going in a bold and new direction.’

← The Challenges of Filming a Micro-Budget Post-Apocalyptic Web Series: Mad World The OA review - a weird and wonderful series →