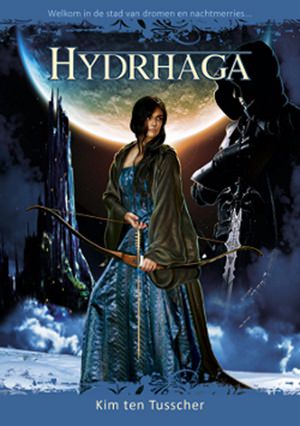 ‘The tale of Lilith and how her unique power becomes the centre of a bloody war. A fantasy novel by renown Dutch writer Kim ten Tusscher.’

Centuries ago, the city was still called Arminath. No sign of the war between elves and men yet marred the city. It was a peaceful time, in which the elves had the chance to develop their talents.

Inside a ring of tall, living birch, structures towered above the surrounding treetops. While the elves were unable to fully disguise these buildings as natural formations, their great artistic flair and love of nature was still evident up on them. Finely-wrought latticeworks served as the walls, ushering the outside world into the interior of the buildings. Such was the skill of the craftsmen that these lattices seemed less like handmade artifice and more akin to flowering tendrils and vines that draped the buildings. The roofs of the houses were shaped like flower buds and were made from a yellow material that shone in the sun. Because of the organic nature of the architecture, not one building in Arminath was alike. Flowering shrubs and bushes sweetened the air with scented perfumes, and at the intersection of every street there were bubbling fountains. The city was split in half by the river, which flowed through its heart and irrigated its soil.

This was my town. My whole like has been dedicated to the elves, with my wealth allowing the realization of my vision for Arminath, much to the satisfaction of its inhabitants. During this time they accumulated ever more wealth and knowledge. Due to my own reforms, science was ever lifted to a higher level. I introduced the guilds and each masterpiece they manufactured was proof of our artisans’ masterful talents. During that peaceful time we mostly made luxury goods,

BACK OF THE BOOK

Kim ten Tusscher achieved national renown in the Netherlands for her Lilith trilogy, about a young woman whose unique power comes to be the very center of a gruesome war. Hydrhaga (2008) is her debut novel. The key differentiator of Kim’s books is their ‘grey-scale’ characters; no plan ‘good’ or ‘bad’. It is left to the reader to assess the various personalities. This adds an element of depth and emotion to the already thrilling, quickly paced story.

The young and rebellious Lumea tries to escape the restrictions imposed on her by her homeland by accepting an invitation to visit the legendary city of Hydrhaga. The rigid Elf Elion and his young friend Siard aspire to liberate their race from the slavery to which mankind condemned them, due to sins committed in the past. The quests of these three youngsters intertwine and together they set out to search the mysterious city of Hydrhaga, where dreams become reality.

However – Hydrhaga doesn’t turn out to be the paradise that was promised to them. It is a tool, the dream of a spirit who aims to accomplish his – in itself noble – goal at the expense of thousands of lives. As they flee from certain death, Lumea and her two companions find themselves compelled to adopt a position in the conflict that is about to erupt.

Hydrhaga is a story about conflicting points of view, friendship and the price of hatred. It is also the story of Lumea who is faced with many moral dilemmas. Her choices enable her to ultimately find her place in the world. But at what price?

With this imaginative, skilful debut ten Tusscher positions herself as one of the top fantasy authors … – Fantastiek about Kim’s Lilith-trilogy

Wonderful story that never bores, colorfully depicted with a lot of depth – Spentakel about Kim’s Lilith-trilogy