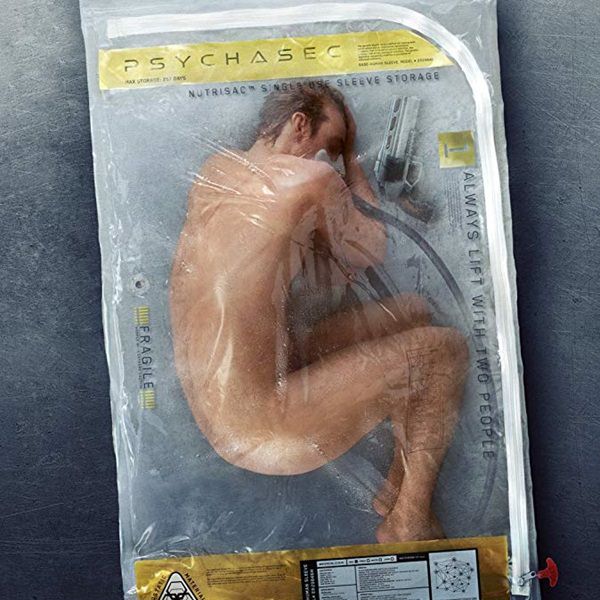 ‘Criminal Takeshi Kovacks is awoken after 250 years by a wealthy businessman who wants him to solve his own murder.’

Based on the sci-fi novel by Richard K. Morgan, Altered Carbon is one of Netflix’s most ambitious original series yet. Created by Laeta Kalogridis, it’s a mishmash of several genres that will likely be compared to Blade Runner (1982), in which it does share a similar aesthetic. That’s not to the show’s detriment however. It touches on slightly different themes and presents a future world built around another kind of life-changing technology.

Set in the far future, we’re immersed in a world where the human mind can now be digitised. At a certain age, people are implanted with a small disc in the back of their neck called a stack. Bodies are now called sleeves and if destroyed the stack containing that individual’s consciousness can be put in a new one. With the potential to live forever, the wealthy soon take advantage of this technology and hold the monopoly on it.

The bulk of the story takes place two hundred and fifty years after a failed uprising by a group of people called the envoys. Believing humans were never meant to live forever they attempted to destroy the technology, led by Quellcrist Falconer (Reneé Elise Goldsberry). Told he is the only survivor, Takeshi Kovacs is awakened and put in a new body (Joel Kinnaman) centuries later. He finds out that one of the richest men, Laurens Bancroft (James Purefoy), wants to hire him to solve his own murder. Dying before his consciousness was uploaded and saved to a satellite, all the evidence points to suicide. Kovacs takes the case in the hopes of earning his freedom.

Although there’s a lot going on in Altered Carbon and the plot is quite convoluted. The show takes an epic approach to storytelling. With such an in-depth narrative and dense mythology to unpack, the episodic format of television is the perfect place for this series. There’s just too much for this to work as a movie and with more hours at her disposal, Kalogridis can fit more of the source material in. She’s able to do this organically and takes her time in revealing the rules of this world. The further viewers progress through these ten episodes, the more they learn about how things work, like the social structure or certain character motivations. So even if there is a lot of exposition, it doesn’t feel too heavy-handed but is evenly spread out.

Having said that, there is a lot of terminology dropped into conversations that don’t always make sense. You might find yourself having to go back a few times to find out what the characters are talking about. This is definitely one of the shows main weaknesses. It does feel at times like it would have been helpful to have read the book.

Kalogridis does make up for these small flaws by adding a lot of visual detail to the sets and bringing a good deal of physicality to the environments. Despite that many will say the landscape mixed with the detective aspect is a carbon copy of Blade Runner. There’s enough distinctiveness to help it stand out on its own. Besides, this is largely action orientated when compared to Ridley Scott’s more thought-provoking classic. What’s more, it’s all brought together via some solid special effects. Regardless of some dodgy CGI, it holds up, blending believably with the practical effects.

When it comes to the action, Altered Carbon is full of a variety of different and well-executed sequences. Whether it’s shoot-outs with futuristic weaponry or martial-arts combat, they’re all filmed and choreographed effectively. In a world where it’s hard to be properly killed, Kalogridis goes bloody and violent, adding a brutal quality to the action.

Aiding in all this world-building and complex plotting are the well fleshed-out characters. They’re brought to life by a great ensemble of actors. Kinnaman is suitably cast as the ex-mercenary turned private detective. He brings a cynical mentality that most of the great movie P.I.’s have, and a world-weary demeanour that is very fitting to the character. Being someone who’s lost a lot, he’s equally able to display just the right amount vulnerability to help make him relatable. And on top of that, he looks credible in the action department, really looking like he can take out a whole gang of thugs with ease.

Alongside Kinnaman is Martha Higareda as police lieutenant Ortega, who has a vested interest in the sleeve Kovacs is wearing. As a reluctant ally these two make a good double act. She also plays an important part in breaking down Kovacs’ defences and drawing out his compassion and humanity. Purefoy’s Bancroft is likewise an interesting character. Representing the portion of the populace who are so wealthy they can live forever, he comes with a cavalier attitude and a superiority complex. Hard to read, he’s not an outright villain and has a twisted kind of morality. But neither is he likeable, being exactly the kind of person Kovacs was trying to prevent from existing in the rebellion.

‘Altered Carbon is perfectly suited as a Netflix original, and is very easy to binge watch. The money invested in this series gives it a great cinematic vibe. With each episode seamlessly leading into the other, it’s like watching a giant movie more than a TV show. Combined with great action scenes and solid characterisation, even with the few flaws it does have, this is a sci-fi show well worth your time.’