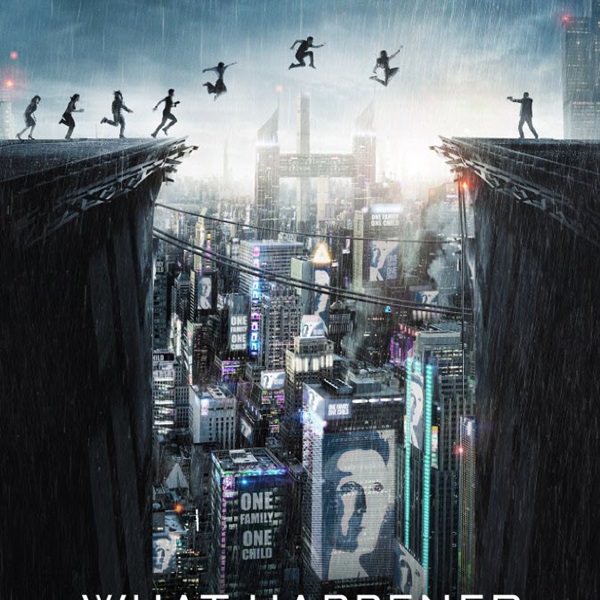 ‘In an over populated world, a set of identical septuplets must avoid being caught by the government while investigating the disappearance of one of their own.’

Not since sci-fi seriesOrphan Black (2013-2017) has an actor had the chance to play multiple people at once and have them all interact with each other. Indeed, it must seem like a great opportunity for an actor, to have the chance to showcase their range and be able to display more than one distinct character in one movie. This can’t be an easy task to pull off though, not just on a performance level but also a technical one. Noomi Rapace is now the latest to joins the ranks of those who have ever performed more than one part in a film or TV series, as she plays a group of septuplets who are born into a world where it’s illegal to have more than one child.

Directed by Tommy Wirkola, What Happened to Monday (2017) gets its worldwide release on Netflix, and is set in a scary future not too far removed from what could actually happen. In the first opening minutes the scene is set and we’re shown a montage of how this future will look. We’re told the world is dangerously overpopulated, and as a result, political activist Nicolette Cayman (Glen Close) founds the C.A.B (child allocation bureau), an organisation that enforces a one child per family policy.

It’s now 2073, and anyone who is discovered with multiple children will have them processed and frozen in cryogenic stasis. The story picks up when a mother dies giving birth to female septuplets (Noomi Rapace). Instead of turning them in, their grandfather (Willem Dafoe) raises them in secret and names them after the seven days of the week, where only one will be able to go out on the day that matches their name, and together, assume one single identity. When Monday doesn’t return home though, the sisters must mix up their strict routine and use all their various skills to save her.

Stripped down to its essence, What Happened to Monday is hardly a unique set up. A dystopian future with a totalitarian government is something we’ve seen play out in a variety of films, like V For Vendetta (2005), Battle Royale (2000) and Logan’s Run (1976). Even Soylent Green (1973) similarly dealt with a overpopulated and starving planet, and a protagonist set on unearthing a dark secret and tearing down the evil regime.

Whatever the reason, there certainly seems to be a disturbing fascination that film makers have with bleak yet eerily plausible futures. Although Wirkola has an uphill battle then to get his film to standout in a vast ocean of dystopian sci-fi movies, he mostly succeeds. On the whole, he achieves this by having a strong emotional core, an in-depth and interesting conspiracy plot, and an excellent performance from Rapace.

As proved with crazy Nazi zombie movie Dead Snow (2009), Wirkola is also competent when it comes to directing exciting and bloody action sequences. He knows how to rank up the tension and get the audience really invested. With a great score at his disposal, and by skilfully editing these set pieces together, he makes sure they’re all coherent and make sense, especially when dealing with one actor playing numerous characters in one scene.

Rapace excels as the seven sisters with their various and distinct personality traits. Being able to make the viewer believe their watching several different individuals interacting is no small feat, yet she makes it look effortless. She easily brings that emotional element and really gets us to feel for this unconventional family even though they’re all made up of one actor. Credit also has to go to the visual effects and editing that makes all this happen, in which none of it would be possible.

Even though Rapace clearly holds this film together, she is supported by a couple of good performances from Close and Dafoe. Cayman is one of those layered antagonists you could almost side with, as Close brings a lot of conviction to her character, which only adds more gravitas to the role. Dafoe, even with the lack of backstory, also manages to bring a bit more depth to his character than the limited screen time allows him.

If there’s one thing that hinders the film, it’s the bland futuristic world Wirkola has created. Visually speaking, there’s nothing interesting or striking about the environment, and a lot of these elements feel like they’re borrowed from various other sci-fi movies and just thrown together. Whether it’s transparent touch-screen computers, high-tech weapons that are fingerprint sensitive, or some kind of invasive identity bracelet, it’s something we’ve all seen before in some shape or form.

‘What Happened to Monday is a solid entry in the science fiction genre. It may not be breaking any new ground in the dystopian future film, but that doesn’t mean it isn’t good for what it is. With an overwhelmingly awesome performance from Rapace, some brilliant visual effects and enjoyable action scenes, there’s enough here to overlook the flaws and appreciate this for the entertaining sci-fi it is.’