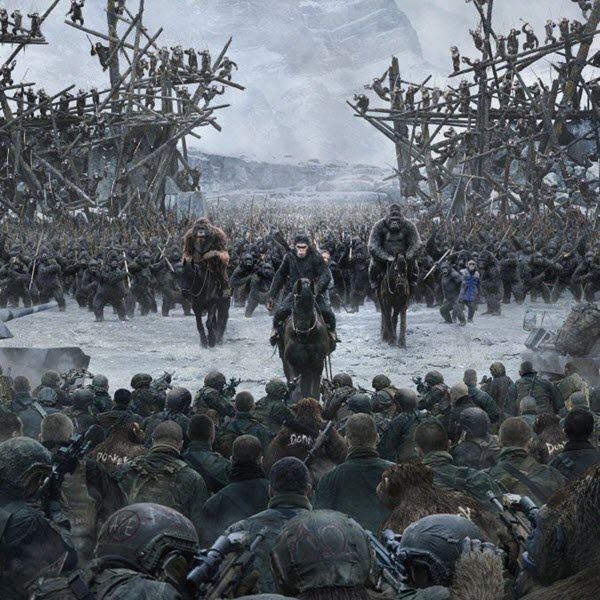 ‘Caesar must battle a ruthless human Colonel as well as his own darker instincts.’

When it comes to movie franchises, the general rule is the quality dips after each instalment, as each film tries to outdo the one that came before, and where money is usually the priority, not the film itself. The recently rebooted Planet of the Apes series, which kicked off back in 2011, is that rare breed of franchise that as actually gotten better with each passing film.

By focusing on story and character development, and in particular the apes, there’s always something new and different to appreciate in each movie, instead of rehashing the same formula but just making it louder and bigger.

Directed again by Matt Reeves, War for the Planet of the Apes continues that trend by offering a second sequel that not only expands the story of ape verses man, but also explores the consequences of war, and how it changes lead ape Caesar (Andy Serkis).

After quickly updating us through a short text, the story picks up a few years after Dawn of the Planet of the Apes (2014), where full-out war has broken out between man and ape. Not wanting anymore apes to die, Caesar tries to lead his kind to a new peaceful haven. However, when tragedy strikes, he goes on a personal journey of revenge against the human’s leader, known only as the Colonel (Woody Harrelson).

This is another great instalment in this rebooted franchise. We’re given a great story that not only builds on the previous films but can also stand alone. Reeves does this by going deeper than your average summer blockbuster, and not just succumbing to the pressure of doing a typical sequel. He explores multiple themes, making this a richer movie-going experience. Like most good war films, it’s not just about the action but what war does to the individuals fighting, and how that strain can manifest in different ways.

Indeed, this is explored magnificently through Caesar, as he fights his own inner demons while also trying to hold on to his compassion and mercy. In fact Reeves keeps the focus purely on the apes, giving them most of the time and character development, and as a result, are ironically made the most humane and sympathetic.

With the mixture of acting and CGI, the apes are flawlessly brought to life, and with each passing film the technology has only gotten better and better. There are moments where the camera gets right up into the apes faces, and you would swear you’re looking at a real-life animal. Their interaction with the physical environment is seamlessly done, like the way rain drips off their faces or when they interact with the human cast. Really, the best compliment you could give is that you don’t even notice them as visual effects. That your eyes just accept what you’re seeing.

When it comes to the action, this is paramount, as a poorly done CGI battle can take you right out of the movie, as so many superhero films have proved recently. Thankfully, that isn’t the case for War for the Planet of the Apes, with Reeves directing some brutal and tense set pieces that bring you right into the action. Where even the CG characters feel just as tangible and physical as the sets and human actors. These sequences are made even more engaging by the fact we’re watching fully fleshed out characters who we’re emotionally invested in.

This is in no small part down to the brilliant performances on display, especially the motion captured ones. Serkis is once again phenomenal as Caesar. Through three films now we’ve seen him grow from a young and gifted leader, into this seasoned and grizzled warrior. Giving a very physical performance, he uses every part of his body to convey a range of emotions. It’s in his eyes and facial expressions though where you really see into this character’s soul, and combined with the visual effects, you absolutely feel the weight he carries as leader, and the toil this war is having on him.

Karin Konoval also returns as Maurice the orangutan, and once again brings a lot of heart to this gentle beast who acts as Caesar’s conscience. New addition “Bad Ape”, played by Steve Zahn, also brings some much needed and well placed levity, while never undermining that overall introspective tone.

As with the previous film, the humans aren’t as fleshed out, but there are a couple of standouts that hold their own alongside the apes. Harrelson gives a really intense performance as the dangerously unhinged colonel. What’s more, he’s given a backstory and motivation that you could almost understand, making him a far more interesting antagonist. Amiah Miller as a mute little girl the apes come across also gives a moving performance. She’s able to show a lot without uttering a word, and she has a great report with Maurice.

‘War for the Planet of the Apes is another roaring success for this franchise. Thanks to its in-depth story, Serkis’ performance, and some immaculate visual effects, Reeves has made a film that will not only entertain, but also emotionally engage us, as we root for a species that’s not our own. Also, if they don’t make any more films, Reeves wraps Caesar’s story up perfectly, making this an end to a near perfect trilogy.’