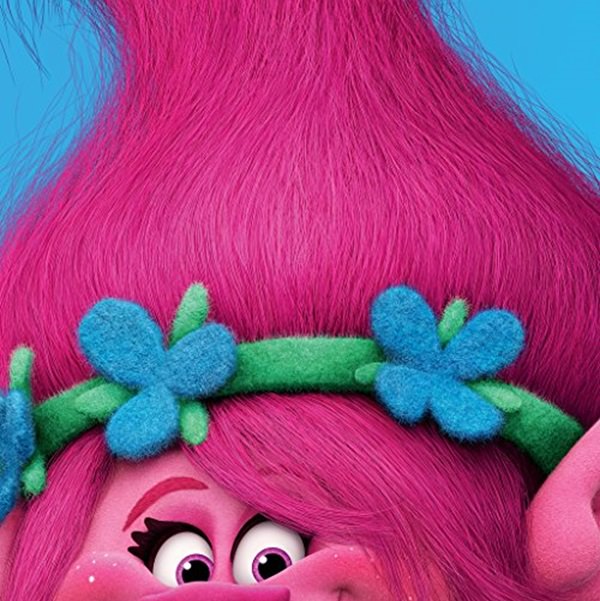 ‘Troll Village is invaded and it’s up to Poppy and Branch to rescue their friends from the Bergens.’

You have to hand it to Dreamworks. They clearly know how to make animated films that will cater for your children, and Trolls is no exception. With its bright colours, catchy songs and fast pace, it will easily keep young eyes glued to the screen. Although not ground-breaking or pushing storytelling boundaries like many of the Pixar films, Trolls is certainly an enjoyable film for you to kill an hour and a half with your kids.

The plot is simple enough and is set in a colourful and furry world where a tribe of singing and dancing Trolls are ritualistically eaten for their happiness by a group of miserable creatures known as the Bergens. After escaping Bergen Town and living in peace for twenty years, they are eventually rediscovered by these hideous monsters, and when a group of her friends are taken, overly optimistic Princess Poppy (Anna Kendrick) must team up with the only grouchy and pessimistic Troll, Branch (Justin Timberlake) to save her people.

It’s not a complicated story by any stretch of the imagination, but neither is it meant to be. This is purely for kids only, with a message that doesn’t get as deep as true happiness can be found inside ourselves, and its ok to sing and dance once in a while. It’s essentially a buddy film and sticks to that well known formula of a miss matched pair coming together for a common goal, who along the way learn from each other and end up becoming best buds.

Although hardly original, what it does have going for it is a musical format with the cast singing some catchy cover songs that will definitely have you tapping your feet through most of the film. This is also helped by a well selected voice cast, particularly Kendrick and Timberlake as Poppy and Branch who both have the singing talent required and actually harmonise quite well together.

Gag wise, there’s plenty for the kids with a lot of visual and physical comedy, but the more mature might be a bit starved for laughs and hankering for the more layered comedy of Shrek (2001), or adult storytelling of How To Train Your Dragon (2010), which are great examples of what Dreamworks’ are capable of when they put an effort in to what their producing. A lot of the comedy also comes from Branch as the odd one out, as he has to endure the constant singing, dancing and regularly scheduled hugs from the rest of the Trolls.

It’s all very juvenile but at the end of the day, it is a film aimed for children. Additionally, as expected with a Dreamworks animation, the story moves at a brisk pace and has plenty of action to keep the little one occupied, and combined with the musical numbers, these set pieces are all very entertaining and fun.

‘Ultimately, the world the directors Mike Mitchell and Walt Dohrn have created is visually loud and intriguing, and has just enough going for it to keep it enjoyable.’

With some zippy dialogue and an infectious soundtrack, it will definitely be a favourite among the children. Sadly where it fails, is with an unoriginal formula and little to no effort put in to making it appealing for the grownups. Trolls is a perfectly designed film for parents to keep their kids quiet for a couple of hours.

← Ouija: Origin of Evil review - atmospheric and retro horror at its best Doctor Strange review - a great introduction to the psychedelic side of Marvel →