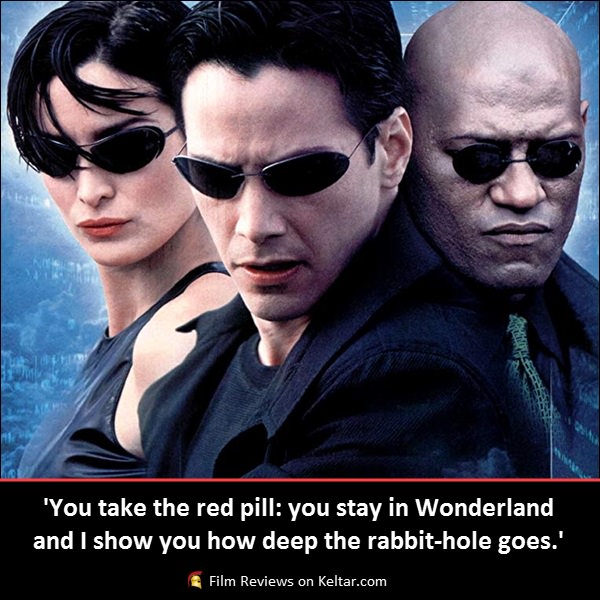 ‘Computer programmer Thomas Anderson (aka Neo) is contacted by legendary hacker Morpheus who informs him about the true nature of his reality.’

1999 was an amazing year for film. To name just a few, you had Fight Club, The Sixth Sense, American Beauty, and The Blair Witch Project (which kick-started the found-footage format). Although not great, you even had the first and highly anticipated Star Wars prequel, The Phantom Menace. Yet the most important movie of that year, is arguably The Matrix, which is celebrating its twentieth anniversary.

Written and directed by the then unknown Wachowski siblings, this was a radical new film within the sci-fi and action genre. It may of spawned two lacklustre sequels, but no one can take away the significance the first had on Hollywood coming into the twenty-first century.

The action movie especially evolved going forward. There’s clearly a stark difference in style between those made pre-The Matrix and those post. Heavily influenced by Japanese animation and borrowing techniques from Asian martial arts movies, you can see how it changed the way western film makers approached the genre.

‘Also worth mentioning is the savvy marketing, which kept everyone guessing what this strange original film was all about.’

During the lead-up to its release you couldn’t go anywhere without some sort of reminder of a Star Wars triumphant return. But it was all the posters, TV spots and trailers asking us a question [what is the Matrix?] that had everyone intrigued. When people finally saw it to have their curiosity satisfied, minds were blown. So revolutionary was it at the time, The Matrix exploded through positive word-of-mouth and opened up Asian cinema to a wider audience.

The story itself is a staple of the science fiction movie. Man versus machine is a narrative framework that’s very common to sci-fi. But it’s the Wachowski’s execution of that general blueprint that really lets The Matrix stand out. After an amazing opening scene involving Carrie-Anne Moss’s Trinity, we’re introduced to our main protagonist Neo (Keanu Reeves).

‘Dissatisfied with life, he seeks out a man named Morpheus (Laurence Fishburne), who may hold the answers he’s searching for.’

What he discovers, is that the Matrix is the very world he lives in. A virtual reality to keep humanity docile by artificial intelligence. Neo soon joins the fight to set humanity free, and faces off against the machines in the form of the dangerous Agent Smith (Hugo Weaving).

Two decades on and The Matrix still holds up, being easily the Wachowski’s best movie. Creating a fascinating story, the idea of being trapped in a virtual world had everyone questioning their own reality. Approaching the plot in a unique way, they likewise didn’t just do a standard action flick. They brought an element of cultural and religious philosophy to the script, getting audiences to actually engage on an intellectual level. Religious themes like Buddhism, Christianity and Judaism are explored. Even Neo is a blatant messianic figure. Not only that, concepts of truth and free will can also be gleaned from the story. This is clearly a thinking man’s action film.

‘As mentioned, when it does come to the action, this was ground-breaking stuff.’

Loaded with style, these were set pieces most westerners had never seen before. One of the coolest things the movie does, is incorporate the idea of bending or breaking the rules of the Matrix. By hacking and cheating the system, the laws of physics no longer had to be adhered to.

Within this computer simulation, certain individuals had the ability to perform superhuman feats like jumping tall buildings and moving at incredible speeds. Characters could become Kung Fu masters and expert marksman by simply having the skills uploaded into their brain. On top of that, with a punky and heavy metal soundtrack edited into the sequences, it all aided in making them as engrossing as possible.

Executing all this action was achieved by a mixture of practical stunts and visual effects, both which were perfectly utilised. Martial arts choreographer Yuen Woo-Ping was brought in to stage the hand-to-hand scenes. Using a method known as Wire-Fu, he had actors and stuntmen attached to wires to augment their fighting capabilities. Once the cables were digitally removed, it gives the impression of jumping great heights, running up walls or even hitting opponents across the room.

At the time, it was common among Hong Kong action movies but rarely seen in the American industry. Subsequently, due to the popularity of The Matrix, it’s a style which has now been adopted by Hollywood, and continues to be used to this day.

‘Visually, the Wachowski’s made sure all these sequences were framed and shot really well.’

Not just with great looking cinematography, but by using an innovative special effect called bullet time. With a combination of green screen, a special rig of cameras and some CGI trickery, they are able to slow down the action while keeping the camera moving at normal speed. Providing some incredibly slick-looking scenes no one had ever seen before, a string of movies coping and parodying the technique rapidly appeared over the following years.

Bringing this story to life were a main cast who all showed themselves to be extremely committed. Wanting them to do the majority of their own stunts, the directors put them through extensive training months before principle photography even began. This dedication pays off in dividends, bringing a degree of authenticity in which few movies had previously accomplished.

‘Reeves is a particular standout, and is wonderfully suited to the role of Neo.’

Understated as an actor, he suitably slots into the world of The Matrix, never stealing the scenes from his co-stars or overshadowing the story. He wasn’t even the studio’s first choice for the part. It would’ve looked and felt completely different if they had got their way with preferred actors like Nicholas Cage or Will Smith.

Fishburne makes an excellent zen-like mentor to Neo. And Moss, who clearly made her name with this film, gets to show-off her action chops alongside the men. Getting the most memorable role however, has to be Weaving’s Agent Smith. Policing the humans in the Matrix, he has a real disdain for mankind. His speech pattern is appropriately robotic, while giving away a hint of that hatred. What’s more, he has the most quotable dialogue, with his character being one of cinema’s top movie villains.

‘There’s no denying the impact The Matrix has had on Western cinema.’

After twenty years we can still see the ripple effect it’s having. Movies like the John Wick franchise and a lot of the modern superhero films are clearly influenced by this classic in the making. If you’ve never witnessed this essential addition to the sci-fi action genre, now is a good time to have your reality questioned. Just remember: “There is no spoon”.

← Spider-Man: Far From Home review - another excellent and heartfelt movie The Lion King review - a pointless and soulless remake →