The Lion King review – a pointless and soulless remake 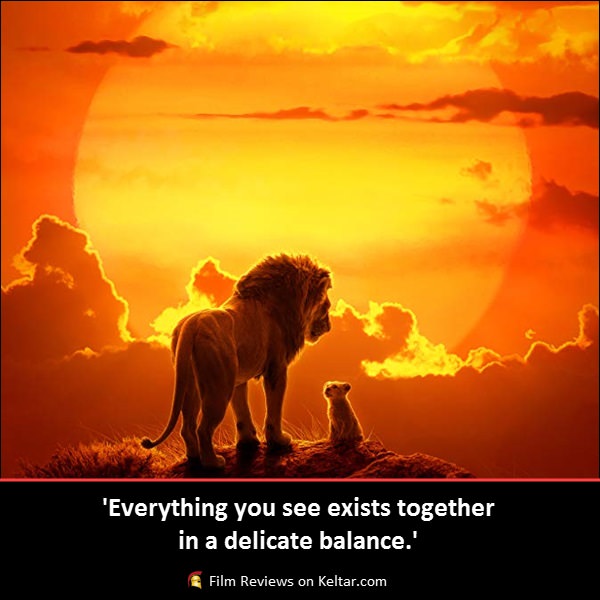 ‘A young lion prince is cast out of his pride when his father is murder. While he is in exile he makes plans to return and claim his throne.’

Arguably the pinnacle of the Disney renaissance period, 1994’s The Lion King is an animated masterpiece. With its Shakespearean story set to Oscar winning music by Tim Rice and Elton John, this was a film everyone loved. Now, twenty-five years later we’re getting the inevitable remake using photo-realistic animation and an ensemble of A-list voices. Timed perfectly, there’s a whole generation of parents who are going to want to introduce their kids to a piece of their own childhood.

‘Anyone of a certain age will know this story, and if you grew up with the original, I can’t imagine you thinking this is any better.’

From the very get go, it’s clear this is a soulless and almost shot-for-shot remake. I don’t think it’s cynical to say the previous Disney remakes have been motivated more by money than creativity. But The Lion King 2019 is definitely the laziest one to date. Knowing this was one of their most popular films to redo, it feels like the studio just decided to coast through the production and get it to theatres as soon-as-possible.

If you look at the new versions of Beauty and the Beast (2017) and Aladdin (2019), at least they attempted to expand or alter the story in a different way. By updating characters and bringing in new plot elements, they just about justified their existence. Returning from 2016’s The Jungle Book, director Jon Favreau makes no attempt to do any of this. Instead, he lazily copy’s all the original’s iconic moments and scenes beat for beat. Even the famous songs are all the same but just with different voices, which can also be quite jarring and off-putting.

‘When it does come to the film’s one strength, that also ends up being its greatest weakness.’

Visually, you can’t fault what the effects team have accomplished. From the animal designs down to the majestic landscapes and settings, this truly is a flawlessly looking world. This technically can’t be labelled live-action, but it’s certainly not far off with everything being so meticulously designed. clearly a lot of money has been poured into this movie, and no one can deny its technical achievement.

It’s that element however, that seriously drags the film down. The animals are so photo-realistic that they barely emote. Looking at the animated original, the characters were anthropomorphic in their facial design, meaning we could empathise with them. Simba witnessing his father’s death with terror and despair. Scar’s maniacal glee as he enacts his schemes. We can see all their emotion and personality on the faces of these very relatable characters.

‘With the new designs, they’re just too life-like, making it hard to find any kind of emotional connection with.’

So when Simba’s trying to wake-up a lifeless Mufasa, you can’t see the grief or tears you saw in the original, which makes it less impactful.

As a result, a great deal rests on the voice cast to get that emotion across. Unfortunately, despite their best efforts, a lot of them struggle to translate their performance into the digital characters. Jones’ deep booming voice as Mufasa is the only returning actor from the first movie. His distinctive vocals are irreplaceable as the powerful lion, but even he finds it hard to bring the gravitas he had twenty-five years ago.

Ejiofor is a great actor yet only manages to bring half the personality Jeremy Irons did as Scar. And Glover suitably slots in where Matthew Broderick once was but adds nothing new. Billy Eichner and Seth Rogen likewise feel misplaced as comedy sidekicks Timon and Pumbaa.

‘2019’s The Lion King doesn’t hold a candle to the animated original, with everything about it being inferior.’

Most of the Disney remakes have been about the numbers, but this new movie couldn’t be more of a cash-grab if it tried. Apart from the technical side (which comes with its own set of problems), there is absolutely no reason for this film to exist. Any parent thinking about taking their child to see this pointless film will only be wasting their hard earned money. There’s already a perfect version of The Lion King and it came out decades ago.