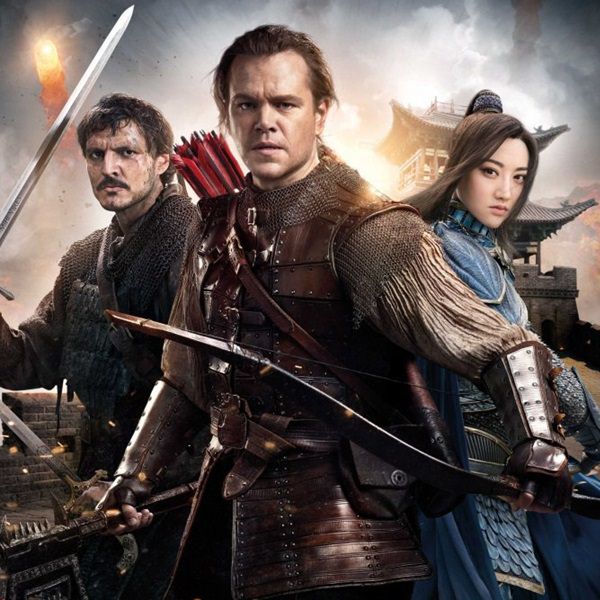 ‘The Great Wall of China is attacked by a horde of marauding creatures.’

History is re-tweaked in this historical fantasy film about fighting monsters, and The Great Wall of China being specifically built to keep them out. Unfortunately, except for an interesting concept, Zhang Yimou, the man who directed and brought us such visually stunning films like Hero (2002) and House of Flying Daggers (2004), feels like he’s sold out in this latest movie of his, which in the end, is a very lacklustre and uninspiring experience.

A sort of semi-American debut, the story is set in Ancient China and centres around a duo of European mercenaries, William (Matt Damon) and Pero (Pedro Pascal), who have come looking for explosive black powder. They eventually come across The Great Wall of China, maned by a secret military known as the Nameless Order, and are soon tangled up in a war against an otherworldly force that could threaten the whole earth if it were to breach the wall.

While watching The Great Wall, you can’t help but wonder if Yimou felt pressured by the Hollywood system to bring something a bit more conventional and palatable for Western audiences. Gone is the arthouse aesthetic, and the beautiful and graceful cinematography of his previous Wuxia films.

Instead, what we have is a typical action adventure film with a bloated CGI army, and Hollywood actors who feel like they’re purely in the movie so we don’t have to have subtitles throughout the whole runtime, because God forbid that we should have to read during our film viewing.

What also doesn’t help is its poorly written script, which has some very wooden dialogue, thinly sketched characters, and a basic plot with no real depth to it, or excitement. In fact, you’ll struggle to find anything to engage with, making it a rather boring experience, as it comes off as a cheap imitation of the Helms Deep battle from Lord of the Rings: The Two Towers, which follows the same formula of a human army having to defend its stronghold against a monstrous horde.

The difference in this siege battle though, is it consists of almost the entirety of the film, and hardly any time is spent building up to it, or used to develop main characters we can get invested in, and care for. Plus, the mythology is glossed over and all we’ll told is a simple backstory about the creatures; where they come from, and the over familiar global threat they pose.

Yimou also struggles to balance a consistent tone, where he can’t seem to make his mind up if he wants to play it straight and humourless, or have a tongue-in-cheek attitude towards the story. In fact, there are long stretches where every character has this intense and overly serious look on their faces, broken sporadically by someone, usually Damon or Pascal, cracking a joke to lighten the mood. It’s misplaced, and actually, Yimou would probably have been better off committing to one tone or the other (although, how can you ever take a film about giant lizard monsters attacking The Great Wall of China seriously).

As mentioned, the film’s also let down by poor characterisation, where everyone fills an archetypal role, and feels like they’re there to merely service the thinly drawn plot and action. Damon is a good actor (despite the dodgy accent I can’t quite place) but struggles to bring more to William than that mercenary stereotype we’ve seen countless times before, a soldier who’s grown disillusioned and hardened by military life only to rediscover his honour in a war he feels is worth fighting for.

Pascal is also thinly sketched out, who feels more like a plot device than an actual person, and William Dafoe is just wasted. Among the Asian cast is Jing Tian as Commander Lin, the warrior who plays a part in William’s poorly conceived redemptive ark, showing him things other than money that are worth giving your life to. Andy Lau’s war counsellor is also underused, and really, there’s nothing in any of these characters to draw you in.

In terms of action, apart from a few cool moments, The Great Wall relies too much on CGI effects over practical one’s, and by the third act, falls into a huge and overblown CGI mess. It has none of Yimou’s visual flare from his previous and more smaller works, and overall, looks as if he’s finding it hard making a film with a more westernised plot and a big Hollywood budget.

‘Apart from a few scenes that showed us what Yimou’s really capable of, The Great Wall is sadly a disappointing attempt at adapting his unique filmmaking abilities for a more Western audience.’

With a badly created enemy using nothing but CGI, uninteresting characters, a simple story that fails to grab, it’s a film that at best can be described as mediocre and a bit of disposable fun.