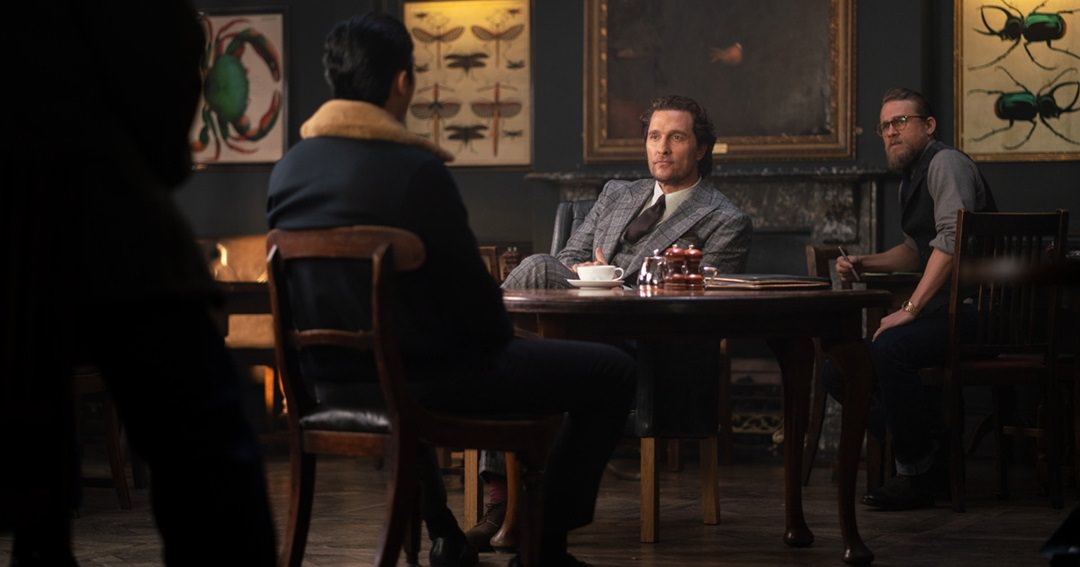 American expat Mickey Pearson wants to retire from his profitable marijuana empire. But when words gets out, he becomes the target of plots, schemes and blackmail.

Not long after his live-action version of Disney’s Aladdin (2019), Guy Ritchie is going back to his roots with The Gentlemen. Similar to his early work, this is a London-based gangster movie involving a large collection of colourful criminals. Starring a who’s who of great British talent (including token American Matthew McConaughey), there’s certainly a lot to like. It’s the kind of film that skyrocketed his career and set in motion a string of copycats in the early 2000’s. The question is, after a number of big Hollywood blockbusters, can he go back and claim the genre he helped make.
Set within the world of London’s drug trade, the story centres around Mickey Pearson (McConaughey) and his marijuana empire. Looking to possibly retire, with the help of his right-hand man Raymond (Charlie Hunnam) he begins looking for a potential seller. However, everyone wants a piece of his business, including fresh-faced gangster Dry Eye (Henry Golding). With double-crosses and black mailers coming out of the woodwork, retiring seems trickier than Mickey anticipated.

*This is an external link and will open in a new tab.

After watching this movie, it’s clear Ritchie’s lost none of his flare when it comes to this type of specifically styled movie. If you liked his first two films, Lock Stock and Two Smoking Barrels (1998) and Snatch (2001), you’ll probably enjoy The Gentlemen. Identical in tone, it has a familiar quality. As the writer, this is also one hundred percent his vision. You definitely get the impression that he’s enjoying having something that is all his. He’s not adapting a legend like King Arthur: Legend of The Sword (2017) or remaking a Disney film. This is something he has complete ownership over, as well as creative control.

‘Consequently, there’s an energy to the way the story is put together and a fast pace that rarely slows down.’

Keeping things exciting, there’s a playfulness which is certainly enjoyable to watch. Ritchie likewise adds an awareness in the storytelling. By having a bulk of the plot unfold as a flashback through two character’s conversation, we can’t always trust what we’re seeing. Coming with that are the usual twists and turns that will keep the audience on their twos.

All the cast slot suitably in their roles. McConaughey is perfectly cast as the charming and cunning Mickey. Fitting right in, he inhabits this world of cockneys and gangsters really well. What’s more, he has a brilliant chemistry with his on-screen wife Rosalind (Michelle Dockery). Dockery herself looks like she’s enjoying playing someone who’s the complete opposite to her Downton Abbey character. No push over, she’s a strong female character who holds her own alongside the male majority.

‘Really, it’s the characters that will be the main selling point of the movie.’

Although not much in terms of characterisation or development, they’re all given various quirks and personality traits that many should find entertaining to watch. Hugh Grant plays a sleazy investigator who fancies himself a gifted screenwriter. Collin Farrell as an erratic gym coach. And Hunnam with his OCD tendencies. These are all a bunch of strange and funny individuals that will be worth sticking around for. On top of that, Ritchie equally proves skilful in combining a lyrical approach to the profanity-ridden dialogue. Something he’s not been able to do in his more recent family friendly movies.

*This external link will open in a new window.

Not without its flaws, the main element that hinders The Gentlemen the most, is the overall story. Over twenty years on from Ritchie’s debut, this type of film is now very familiar. Subsequently, the plot doesn’t feel that fresh or original, and is something we’ve seen countless times by now. The story of an ageing criminal looking and struggling to get out of the game is hardly unique. If it had come out a couple of decades ago, this would have been considered new and different. But now, it just feels like Ritchie rehashing an old formula, wanting a break from the Hollywood machine.

‘That being said, it’s still Ritchie at his most passionate, and it certainly shows.’

Get past the stale narrative, and there’s still a lot of fun to be had. With an enthusiastic cast, plenty of energy and a great visual style, this is a movie you’ll be hard pressed not to enjoy.