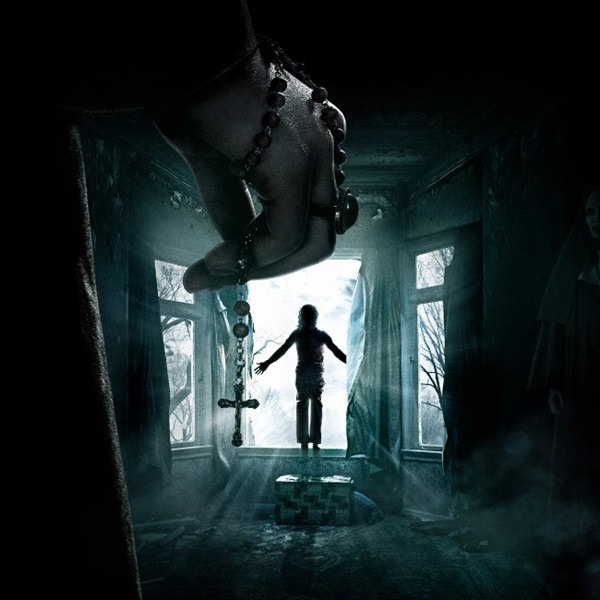 ‘Ed and Lorraine Warren take on the Enfield poltergeist, a malicious spirit that has possessed a young girl.’

James Wan’s The Conjuring (2013) had sympathetic, believable characters and a true story setting going for it. With good old fashioned scares and a great setting it was no surprise that it became a financial and critical success. It was obvious a sequel would be on the table.

This time round paranormal investigators Ed (Patrick Wilson) and Lorraine (Vera Farmiga) Warren travel to the UK to aid a single mother and her young children who are being terrorised by a supernatural presence in their home. It’s a familiar story and at times cliché. Wan however, utilises these haunted house troupes so well now that it doesn’t really matter, when he can so expertly produce real terror out of the audience, which is the main point of a scary movie, is it not.

Obviously, with any true story adaptation there will be exaggerations and certain parts will be embellished to give that extra dramatic effect, but knowing that the story is based on an actual case investigated by the real life Warrens will add an extra chill factor. Wan also includes a side plot involving Ed and Lorraine themselves. This increases the personal stakes for them and adds a bit more depth and complexity to the narrative. It’s all very well handled but it does bump the runtime to just over two hours, which arguably could have done with shaving ten minutes or so off for the sake of pacing.

Wan makes good use of the location as well and has perfectly designed the house to squeeze every last ounce of fear out of us. Whether it’s a child’s home-made tent at the end of the corridor, a flooded basement where anything could happen, or the done-to-death but effective rocking chair that moves on its own routine.

Special mention also needs to go to sound design as every creaky door, dripping tap and unholy sound is masterfully used to unnerve the audience. It could be said that Wan uses every tool at his disposal to make sure we’re as uncomfortable as possible and in a constant state of unease.

Cinematographer, Don Burgess also helps Wan keep that oppressive atmosphere throughout with effective lighting that creates a shadowy environment where anything could be lurking, and disorientating camera angles that will keep you unsettled. It’s not flawless though and Wan does fall in the trap of relying on over used jump scares a few times. The film can also reveal to much at times, which kind of takes the edge off, particularly during the final act when the story descends into more action territory. These sort of films work best when less is shown and our imaginations are allowed to take over and run wild.

The Hodgson’s are our family in trouble, and all the actors do good work in portraying the terror and shock at these supernatural occurrences. In many ways they’re not that different from the first film’s family, having hit on hard times and looking for a fresh start; this does bring a slight over familiarity to the story. The brunt of the hard work goes to Madison Wolfe who plays Janet, the main demon possessed girl who. Apart from a dodgy English accent, she really sells it in the fear department. Especially when she is being used by the evil spirits and has to show a radically different personality.

What really grounds this film though are the characters of Ed and Lorraine Warren. We’ve got to know them over two films now and what makes them tick and Wilson and Farmiga bring real warmth and affection to the characters. It certainly makes the scares that more effective when we care about the people involved and they’re not solely used as cannon fodder.

‘The Conjuring 2 is another solid instalment from Wan who can do these sort of films in his sleep by now.’

It may not be as good as its predecessor and falls in some of the trappings of the haunted house film, but it will almost certainly achieve its desired effect of terrifying and unnerving the majority of those who go to see it.