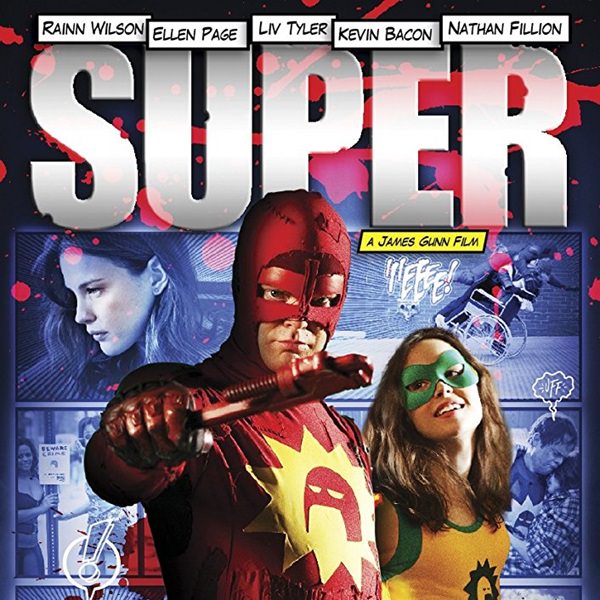 ‘To rescue his wife from a drug dealer an ordinary guy transforms himself into the Crimson Bolt.’

Directed by James Gunn, Super is probably the film that got him the Guardians of the Galaxy (2014) gig, and proves a great test run of what he can do with the super hero genre. Usually labelled as a poor copy of Kick-Ass (2010) as it was released not long after, Super was unfairly ignored and never got that much attention (although that might have changed since the director has gone on to join the Marvel Cinematic Universe and made one of their most successful movies).

It’s a shame really because it’s a good film in its own right, and although Matthew Vaughn’s film does share certain similarities, Kick-Ass feels very much part of the comic book world whereas Super has more of an indie feel, and set in a more realistic environment.

Unlike most superhero films, Super is set in, what feels like, a small town and follows Rainn Wilson’s short order cook, Frank Darbo, as he slowly transforms into a wrench wielding, costumed vigilante, The Crimson Bolt, after his ex-addict wife (Liv Tyler) leaves him for local drug dealer Jacques (Kevin Bacon). He’s also joined by Ellen Paige’s Libby as sidekick Boltie.

What makes Super stand out from other comic book films, is it’s a really localised story and self-contained, with no real high stakes and more an emphasis on Franks personal journey than some grand world saving plan, which is actually a refreshing change in tone. You could even argue Super isn’t really a superhero film at all as it’s more about a man at the end of his tether, who’s been kicked down by life so much, that going around dressed up in a red costume and beating criminals with a pipe wrench is more a form of personal therapy than say, seeing justice done and helping people.

It’s also incredibly black in its humour, to the point you’ll almost feel guilty for laughing, as Frank goes around beating and hospitalising law breakers with no sense of proportion of what the crime is. One scene, for example, has him witnessing someone pushing in a queue, so very publicly goes to his car, change into his costume and then crack the head open of this queue jumper. It would be shocking if it wasn’t so funny.

Gunn isn’t afraid to include a fair amount of gore with the extreme violence, which some might find too far in the realm of exploitation, but he’s able to counteract all that with an undercurrent of heart and drama about a man just trying to save his wife.

Rainn Wilson is very much at the heart of this film, and gives a wonderful and convincing performance of a man on the edge. He is able to straddle Frank between psychotic and heroic really well and able to gain just enough sympathy from the audience so he can still be labelled the protagonist, albeit a tragic one.

Also, to drive that point home even further of his mental instability, Gunn has him believe the main inspiration for his crusade is coming from a “vision” (of which he has many) of a fictional public-access TV superhero known as the Holy Avenger giving him the idea of the Crimson Bolt mantle. It all adds a layer of surrealism and a distinct visual style that helps it stand out from other superhero films.

Despite Frank’s rash and psychotic behaviour, we’re still able to root for him mostly down to having Bacon’s Jacques as a counterpoint. Bacon looks like he’s having a ball playing this legitimately despicable character, who you’ll love to hate, and sets the whole film in motion when he takes Franks wife and gets her re-hooked on drugs. Fortunately to aid the Crimson Bolt on his quest is Paige’s kid sidekick Boltie, who is just as unhinged as Frank. With an extra dose of hyperactivity, these two make a great, yet frightening team.

Also, for a small indie film with a tiny budget, Gunn shows he can handle and produce a great action scene in that final act. It’s really the only action sequence in the movie, but Gunn has been building to this moment throughout and pulls out all the stops for this cathartic set piece that, although small, makes Super feel like a genuine superhero movie.

‘Super is a superhero film for those who are looking for something a bit different in their caped avengers.’

It won’t be to everyone’s taste and like Marmite, your either hate it or love it. You may find the extreme violence and gore very offensive, but on the other hand, you may love it’s indie aesthetic, pitch black humour and different approach to the comic book film.