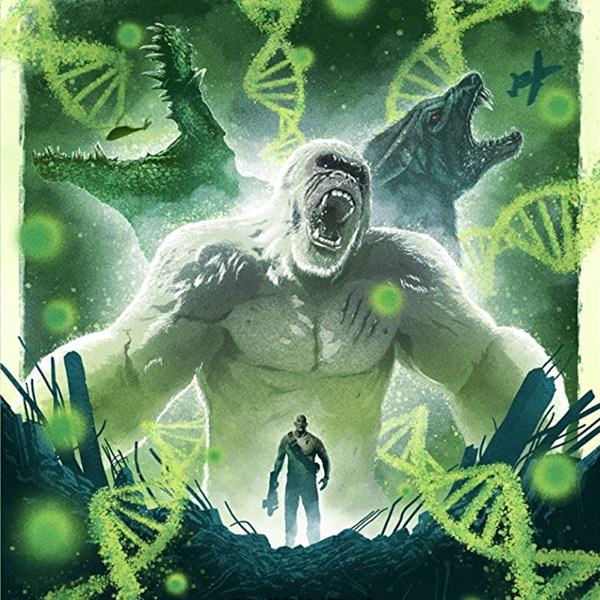 ‘A primatologist and geneticist must stop animals infected by a rogue experiment from destroying Chicago.’

Dwayne Johnson fighting giant mutated animals sounds like the perfect combination for a trashy but fun popcorn movie. Loosely based on the video game, Rampage is exactly that, and is the ideal vehicle for the larger-than-life actor. It’s the kind of film custom built for the former wrestler, and only someone with his charisma could be believably seen in this role of man verses monster.

Directed by Brad Peyton, the plot follows Davis Okoye (Johnson), a primatologist who’s part of an anti-poaching unit based out of a wildlife preserve in San Diego. Amongst his friends is an albino gorilla called George, who he’s raised since he was young.

ne night, George comes into contact with a strange chemical, and the following morning Davis finds him significantly bigger and more aggressive. Not long after, other animals are exposed to the genetic-altering substance. Now, with discredited scientist Kate Caldwell (Naomie Harris), Davis finds himself on a mission to save the city, and help save his friend.

Unsurprisingly, with a title like Rampage, you’re hardly going to expect a subtle, nuanced, Oscar-worthy movie. This isn’t the kind of cinematic experience that’s going to tax your brain and challenge your outlook on life. Actually, the marketing has been very upfront about what you’re getting, with this being a pure popcorn movie through and through. Meant to entertain and thrill for a couple of hours, it’s a film you’ve probably already made your mind up on before seeing it. In that regards, this is a perfectly fine movie that does exactly what it says on the tin.

The story is straightforward enough, and is purely an excuse to see giant monsters fight each other and Johnson do what he does best. There’s nothing original about it in the least, and is basically following the latest trend of giant monster movies that has recently come into fashion over the past few years.

It’s a film that knows what it is and doesn’t try to make itself more, or pretend it’s doing anything different. Following the well-known tropes of this popular genre, it’s a story that will be highly predictable, and at no point will you be caught off guard or surprised. Clearly structured then, this is in every regard the very definition of disposable, and is akin to comfort eating. You know this isn’t good, but you find it satisfying nonetheless.

Having said that, this is not a terrible movie by a long stretch, and as mentioned, if watching it, you’re likely just in the mood for some mindless carnage and destruction. Happily, that is unquestionably what you get, and a large chunk of energy has gone into making Rampage as fun as possible, which it mostly succeeds at. What it lacks in originality, it definitely makes up for, in giant monstrous animals battling the military, each other, and enough city destruction to satisfy the most devoted of action movie fans.

Although nothing special and something we’ve all seen before in other like-minded films, it’s all shot with real panache and a fast exciting pace to keep things entertaining. On top of that, all the visual effects to bring these rampaging creatures to life are good, blending well with the practical sets and stunts.

As always, Johnson raises any movie he’s in by his mere presence and sheer force of will, and it’s no different here. He plays that likable, wisecracking action hero flawlessly, and puts in one hundred and ten percent effort every time he’s on screen. What’s more, he has a believable rapport with George the gorilla (motion captured by Jason Liles), and you really buy into that relationship in those opening scenes. Despite the most minimal of characterisation, he sells it, making him by far the best thing about this movie.

However, on the other side of pendulum, none of the other cast have a fraction of that kind of development. A lot of them struggle to bring anything more to their thinly written characters, and just feel like that extra obligatory human element the movie has to have. Harris is good as Davis’ female ally, but is clearly there for Johnson to bounce off, and is given a typical tragic backstory as a reason for her to be there. The same goes for Jeffrey Dean Morgan’s agent Russell, who makes no attempt to disguise the fact he’s doing the exact same shtick from his character in The Walking Dead (2010-present). Even the antagonists in the shape of Malin Åckerman and Jake Lacy fail to leave an impression, and give terrible, lifeless performances.

‘Although you could argue there are far better blockbusters to pick from out in the world, not all of them have Dwayne “the Rock” Johnson in them. Bringing a level of star power not many can match these days, and by his presence alone, Rampage is still a great deal of fun, regardless of its many flaws. With giant animals causing absolute mayhem, you know what you signed up for the moment you walked into this movie, and are probably going to enjoy it regardless of what the critics say.’