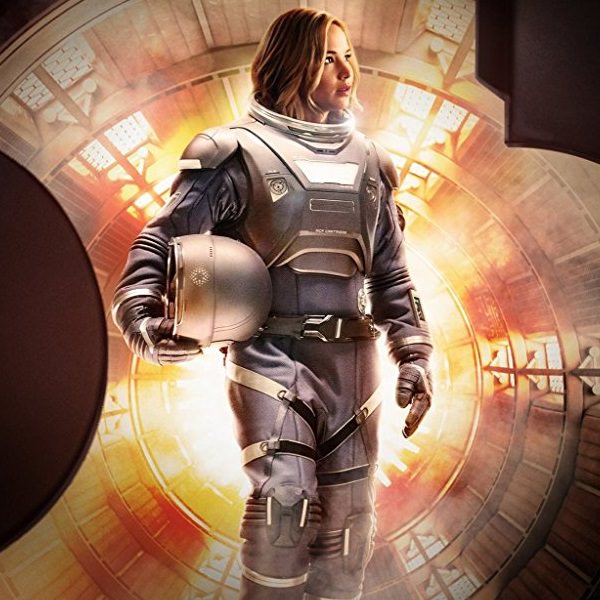 Passengers, by Norwegian director Morten Tyldum, tells the story of the starship Avalon’s 120 year voyage across the universe to a new colony on Homestead II. Aboard the ship are over 5000 passengers in suspended hibernation expecting to wake up towards the end of their journey while ship cruises along in autopilot mode for the bulk of the trip.

All is well until a malfunction causes one of the hibernation pods to wake up its passenger, mechanic Jim Preston (Chris Pratt), ninety years to early. After spending some time alone Jennifer Lawrence’s writer, Aurora also awakens and the two must learn to cope alone while also experiencing a growing attraction between each other.

It’s a story that has potential and briefly explores those classic what-if questions and moral conundrums that science fiction can be so good at if done right, but as the film progresses there’s that slow realisation that this isn’t Tyldum’s priority. In fact, he plays it pretty safe with the whole structure of this film, which is very formulaic and predictable.

The alone-in-space format isn’t something new and we’ve seen it play out in many different styles before which Tyldum doesn’t even attempt to mix up or do anything different with. He gives us no real surprises or twists to help elevate it above that basic concept and what we’re left with is a mash up of other films its borrowing inspiration from with nothing truly fresh or original offered; it becomes a very bland experience.

It’s essentially designed to serve two of Hollywood’s biggest stars at the moment, and showcase Pratt and Lawrence, instead of presenting an engaging and thought provoking sci-fi film. That’s not necessarily to Passengers detriment though as it’s just a matter of what Tyldum wants to focus on, and focusing on the characters is no bad thing when you have the star power of Pratt and Lawrence. The first act is particularly good as it follows Jim as he wanders the ship and slowly comes to the conclusion that he is going to spend the rest of his life alone.

In fact, although many are labelling this film as “Titanic in space”, those first forty minutes remind me more of Castaway (2000) as Jim slowly has to adapt to his isolation and fend for himself, not unlike Tom Hanks. Fortunately, Pratt has more than enough charisma to hold the film on his own during that first act, and shows he can do more than just play that handsome rogue type from Guardians of the Galaxy (2014) and Jurassic World (2015), but can actually act, bringing some pathos and depth when needed. He proves particularly skilful in portraying a range of emotions.

First, there’s that gradual rise in panic and anger about his predicament, then the pleasure his new freedom brings him with all the luxuries the Avalon has to offer, before falling to utter despair at the loneliness where the only source of company is Michael Sheen’s robot bartender. He’s a well-rounded and fleshed out character, and Pratt gets us to really feel for him so when he makes a morally dubious decision, that I won’t spoil here, we can still completely emphasise with him.

Lawrence also gives a solid performance as Aurora, the strong willed writer looking for adventure this trip offers. She’s her own autonomous character whose more than just a love interest. Together with Pratt, they elevate this basic premise as the film becomes more about them than the sci-fi stuff. They ooze chemistry and we can easily bye into their relationship. It’s made more effective due to the fact that Tyldum takes his time to build this blossoming romance where it all feels very organic and not forced.

Visually, the film looks beautiful with even the exterior of the ship being something quite unique. The production design is all very polished and Tyldum gives it a very clinical aesthetic which fits and goes with the isolating feeling he’s trying to communicate, as these two people aren’t just separate from the rest of society but also from the organic and natural world where everything around them is so artificial and unreal.

Those expecting a high octane thrill ride, as the trailers suggested, will be sorely dissatisfied as the focus is more on the characters, creating a romantic drama that so just so happens to be set on a space ship, and the bulk of the action happening towards the end. Tyldum is clearly more interested in Jim and Aurora and their emotional journey than spectacle and action (although you do get some cool anti-gravity scenes in a swimming pool).

As a romance then it doesn’t really offer anything special as it hits the familiar beats with nothing that’s really unexpected or original. In fact, our two lovebirds go through that well known formulae of getting to know each other and slowly falling in love; then to a period of relationship bliss before the man ruins it somehow, and then something happening to bring them back together again.

‘Passengers had such great potential.’

It could have been something great if Tyldum balanced the romance with the sci-fi element a bit more evenly, or even if he tried something different with the structure and formulae. Despite its predictability though it’s still enjoyable experience, thanks largely to Pratt and Lawrence’s performance, and some cool looking visuals.