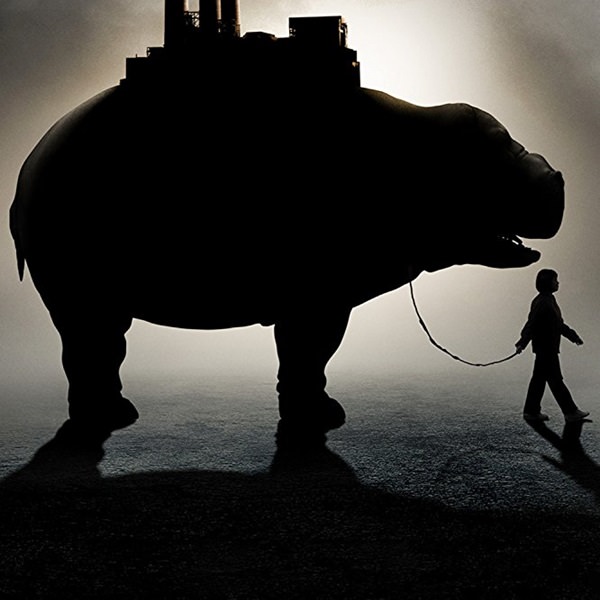 ‘Mija must conduct a daring rescue of her dearest friend, a strange animal known as Okja, from the clutches of a multi-national conglomerate.’

Four years after the excellent but underrated Snowpiercer (2013), Bong Joon-ho finally gives us his latest film in the form of Okja, which has had its worldwide release on Netflix. Being the first streaming giant’s original to get its premier at the Cannes film festival, it’s also reignited the recent debate of whether films lose something of their legitimacy without a theatrical release. With many booing when the Netflix logo appeared, it’s another example of the changing culture of how we watch movies, with many traditionalists still arguing for cinema supremacy. Regardless, whatever your stance is on this debate, Okja is still a film worth seeing, however you may do that.

Starting in 2007, Lucy Mirando (Tilda Swinton), newly appointed CEO of the Mirando Corporation, unveils the new super-pig they have been breeding, a new and efficient food source which will apparently solve world hunger, as well as turn a sizable profit. Mirando sends twenty six of their best super pigs to farmers around the world to see how they do, and announces in ten years one will be selected as the winner.

Jump forward a decade and we meet Mija (Ahn Seo-hyun), the granddaughter of one of the farmers. Living in the wide open mountains of Korea, Mija has developed a close bond to her female super-pig named Okja, and is devastated when she is declared the winner by Mirando spokesperson and zoologist Dr Johnny Wilcox (Jake Gyllenhaal) and is taken away to New York. Determined to get her friend back, and aided by the Animal Liberation Front, led by Paul Dano’s Jay, she ends up going on a life changing journey.

Whether it’s his monster movie Host (2006), or the aforementioned post-apocalyptic Snowpiercer (2013), Joon-ho is excellent at taking well known genres and plot outlines, and doing something fresh and original with them, and Okja is no different. On a surface level, it’s a simple story about a child having to rescue her animal friend, but underneath that, there’s a multi layered narrative looking at a number of topics.

This is dense and mature storytelling at its best, told through the sweet tale of a little girl trying to get back to her best friend, who just so happens to be a giant pig-like animal. However, despite being about a child and her animal companion, this is no kids film, and delves into matters of media manipulation, corporate greed, GM foods, and animal rights. What’s more, with a bittersweet ending and some disturbing images, this is a movie best left for older viewers.

Joon-ho takes his time with setting up his world, keeping the story unfolding at a steady pace. The tone is also skilfully balanced, where it’s appropriately dramatic for the more serious themes, but also given a lighter satirical edge, including moments of broad comedy. Really though, at the heart of the story, is Mija and Okja, whose relationship is the lens in which everything else is examined. In fact, the first twenty minutes is given over solely to introducing and developing their friendship. We watch these two characters happily wander the lush Korean forest just enjoying each other’s company, feeling very akin to Hayao Miyazaki’s My Neighbour Totoro (1988).

Seo-hyun is astonishing as the young Mija. For someone who has to do a lot of acting and reacting to an imaginary creature, she gives a really believable and authentic performance, which even experienced actors would struggle with. Because of her, you really buy into her love for Okja. She certainly helps in making her feel more real and tangible, and as the centrepiece of the movie, she carries the whole story, keeping us emotionally engaged throughout.

A mix between a Hippo and a Manatee, Okja truly is a gentle beast, and she’s brought to life via some brilliant CGI. You can almost feel her leathery texture, and although clearly computer animated, she blends in well with the practical environment, and seamlessly interacts with the physical world around her. Combined with an expressive face, soulful eyes, and some reasoning intelligence, you’ll believe you’re seeing a real animal who you’ll sympathise with and care for straight away.

Unfortunately, outside of Mija, there are a lot of supporting players and not everyone has enough time to get properly fleshed out. Swinton is always good as that cold and ruthless antagonist, and she slots perfectly into the role of CEO at a massive conglomerate business, but has little else to offer. Similarly, Dano’s ALF leader brings a mixture of empathy and steely determination in his pursuit for justice, but we know nothing about his background or motivation. Wilcox fares the worse, and his character feels really out of place. Gyllenhaal plays him eccentric and over-the-top, looking and acting like he belongs in an entirely different film altogether.

‘With some well filmed and executed set pieces accompanied by a great soundtrack, Okja is another excellent film by a director who has his own unique style. Along with a diverse cast, he proves effective in blending Korean and American film making, adding an international flavour to his movie while still being accessible for western audiences. With a strong thematic story, there’s multiple layers of enjoyment to get out of it. Combined with an excellent performance from Seo-hyun, and solid visual effects to bring Okja alive, there’s a heartfelt story about the lengths people will to go to help a friend.’