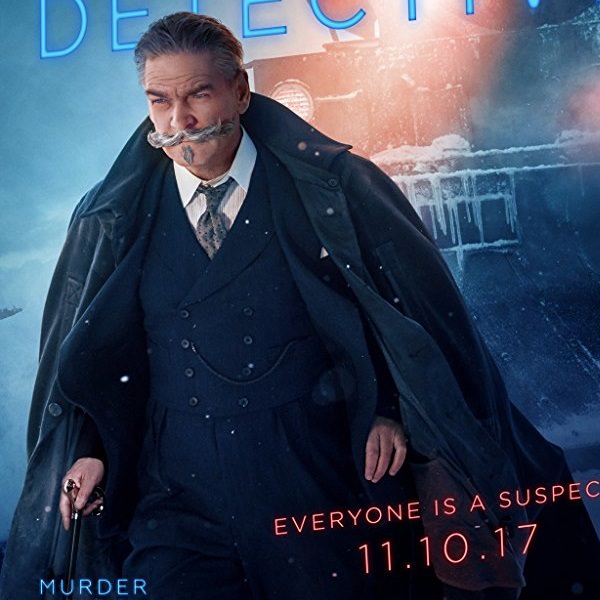 ‘When a passenger is found stabbed to death on the Orient Express everyone becomes a suspect.’

Adapted from one of Agatha Christie’s popular Poirot novels, Murder on the Orient Express is now the fourth version of this famous detective story to be brought to the big and small screen. Directed by and starring Kenneth Branagh, it’s another murder mystery we’ve seen play out countless times. Yet, that’s not to say there isn’t value in retelling a familiar tale if you can offer a fresh take on the story and introduce it to a new generation.

Set in the 1930’s, the story starts with world-renowned detective Hercule Poirot (Branagh) taking a much needed break between cases. Looking forward to some rest, he takes a ride on the legendary long-distance railway service, the Orient Express. Once on board he meets an assortment of individuals and begins to enjoy his long journey of peace and quiet. However, when the train is stranded and one of the passengers is discovered stabbed to death, Poirot must use his exceptional skills of deduction to catch the culprit.

Having never read the novel or seen the various adaptations, I can only judge this movie on its own and can’t compare it to the other versions. Happily then, as a standard period set murder mystery, this is an engaging and thoroughly enjoyable film. Like most mystery stories, it’s success relies on the crime itself, the suspects, and the coherence of how it all comes together. Plus, being able to come back to this film depends on having interesting characters, especially the protagonist. Luckily, Branagh has all of that at his disposal from the source material, and executes it all with great efficiency.

When it comes to the story, he proves a deft hand in getting the complex plot to make sense. Indeed, amongst all the suspects and their various backgrounds and motives, you always have an understanding of what’s going on. Saying that, nor does Branagh make it too easy, as you’ll be guessing all the way through who the killer is, unless of course, you’ve already seen one of the other versions. Regardless, he keeps the balance just right, and where many of these type of films either dumb it down too much or make it too convoluted, here, the plot is perfectly harmonised. As a result, when that pay-off comes at the end, you’ll not only be utterly surprised, but amazed at how you missed it.

Not only is it a well organised and structured story, but it’s also a solidly filmed and paced movie. Although a slow start in getting all the characters set up and introducing Poirot, once the murder takes place and the investigation begins, the movie turns into a riveting whodunit that will have your eyes glued to the screen right to the end. For what is mostly a series of interviews and conversations, Branagh does a superb job of keeping it all exciting, adding a really cinematic, polished and visually appealing aesthetic to help it stand out. Having directed a substantial amount of Shakespeare in his time, he proves a suitable choice to lead this dialogue-heavy and more thoughtful film.

What also helps, is the fact that there’s actually some humour littered throughout the film. Where most of these murder mysteries tend to be really sombre and depressing in tone, Murder on the Orient Express has a much needed lightness about it. These moments are skilfully placed at the right times, and they never undermine the more introspective and serious elements.

Part of that levity definitely comes from Poirot himself, and his amazingly eccentric moustache. it’s refreshing to have a hero who doesn’t have some kind of tortured past or vice for a change. This isn’t a man whose job has taken a piece of his soul like so many other fictitious sleuths, and as a performance, Branagh does brilliant work as the world’s greatest detective. He plays him almost as someone with OCD, which he uses to his advantage, making him both highly observant and meticulous. Many people look at David Suchet as the definitive Poirot from the long running TV show, but Branagh is really good here, as he’s not only effective and ruthless as a crime solver, but he infuses him with compassion and gentleness as well, aptly balancing both those sides of his personality perfectly.

Branagh’s not alone though, and is supported by an excellent cast who fill out the rest of the suspects. Despite having a lot of characters to get through in under two hours, screenwriter Michael Green does a good job in fleshing them out just enough for the audience to get a grasp of who they are. Yes, there are a few that get left at the wayside in terms of development, but as the story progresses and we get more details, depth is added to the extent you feel the shock when the truth is finally revealed. For example, taking a break from Star Wars, Daisy Ridley is good in a different role, and her governess is someone who even gives Poirot a run for his money, and likewise, Josh Gad is surprisingly skilled in a more dramatic role.

‘On the whole though, this is a Poirot story, and despite the lack of fully formed supporting characters, as the focus, he’s a fascinating and compelling individual, brought to life by Branagh’s spot-on performance. With a fantastic and claustrophobic set, an engaging mystery with an emotional and satisfying climax, Murder on the Orient Express could very well kick-start a new and different franchise. One that doesn’t depend on explosions and big set pieces, but rather a man and his moustache quietly solving crimes with his intellect, and not his fists.’