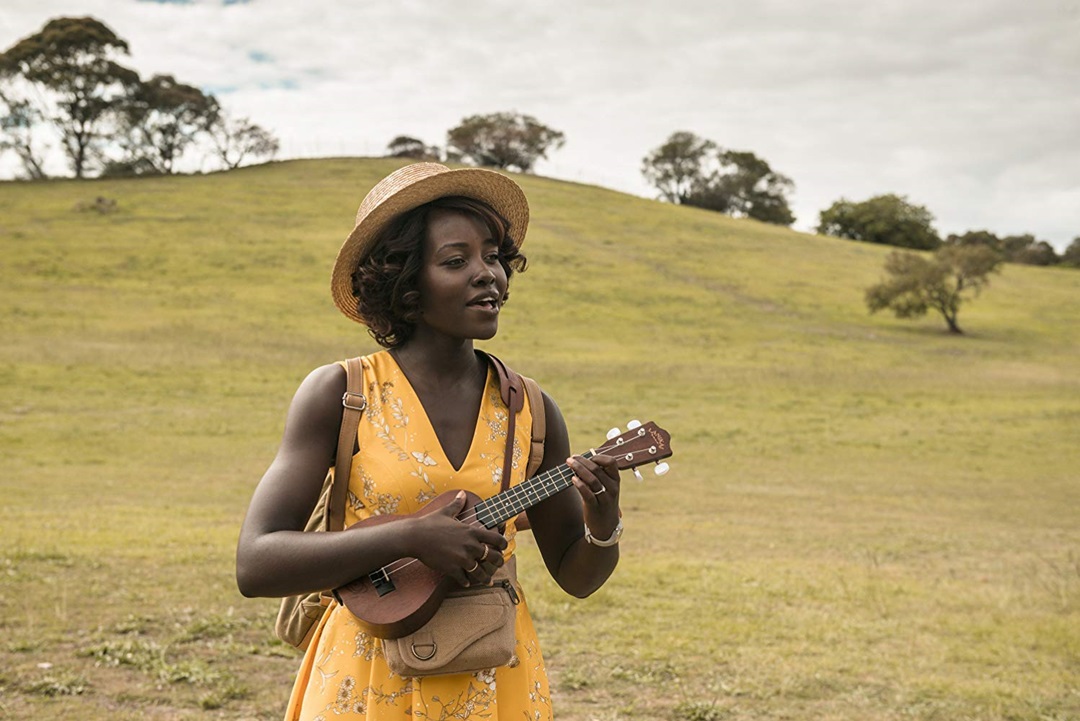 A washed-up musician chaperone’s his nephew on a field trip and takes a liking to the teacher Miss Caroline. Suddenly, and without warning, they find themselves in the midst of a zombie invasion.

Getting a digital release on Sky and Now TV, Little Monsters is the latest offering of the zombie comedy. Ever since Shaun of the Dead (2004) perfectly mashed up these two opposing genres, there’s been a countless number of imitators. Some good and some not so good. Fortunately, this newest addition belongs in the former category, and is an enjoyable way to kill ninety minutes.

Directed and written by Abe Forsythe, the story centres around washed-up musician Dave (Alexander England). After a disastrous break-up and with nothing better to do, he decides to chaperone his nephew’s school trip. Smitten with the school teacher, Miss Caroline (Lupita Nyoung’o), Dave’s chance for new romance is foiled when a zombie outbreak occurs. Now Dave, Miss Caroline and children’s TV presenter Teddy McGiggle (Josh Gad) must work together to stay alive and protect the kids from the undead.

‘With an oversaturated market of zombie media, Little Monsters is hardly breaking new ground in the genre.’

Structured like most zombie films, it hits all the familiar story beats we’ve seen a hundred times before. Nevertheless, it’s easy to get caught up in the gory fun the movie exudes. Forsythe injects such an infectious sense of joy into this horror film, you’ll happily overlook some of its formulaic tendencies. It’s a competently made movie that knows all the standard tropes and tricks of the trade. Not trying to be anything more than it is, if you’re a fan of everything zombie related, there’s very little to complain about.

What also helps is that the film works as an effective comedy. The humour is mostly character-based, and Forsythe rightly takes his time in setting everyone up. He doesn’t just rush straight into all the carnage, but instead gives the whole first act over to establishing the main players and what makes them tick. Clearly some slapstick is utilised with visual gags and over-the-top antics. Mostly though, the majority of the laughs come from the characters and their interactions.

‘For this type of comedy to work, you have to have well-formed characters that feel real and relatable.’

Normally, zombie films are full of one dimensional archetypes that are predominantly there to be eaten in bloody fashion. Taking a different route, Forsythe firstly doesn’t fill his movie with loads of disposable people. Instead he keeps it intimate, with just three main characters. Secondly, the primary protagonist Dave is well fleshed-out and is given a believable emotional arc. At the beginning, he’s really unlikable and selfish, not thinking about anyone but himself. But as the story progresses, Forsythe skilfully peels back the layers to reveal an insecure yet sweet individual.

A lot rests on England, and he suitably does a great job in bringing out these different shades to Dave. Playing well against the endlessly versatile Nyoung’o, his transformation is believable with a wonderfully convincing performance. Miss Caroline may not be given as much in terms of characterisation when compared to Dave. Yet Nyoung’o really sells it as a teacher whose priority are protecting the kids at all costs. Full of upbeat positivity, even in the face of a zombie apocalypse she treats survival as a game for the children’s sake.

Speaking of which, all the child actors who fill out the kindergarten class are all appropriately adorable. It really makes the peril that more palpable when little kids are involved. Although they’re not given much to do, Diesel La Torraca who plays Dave’s nephew Felix does well and is really cute. Him and England particularly make an excellent double act as the tactless adult and innocent child. Watching Gad let loose as a famous children’s entertainer who’s real-life persona is far from altruistic is very entertaining.

‘Little Monsters is a solid and entertaining zombie film that no fan should miss.’

What it lacks in originality, it definitely makes up in laughs and gore. Not only that, it has characters you’ll actually care about and will want to see survive. Combined with a catchy soundtrack, it will certainly be the most fun you’ll have while watching people get eaten alive.