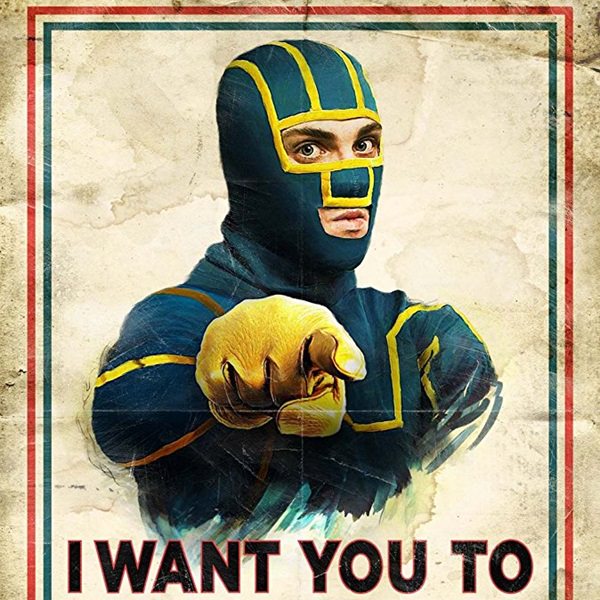 ‘Dave Lizewski suits up and with absolutely no powers or training decides to takes to fight crime as vigilante hero Kick-Ass.’

Back in 2010, when the Marvel Cinematic Universe was still in it’s infancy, Matthew Vaughn directed and co-wrote this little known superhero movie Kick-Ass. Adapted from Mark Millar’s and John Romita Jr.’s highly subversive graphic novel, it took everything we knew about the comic book film, and turned it upside down with its self-aware and meta approach. It’s also a perfect example of a movie’s timing, because if it had come out now, it would’ve easily been swallowed up and forgotten in today’s saturated market of caped crusaders.

Set in a slightly more heightened but grounded world to our own, the story takes place in New York and follows geeky teenager Dave Lizewski (Aaron Taylor-Johnson). Inspired by his favourite comics, he decides to fight crime as a costumed vigilante called Kick-Ass, and with nothing but a green wetsuit, he soon becomes an internet sensation. However, it’s not long before he gets mixed up in real-deal crime fighters Hit Girl and Big Daddy (Chloë Grace Moretz and Nicholas Cage), and their very dangerous mission to take down crime boss Frank D’Amico (Mark Strong). Inexperienced and out of his league, things only get worse when Dave also makes contact with another masked hero called Red Mist (Christopher Mintz-Plasse).

What makes Kick-Ass special, is not only the fact that it’s a great comic book movie, with all the traditional tropes and beats that come with such a film, but it also twists them around with a self-referential edge. For example, unlike most other superhero films, comic books actually exist in this world, and therefore have characters who are fully aware of the various rules and clichés that come with this beloved genre.

So, while at the same time Vaughn is adhering to those well-known formulas and narrative structures, he’s also winking at the audience, letting us know he’s conscious of what kind of movie he’s made. This adds an almost satirical element to the story, providing something unique and fresh, and allowing the director to have some fun with it, as well as bring some levity.

This is very funny film that doesn’t take itself too seriously and has it’s tongue firmly in cheek. Even Dave himself acknowledges, in stereotypical voiceover, that he doesn’t have the conventional origin story like a tragically murdered parent, but just the desire to copy his favourite heroes. A lot of that humour comes from him trying to emulate these larger than life characters in a more grounded environment, which makes for some hilarious interactions. Despite that irreverent tone though, Vaughn does skilfully balance in some more weightier moments, and a great deal of heart and emotion runs throughout the movie’s runtime. Mostly, this comes from the characters of Hit Girl and Big Daddy, who as a father and daughter duo, bring quite a tragic aspect to the story.

Although grounded in terms of a realistic world where superpowers, aliens and multiverses don’t exist, there certainly is a more cartoon-like and elaborate aesthetic in the tone and visuals. Vaughn clearly shows this in the action set pieces, which are visceral, frenetic, and some of the best choreographed battles caught on camera. Whether it’s Big Daddy dispatching a warehouse full of gangsters in one glorious shot, or Hit Girl’s and Kick-Ass’s adrenaline-filled and climactic takedown of D’Amico’s empire, these are great set pieces that even give some of the prominent blockbusters a run for their money. Due to excellent characterisation, they’re also emotionally charged and very engaging.

It’s not surprising when you consider it’s made by the same creative mind, who only a few years later, would make the equally outlandish and self-aware Kingsman franchise. This isn’t a safe, family friendly 12A film, and Vaughn feels no hesitation in filling these action sequences with plenty of blood and dismembered limbs. The only issue then, is both the cartoon and gratuitous elements make it hard to pin down who the actual target audience is. Obviously not for younger viewers, but maybe to childish for adults, this is a movie that will have a limited and niche appeal.

If you do love Kick-Ass though, part of it will definitely be due to the characters and performances. As the lead, Taylor-Johnson brings genuine likability to Dave, and a real everyman quality that feels relatable. Moreover, it’s a vicarious role in which the audience can put themselves in. I mean, who hasn’t dreamed of putting on a costume and playing a superhero; Dave is someone who’s just decided to go ahead and do it. Taylor-Johnson does a good job, but it’s Moretz and Cage who steal the movie as the unhinged Hit Girl and Big Daddy. Channelling Adam West’s sixties Batman, Cage’s usual over-the-top antics slots perfectly into Vaughn’s world. Regarding Moretz, this was a breakout role, and it’s not hard to see why. She certainly leaves an impression as the psychotic and profanity spewing Hit Girl.

‘Kick-Ass is a thoroughly entertaining movie from start to finish, and offers something truly different from your average superhero flick. Action-packed and funny, it has everything you would want from a comic book adaptation, despite it clearly not being everyone’s cup-of-tea. With engaging characters, bright and loud visuals, for what was only he’s third film, it’s a great calling card for Vaughn, that proved him a director to watch out for.’