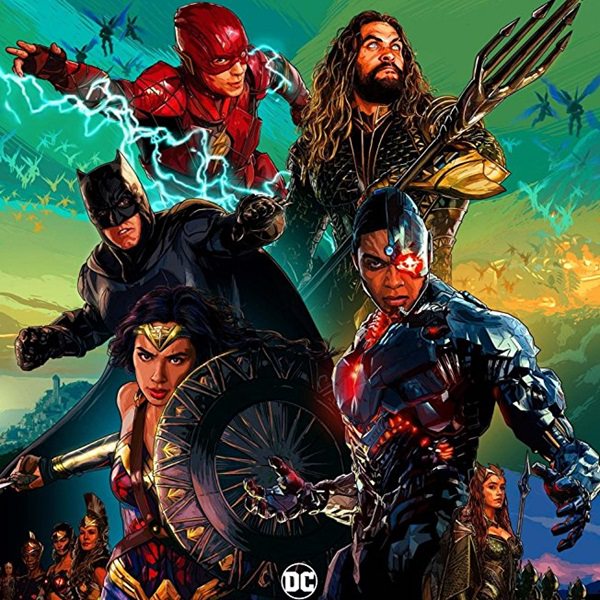 ‘Bruce Wayne with his ally Diana Prince form a group of superheroes to taken on a great enemy.’

After a mere eighteen months or so since the mixed Batman v Superman: Dawn of Justice (2016) was released, we’re now already getting the DC Extended Universe’s eagerly awaited superhero mashup, Justice League. Rushing to keep up with Marvel, bar Wonder Woman (2017), the studio’s even skipped the majority of the member’s solo films, and squeezed in a year, what the MCU took four to do. There’s no doubt this is going to be a big movie, and seeing these iconic titans together on the silver screen is going to be a huge draw for audiences. But, with it being hurried through development, alongside the numerous other issues during production, will this be as good as the more established Avengers?

Directed once again by Zack Snyder, the plot follows Batman’s (Ben Affleck) continuing efforts to bring together a team of gifted individuals to fight an imminent galactic threat. Alongside some of DC’s most iconic hero’s like the Flash (Ezra Miller), Aquaman (Jason Momoa), Cyborg (Ray Fisher) and Wonder Woman (Gal Gadot), they will face alien warlord Steppenwolf (Ciaráns Hinds) and his army of Parademons. Typically, this also involves finding three McGuffins known as the Mother Boxes, and stopping them from falling into the enemy’s hands.

Right from the start, it’s clear this film is going to have problems. Every part of it feels messy, like it was quickly put together to meet a deadline and keep up with other superhero shared universes, instead of focusing on making a good movie foremost. From the visual effects, right down to the script, a lot of this film feels like it was quickly put through production to hit a target, and consequently, the various aspects that go into making a big blockbuster suffer for it. It’s a formulaic story with very little originality brought to it, with audiences having seen similar hero team-ups many times before.

Whether it’s the Fantastic Four films, X-Men, or any other kind of group origin, they generally all follow the same pattern of reluctantly agreeing to work together, to a second act break-up or fight, only to come together the better for it in a big finale. Unfortunately, Justice League is no different, And Snyder offers nothing fresh to help it standout beyond this over-familiar blueprint.

The characters feel incredibly shallow and under developed, and unless you’re a fan of the comics, don’t leave much of an impression at all. Apart from the slightest of introductions in Batman v Superman, we know next to nothing about most of these people and their backgrounds, and yet, we’re expected to care about them straight away. By showing no patience and skipping over standalone movies for each hero, we miss out on vital characterisation, which doesn’t allow for a significant chunk of the audience to get a grasp on these important characters.

It’s only Batman and Wonder Woman who feel the most fleshed out, and that’s mainly because we’ve seen them in previous DC instalments. Relatedly, this also contributes to the lack of chemistry between them, and any attempt by the script to create any, just ends up feeling forced and unnatural. This equally extends to the flimsy antagonist in the shape of Hinds’ motion capture performance, as all he does is go to different locations spurting out monologues about taking over the world, and basically providing a foe for the league to battle.

Speaking of which, there is an over reliance on CGI, and not all of it works. It feels rough around the edges and over saturated, making what you’re watching look more like a video game cut-scene than actual movie special effects. Saying that when done well, and combined with the action sequences, it does provide some excitement, and there is something to be enjoyed seeing these classic superheroes fight alongside each other. They each bring something unique with their various abilities, which visually, provides something distinct when compared to your average action film.

The main performances, for the most part, are all solid, and even with the poor script, they each do their best with the material they’re given. Truly, it’s the newcomers who struggle the most, and as their main introduction into this world, a lot rests on them, which ultimately leads to mixed results. Miller’s Flash is obviously meant to be the funny one, but his quips and one-liners don’t always land, and yet, he does bring a lot of heart to the character.

For his breakout role, Fisher similarly does a great job as the reluctant hero Cyborg, who’s struggling with the sudden changes to his body and increasing lack of humanity. Saying that, as someone who plays an important part in the story, it would have been helpful to have an origin movie about him beforehand. Momoa’s Aquaman is destined to be a fan favourite, but again, unless your familiar with the source material, will be frustrated by the lack of backstory.

Gadot proves to be the best thing in the DCEU, and she’s brilliant at changing her Wonder Woman depending on the era. Here, she’s a more seasoned hero, and all that naivety from her solo movie has melted away to reveal a more hardened warrior. Likewise Affleck’s Batman has gone through something of a makeover. One of the main criticisms of Batman v Superman was that it was too bleak and dark, and as a result, the Dark Knight in this film has had some wit added to him, and more of a sense of humour.

In fact, the whole film looks like a good dose of levity was injected into it, although more as a response to the fans than a pre-planned intention. Another reaction has led to a leaner two hour runtime, which is both a bonus and a negative, as it provides a faster pace and more streamlined narrative, but probably cuts out much needed backstory for a lot of the characters.

‘Justice League is not great. Nor is it Warner Brothers’ answer to Marvel’s other and more successful superhero team-up. Sacrificing character development and plot just to dole out this movie quicker, has only resulted in a sloppy and messy comic book film, that only fans of the source material will be able to follow completely. However, if you’ll looking for nothing more than an action-packed adventure, full of your favourite heroes and classic save-the-world stakes, then this may very well be the film for you.’