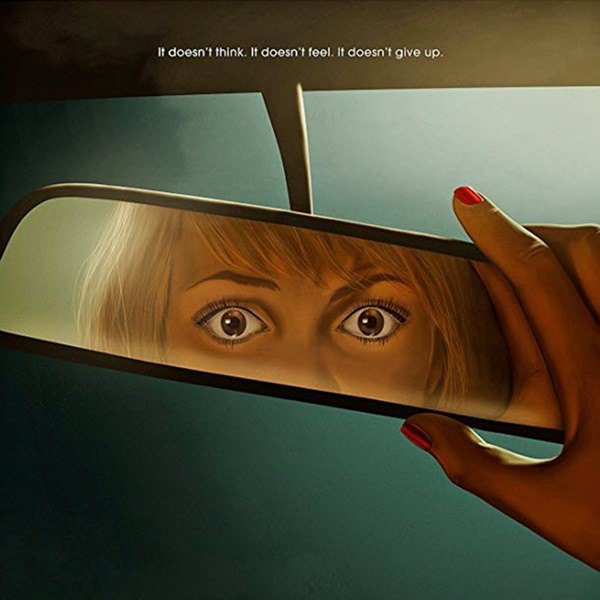 ‘A young woman is followed by a malicious supernatural force.’

Directed and written by David Robert Mitchell, It Follows’ is another standout horror film that looks to the past for its inspiration, as it has a very retro look and feel about it. Like recent horrors The Babadook (2014) and Lights Out (2016), it also goes deeper than your average scary movie. Using its monster and premise as a metaphor for something more than just frightening an audience, this film is made great by engaging with an aspect of human society and contemporary culture.

Based around a group of teens, the story focuses on Detroit college student Jay (Maika Monroe), who has just started seeing a boy named Hugh (Jake Weary).

Things are going well until they have sex together, where straight after Jay is rendered unconscious and tired up. When she wakes up, Hugh tells her that he has passed on a supernatural curse to her, where from now on she will be followed by a shapeshifting entity which only she can see. Encouraged to pass it on as soon as possible and never let it touch her, she’s left with this strange creature always lurking towards her.

It’s an original concept that Mitchell uses to great effect. Swapping typical jump scares for a more foreboding mood and a constant feeling of dread, It Follows is dripping with atmosphere. Indeed, this is far more effective than some cheap trick to get us to jolt out of our seats. Mitchell achieves this never-ending suspense with his terrifyingly created monster and the rules it exists within. This thing travels at a snail’s pace, and like the terminator, will not stop, only adding to the tension.

It’s a masterclass in minimalist film making, as it’s not what you see but what you don’t, and it’s filmed and edited in such a way that you’ll be scanning every inch of the screen for anything out place. The beauty of this monster is that it can be anyone, meaning Mitchell doesn’t have to rely on special effects or CGI, and he expertly preys on our fears with very little. Keeping it simple, we never really know anything about this “It” or its origins, just how it operates, which only increases the horror and doesn’t allow the movie to get bogged down in unnecessary exposition; we’re only told what we need to know.

Owing a lot to film makers like John Carpenter and George Romero, there’s definitely a similarity in It Follows style and aesthetic. In terms of Romero, there’s a hint of Night of the Living Dead (1968) with its slow moving but never stopping monster. Also, that ability to sustain a very suppressive feeling of dread and hopelessness. As for Carpenter, it’s the original Halloween (1978) that can clearly be seen as an inspiration with its suburban setting and youthful cast. Mitchell intentionally omits the adults like Carpenter’s original slasher, which adds another layer of helplessness and isolation for the group of youths. Combined with Disasterpeace’s electronic and retro-sounding score, all these elements work together to make an excellent, old-fashioned looking scary movie, that still feels like its own thing.

Still, this is more than a stylish monster movie, and Mitchell not only uses his film to scare, but also explore various issues and moral dilemmas. By taking some of the well-known tropes of the teen slasher, he is able to go a bit further and do something different with them. For instance, the established trend that it’s usually the promiscuous that die in horrible fashion is taken to a literal meaning, as this curse is passed on sexually like some kind of supernatural STD. However, at the same time, he even subverts it, as the only way to get rid of it, is to pass it on, meaning regular sex is what’s going to keep you alive, which also raises the ethical question of could you do such a thing? To pass it on and save your own skin.

The film is helped by a superb cast, and this small group of teens do a brilliant job of grounding this supernatural story and getting us to really care. None of them are basic horror archetypes like “the jock”, “the nerd”, or “the slut”, but they all feel like your average everyday teenager. Monroe’s the focus, and as the main heroine, she holds the story together perfectly, bringing a believable and engaging performance.

She’s also able to infuse Jay with a real and raw vulnerability, while at the same time showing an inner strength and determination, where you’ll be rooting for her to come out on top by the end. Unlike most teens in horror films, these are all switched on and resourceful characters, which makes a refreshing change. They do smart things and act in a way that’s authentic, where Mitchell looks like he’s put just as much thought into his characters than he has the horror.

‘It Follows is another recent addition to the horror film by a director who has an actual love for the genre and knows how to make it work. With its retro style, solid characterisation, and a unique subversive premise, Mitchell has made a movie that will truly get under your skin. Not only that, it might just put you off sex for a while.’