In the Tall Grass review – a solid little horror film 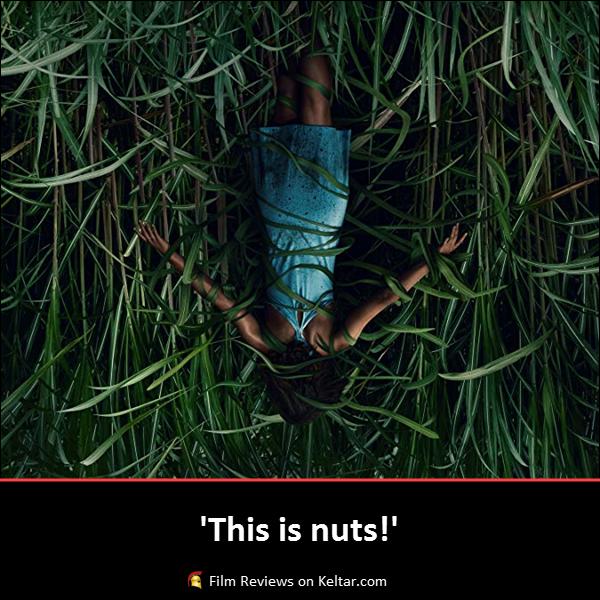 ‘In the Tall Grass (2019). Becky and Cal are lured into a mysterious field in Kansas. The lost siblings soon discover there is something sinister going on and make an attempt to escape the long grass.’

Based on a novella by Stephen King and his son Joe Hill, In the Tall Grass is an unusual horror film. Built around an intriguing concept and distributed as a Netflix Original, it definitely feels like the sort of movie made for the streaming platform. It’s unconventional and unique story will not be to everyone’s taste. Yet those who are drawn to it for those very reasons will find a different kind of scary movie, that will have you guessing to what it’s all about to the very end.

The story begins with siblings Becky and Cal (Laysla De Oliveira and Avery Whitted) driving cross country to San Diego. At six months into an unwanted pregnancy, Becky is visiting a family who want to adopt the baby. Things take a turn for the worse when they stop outside a giant field of tall grass and begin hearing a small boy named Tobin (Will Buie Jr.) call out for help. When they enter to investigate, they soon find themselves disoriented and lost. Realising this is no normal patch of land, a sinister force begins stalking them and keeping them from escape.

‘Directed and written by Vincenzo Natali, In the Tall Grass is an elusive film.’

There’s just enough of a story for you to work out what’s going on and follow the basic premise. On the other hand, there’s also an ambiguity to the finer details, leaving various openings for a number of different interpretations. What is this tall grass? What kind of power does it have and what are its intentions? These are questions that are left unanswered so audiences can come up with their own theories. This makes the film a really engaging experience and will have you paying close attention throughout.

As the director of some great low-budget movies like Cube (1997), Natali makes the most out of his limited resources. Minimalist film making at its best, with just a field of grass he brilliantly presents a high-end aesthetic to the film’s production. Credit has to go to the cinematography, as there’s a lot of style brought to the visuals. Despite the ambiguity of the narrative, Natali is skilfully able to tell the story primarily through what we see instead of just via dialogue.

‘On top of that, it also contributes to the horror element.’

Combined with some excellent sound design and a subtle but unsettling score, In the Tall Grass will certainly get under your skin and rattle your nerves. Natali takes the less-is-more route and allows our imagination to do the bulk of the work. By not resorting to a constant string of jump scares, he instead focuses on creating an unnerving ambience and foreboding mood. As a setting, the field of grass is appropriately claustrophobic, and you’ll feel just as trapped and suffocated as the characters.

If there is one weakness, it’s the under-written characters. So concerned with setting the tone and building that creepy aura, Natali forgets to flesh them out. At best their functional, and are largely there to service the plot instead of having interesting people we can care about.

Having said that, all the actors do well with what their given, effectively selling the fear of being alone and isolated. Standing out has to be Oliveira and Buie Jr, who clearly get the most to do. You can see real panic in Oliveira’s eyes as the vulnerable Becky, and her growing terror is extremely palpable. Buie Jr., for a child actor, has to do some heavy lifting in his portrayal as the young Tobin. Not wanting to give anything away, but he has a number of dimensions to his character, and nails every one of them.

Outside of those two, it’s Patrick Wilson who shines next. Getting to do something different and play against type, he seemingly has the look of a normal everyman. Behind that normalcy however, is someone who’s slightly off, and he displays that descent into madness aptly.

‘It may not answer all of the mysteries that it sets up, and the characters might feel inconsequential.’

But In the Tall Grass is a solid little movie from the master of horror. With a great visual style, an original sounding premise and a small committed cast, it’s a film worth putting on your Netflix list for a rainy evening.

Based on the Novella by