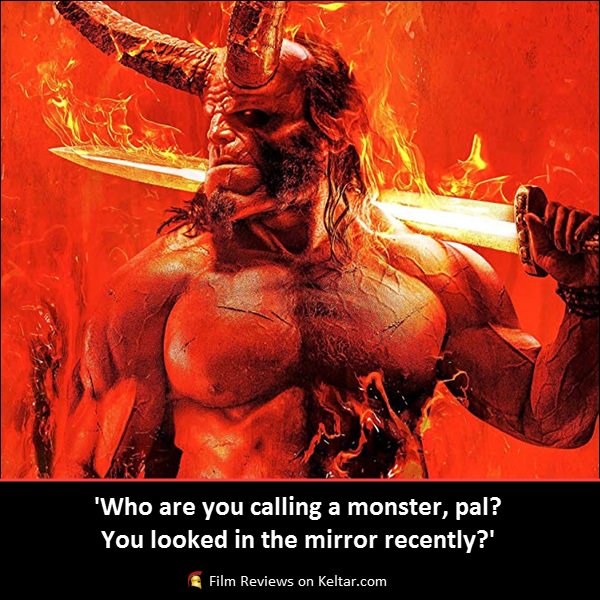 ‘A demonic being who fights for the side of light must do battle with an evil sorceress who wishes to start the apocalypse and end the world.’

2004’s Hellboy and its sequel were great examples of Guillermo del Toro’s visual style packaged within a more mainstream movie. Based on the comic book series, the source material was an ideal choice for del Toro to show us his unique brand of storytelling. He also had a perfect Hellboy in the form of Ron Pearlman. After The Golden Army (2008) del Toro struggled to get a third film made. As a result we now have the inevitable reboot, with the hopes of igniting a new franchise employing a whole new creative team.

Directed by Neil Marshall, the story follows David Harbour’s Hellboy. A demonic being summoned as a child during the Second World War, he is raised by occult expert Professor Bruttenholm (Ian Mcshane). Brought to America, he is trained to fight the forces of evil alongside supernatural allies Alice Monaghan (Sasha Lane) and Ben Daimio (Daniel Dae Kim). They must work together to stop evil sorceress Nimue (Milla Jovovich), who wishes to start the apocalypse and end the world.

‘With time between reboots becoming shorter and shorter these days, it’s getting harder not to compare them to their original counterparts.’

Hellboy 2019 is a prime example of this. In the past Marshall has directed some great films, including the excellent The Descent (2005). Not to mention some of the best episodes of Game of Thrones (2011-2019). Sadly, the same can’t be said for his new Hellboy, in which he struggles to recapture the magic del Toro did for his adaptations. He understood the essence of the character and what made him tick. Marshall’s take on the other hand is a by-the-numbers fantasy action flick, with very little style or substance added to it.

It’s another shallow attempt to restart a profitable franchise, and with that comes a lot of messy world building. Not necessarily Marshall’s fault, but he feels hindered by having to think several films ahead. Instead of just worrying about making a single good movie, he has to begin the creation of a whole universe. This produces a messy and incoherent plot where loads of exposition has to be unleashed on the audience, which is very jarring.

‘What also doesn’t help is the overuse of CGI.’

Unlike del Toro who made every effort to use practical effects, this move is riddled with green screen and computer generated monsters. Taking away any authenticity, it’s hard to engage in a world that doesn’t look very real or tangible and alongside those visual effects are some very disposable action sequences.

Given a 15 rating, there’s more gore and violence on display, but that doesn’t necessarily mean better set pieces. A great deal is thrown at the screen but because of the hollow story there’s no stakes infused into them. By the time you get to the next action scene, you’ll have likely forgotten the one that came before.

On top of that, most of the actors give off wooden performances and rarely look like they care. Harbour is the only saving grace in his portrayal of Hellboy. Very likeable and committed, he’s able to bring a good performance through the prosthetic make-up.

Working on the side of light but destined to be a catalyst for apocalyptic events, he does solid work showing those contradictions within his character. Another let down unfortunately is Jovovich’s revenge-seeking antagonist, who is as generic as they come.

‘Again, it’s hard not to compare, but I’m guessing many will wish del Toro would have done his third instalment.’

The pieces are there for a good movie, but Marshall fails in joining them together into a coherent story. Regrettably not even Harbour can rescue Hellboy. Combined with an over reliance on CGI and poorly executed action sequences, this is another reboot no one wanted or was asking for. I’m sure the studio will attempt it again in another ten years.

Based on the comic book by