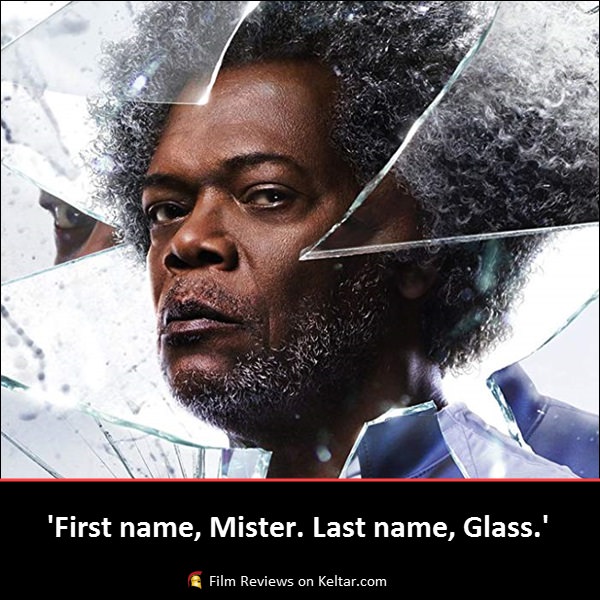 ‘David Dunn uses his supernatural abilities to track Kevin Wendell Crumb unware that a series of encounters will lead them both to Mr. Glass.’

His previous movie Split (2017) was considered by many to be a return to form for director M. Night Shyamalan. It was a twisted psychological thriller revolving around a man with Dissociative Identity Disorder, trying to unlock a superhuman personality hidden within himself.

Yet, being a Shyamalan movie, not everything was as it seemed. At the very last scene when Bruce Willis came into shot, it also revealed itself to be a secret sequel to 2000’s Unbreakable. Now, by bringing these two stories together we have his latest film Glass, which essentially goes about creating a whole new Shyamalan cinematic universe.

Set not long after the events of Split.

The plot follows David Dunn (Willis) and his pursuit for James McAvoy’s DID sufferer, and in particular the animalistic personality known as The Beast. When both are captured, a doctor Ellie Staple (Sarah Paulson) brings them to her institute. She then tries to convince them that their beliefs in their supernatural abilities are actually delusions which she would like to cure. Also with them is the brittle Elijah Price (Samuel L. Jackson), who seems to have his own nefarious agenda.

When Unbreakable came out, it showed itself to be an unconventional superhero movie. Taking place in a more grounded world, it explored comic book mythology in a serious way. It was also an origins story of David’s journey to becoming a superhero. Similarly, Split turned out to be the genesis of a super villain.

Glass should have brought these two powerful forces together in epic conflict. Right from the start however, those expecting a more conventional superhero movie will not find it here. Instead, Shyamalan continues to analyse and dissect our fascination with caped crusaders, and explores why fandom is so intense for these stories.

‘At every turn he subverts our expectations which many wanting a more traditional sequel will find infuriating.’

There’s no explosive action scenes or loads of special effects. Everything is downplayed and more thoughtful, with speech being the primary weapon and not fists. Even the climactic battle is intentionally low-key. To say this movie is meta would be an understatement. Jackson’s Elijah in particular is constantly spewing out monologues and observing how everything happening is something out of a superhero comic. To a certain extent, the story is also a social commentary on our obsession with superheroes.

Despite these subversions, if you can go along with Shyamalan’s approach, there’s still plenty to admire. For one thing, this is a well put-together movie with some distinct cinematography. Visually, everything about this film is intentional, and it’s deliberately filmed not to look like a typical superhero blockbuster.

Combined with an unnerving score, he brings over some of those horror elements from Split, making it a very atmospheric movie as well. Like some of his earlier films, Glass is slow paced, which again, won’t be for everyone. Clocking at just over two hours, there’s a lot of dialogue. Even the few action sequences that Shyamalan does put in, although exciting, aren’t big bombastic experiences.

It’s McAvoy who gets the most to do, shining as the deranged super-villain nicknamed “The Horde”. He’s able to give each personality distinct characteristics and mannerisms so you can tell them apart. Seamlessly turning from one character to the next, it’s a great showcase for the actor’s abilities. Surprisingly, he brings a lot of heart to some of the personalities, making parts of him almost sympathetic. Likewise, he also adds just the right amount of humour. Especially through Hedwig, the naive and permanent nine-year-old boy.

Willis on the other hand, has a more subdued role, but makes a suitable counterpoint to the more charismatic McAvoy. Looking like he cares for a change, it’s a subtle performance, and he has a sweet chemistry with his now grown-up son Spencer Treat Clark. Jackson’s Elijah is equally a welcome return, and proves a master manipulator. Him and Paulson’s Dr. Staple play important yin and yang roles. One is hell-bent on proving that comics are based on truth, while the other believes they are delusions of grandeur created by David and The Horde.

‘Glass will likely be a very divisive film. Many will probably hate its subversion and over-analytical approach to the superhero movie. But those who enjoyed his earlier works will find more of the same and appreciate that different direction he goes in. With a brilliant performance from McAvoy and a unique visual aesthetic, you can’t deny this is Shyamalan climbing back on top.’