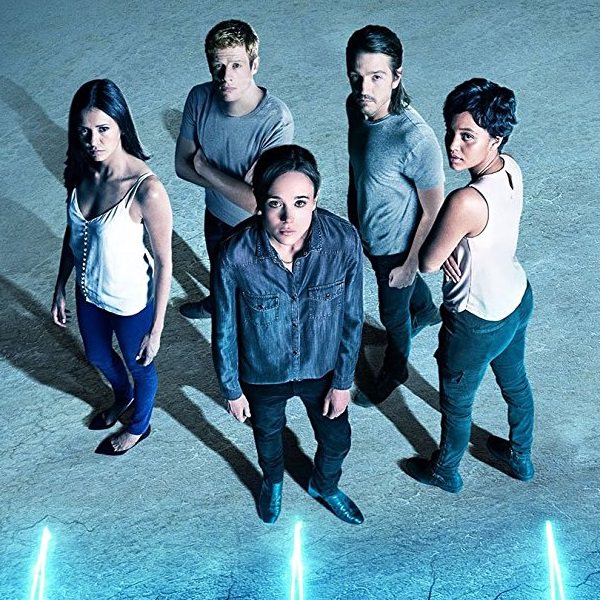 ‘Five medical students carry out a dangerous experiment that triggers a near-death experience in attempt to learn about the afterlife.’

Nearly thirty years later and where now revisiting Joel Schumacher’s flawed but cult Nineties movie Flatliners (1990). Although given the same title, this version isn’t just a remake as everyone thought, but actually a sort-of sequel, thanks only to Kiefer Sutherland’s small role and return as the same character from the previous film. Either way, it doesn’t bode well, and it’s just one more in a long line of sequels/remakes, proving once again that Hollywood is nothing more than a money machine. That they’ve run out of ideas and aren’t willing to take risks on original movies anymore.

Like the 1990 version, the story follows a group of medical students, each carrying their own baggage, who attempt to discover what lies behind the veil of death. Instigator Courtney (Ellen page) convinces her friends, including Sophia (Kiersey Clemons), Jamie (James Norton), Ray (Diego Luna) and Marlow (Nina Dobrev) to stop her heart for one minute and then bring her back. When the experience seems to change her for the better, everyone else wants a turn, but they soon realise that they brought something malevolent back with them, and it soon begins to torment them.

After watching this film, it’s clear this isn’t the remake or sequel to break the mould and be the rare good one. Really, there’s nothing particularly special about this movie as it practically follows the first one beat for beat, offering nothing fresh except different actors. Tonally, it’s also a bit of a mess, and director Niels Arden Oplev can’t seem to make his mind up what kind of film he’s making. At first it feels like a medical drama with some sci-fi mixed in.

Then it tries to be a supernatural horror film with a lot of conventional jump scares. In short, this uneven mixing of tones ends up making a jarring experience, where you can never really tell what kind of movie you’re watching. What also doesn’t help, is that we’ve already had TV show The OA (2016) and Netflix film The Discovery (2017) in the last year, which both dealt with a scientific approach to the afterlife and near death experiences. So already Flatliners feels a little late to the party.

The script also drags the movie down, with writer Ben Ripley looking like he knocked this out in a few hours. There’s no finesse or care taken in the storytelling, which also brings out one or two glaring plot holes. Furthermore he writes really thin character archetypes with no depth to them apart from the most basic of motivation. Whether it’s Norton’s trust fund kid looking to coast through his education, or Sophia feeling the pressure from her overbearing mother, none of them offer anything to engage with. Moreover, they all seem to unrealistically have major skeletons in their closets, just so they have something to torment them after they flat-line. This makes most of them unsympathetic and hard to care for.

Thankfully, there are a couple of redeeming aspects, making this not a completely terrible film. For example, despite the poorly written characters, most of the actors do a good job, and at least attempt to bring something to their performances. Page especially shows she’s better than this, and actually adds a lot of emotion to the guilt ridden Courtney. She clearly does her best, regardless of what the material affords her. Coming straight of Rogue One (2016), this is certainly a step down for Luna, but even he is unable rise above his inconsistent and typical voice-of-reason character. Likewise Sutherland, despite the wasted role, is a nice call-back for fans of the original.

The other element that is executed well, is the horror one. He may borrow a lot from other and better scary movies, but Oplev is able to create a few chilling and unnerving scenes that will definitely get you to jump and squirm in your seat. Other than that though, he does rely a lot on cheap tactics as well, like sudden loud noises to startle us, or a quick cut away to something that will get us to jolt.

‘Flatliners is another empty and lifeless remake, that doesn’t even improve on the original’s mixed film. With bad writing, a convoluted tone, and thinly drawn characters, this will be a movie that will join all the other pointless remakes and belated sequels that have come and gone over the years.’