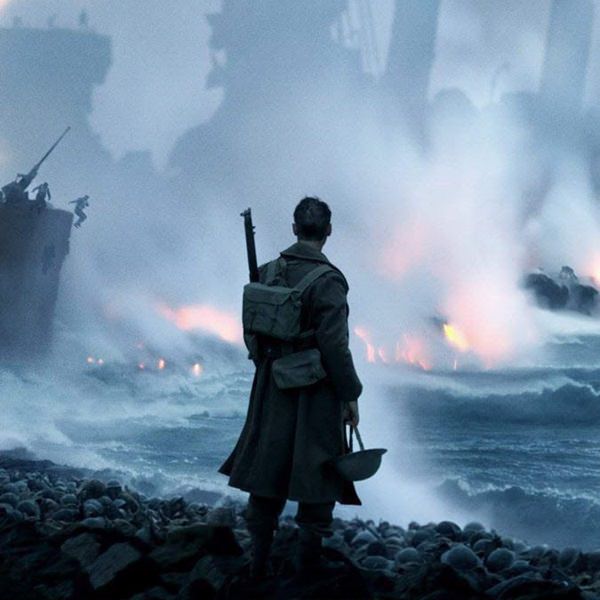 ‘Allied soldiers from Belgium, the British Empire, and France are slowly evacuated during a fierce battle in World War 2.’

Christopher Nolan has quickly become one of those film makers who can do no wrong, and with each passing film his ambition has only grown. Favouring the IMAX format and using old-school analogue film over digital, whenever one of his movies come out, it’s an event not to be missed on the big screen.

Whether it’s his fantastic Dark Knight trilogy (2005-2012), or his philosophical exploration into the human psyche with Inception (2010), he has always pushed the boundaries of what visual storytelling has to offer, creating a unique cinematic experience each time.

Dunkirk, his latest film, is no different, and by taking an important moment in human history and infusing it with his signature, non-linear narrative structure, is able to weave a breath-taking story.

Set in 1940, the story focuses on an event where about three hundred thousand British and French troops were pinned against the beach of Dunkirk. Their only hope is by protection from RAF forces, and being rescued by civilian boats across the channel. Witnessing from the three perspectives of land, sea, and air, we see this harrowing ordeal experienced through a variety of people, and how each situation effects them differently.

On the land, covering a week, the plot follows Tommy (Fionn Whitehead), Gibson (Aneurin Barnard) and Alex (Harry Styles), as they attempt to find safe passage across the channel back to England. Over the course of a day, Mr Dawson (Mark Rylance), his son Peter (Tom Glynn-Carney), and teenager George (Barry Keoghan) sail across the sea in their small fishing boat to help evacuate the soldiers. Finally, in the space of an hour, RAF pilots Farrier (Tom Hardy) and Collins (Jack Lowden) fly over to Dunkirk to provide support for the rescue.

All three plots are masterfully interwoven that you barely notice the different passages of time. Nolan skilfully goes back and forth among the three threads in such a way that it never feels jarring, and actually, he gets them to flow beautifully between one another. It’s certainly no small task but he pulls it off with aplomb, making this utterly peerless, and unlike any other war movie out there. Being more experimental than conventional, it’s another example of Nolan’s ambitious nature when it comes to film making, and a clear indication that he views film as a piece of art more than anything else.

He relies more on visual storytelling than characters talking to one another. Indeed, there’s hardly any exposition, with long stretches of time where no one speaks, especially in the opening twenty minutes where we first see Alex making his way to the beach. Despite the minimalist script, Nolan proficiently tells his story more with imagery than dialogue, causing everything to still remain coherent.

Like all his other bigger, special effects driven films, Nolan once again strives to keep everything in-camera, with minimal use of CGI. Paying off massively, there’s nothing quite like watching real planes flying around and being in the cockpit with the pilots, adding an authentic sense of danger for the characters, which offers something truly remarkable and visceral in these set pieces. The sounds of the aircrafts and explosions are deafening, dragging you right into the action and proving again this is a movie that needs to be seen on the big screen. Really the whole film is one long action sequence, playing out like a third act final but lasting the whole runtime. Never letting up, it’s another way of showing the unglamorous nature of war, with rarely a moment of safety.

All the action is edited impeccably to Han Zimmer’s score, which proves vital in building the suspense and keeping the three plots seamlessly flowing. Using a staccato rhythm built around the ticking of a pocket watch, there’s this constant rising tension that never really breaks until the very end, keeping us on the edge of our seats. Blending and synced with the sound effects perfectly, it all helps in making us feel like we’re right in the thick of it with the characters.

Speaking of which, Nolan doesn’t use traditional plot devices to get the audience to sympathise for his characters, particularly with the soldiers on the beach. We never learn of their background, or if they have loved one’s back at home. Plus, these aren’t your stereotypical Hollywood war heroes, full of charisma and gung-ho personalities. In fact, the only motivation they have, is that of survival. Nolan does a great job of getting us to care for them just in the present tense, and to have empathy for them in the current situation they find themselves in.

There’s a large cast but they all do a good job of presenting their characters, even with that minimal dialogue. Whitehead’s Tommy is who we start and finish with, and he excellently represents the morale and the mood of the soldiers trapped on the beach. Likewise, Styles, who’s mostly known as a pop singer, is surprisingly good as the more hardened Alex. In the air, and with pretty much just his eyes, Hardy conveys a lot as one of the more heroic fighter pilots. Rylance also brings a quiet dignity to Mr Dawson, as he eagerly sets of on his boat to play his part in the war effort. Even Kenneth Brannagh, with a small part, does a lot with little screen time, and really, no character is wasted.

‘This is another hit for Nolan, and shows once again that he is the king of creating breath-taking cinematic experiences, regardless of the genre. So far, in a year full of World War Two films, it certainly stands out as the best of 2017. Not only that, but with its original storytelling technique, fantastic score, and incredibly realistic and intense battle scenes, Dunkirk is shaping up to be one of the great war movies of our generation.’