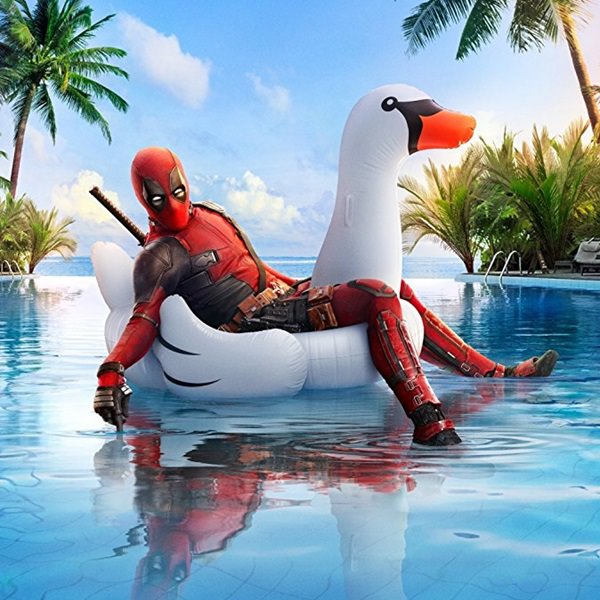 ‘Deadpool forms a team of mutant rogues to protect a young boy with supernatural abilities from Cable.’

After the huge success of the first Deadpool (2016), it was inevitable that we would get a sequel. Indeed Deadpool 2 arrives with new director David Leitch, and doubles down on what made the original so popular.

Promising all the madness and irreverent humour that made the character’s solo debut so much fun, there’s a lot this follow-up has to live up to. Fortunately, Ryan Reynolds returns with the same amount of zeal and passion he brought the first-time round, which is easily a big part of what makes this franchise work.

Not having to worry about an origin story, the movie gets straight into it. This time, it centres around Wade Wilson, aka Deadpool, and his mission to protect a mutant teenager named Russell (Julian Dennison). Targeted by Cable (Josh Brolin), a time traveling and cybernetic enhanced soldier from the future, this young mutant turns to Wade for help. Out gunned and outnumbered though, Deadpool must build a team if he hopes to succeed.

Really, the story’s a thinly veiled excuse for all the fourth-wall breaking comedy this character is known for. In fact, the self-referential and meta humour is relentless, and the moment the movie starts, it never stops poking fun at the superhero genre. This includes all the tropes that come with it, while simultaneously adhering to those narrative beats and elements at the same time. Full of in-jokes galore, it’s also a film that will probably be enjoyed more if you’re aware of all the movie news involving these various properties. Whether referencing DC, Marvel or the studio’s own X-Men, no one is safe from Deadpool’s brutal yet funny honesty

Even if you’re not tuned into that world, this is still an hilarious piece of entertainment. Certainly, the jokes come thick and fast, and they definitely hit more than they miss. Yes, there is an emotional through line that’s handled quite well, but the script combined with Leitch’s direction rarely take anything seriously. Saying that, it fits within the tone of the previous movie, meaning if you’re watching this, you were hardly looking for a dark and introspective experience to begin with.

If you want more than just laughs though, you needn’t fret, as Deadpool 2 is full of action and mayhem. Leitch proves the perfect choice to take over the reins. With a lengthy career as a stuntman and coordinator, he clearly knows how to film action and combat. Getting the most out of the various superpowers, it looks very cinematic and well shot. Similar to his work on the John Wick films and Atomic Blonde (2017), he keeps the edits to a minimum so it’s easy to follow what’s going on and take everything in. As a full-on comedy, he equally makes sure the action has some very funny moments, and one scene in particular after Deadpool has assembled his team, will have you rolling in the aisles.

Another thing that carries over from the first movie, is the gory and bloody violence. Pushing what they can get away with, this is a sequel that absolutely teeters on the edge of being too much. Having said that, there’s no other way of doing this character, and anything less than an R rating wouldn’t do him justice. Balancing the violence just right, Leitch again incorporates it well with the humour, especially in testing the limits of Deadpool’s powers, showing what he can survive in some very funny ways.

After the action and comedy, the film is aided by having great main characters, and a very game cast. Reynolds once again carries this film, and continues to be its biggest advocate. Throwing himself into this role, he gets all the best lines and has excellent comedic timing. What’s more, as a co-writer, he shows a keen understanding of how to use this character. For example, he gives him an arc that allows him to grow, while at the same time never undermining the silliness and stupidity of his personality.

Although the main star, this time, Reynolds is given a bigger ensemble of characters to bounce off. Dennison does really well as Russell, giving Deadpool the chance to show a more paternal side. However, newcomer Zazie Beetz as Domino is a clear standout, and almost steals the film right from under Reynolds. Holding her own alongside the more heightened Wilson, she brings a lot of pluck and wit to throw back at him.

Returning X-Man Colossus (Stefan Kapičić), likewise has a great combative relationship with Wilson, as he continues to try and prove Deadpool’s potential as a hero. When it comes to Cable, Brolin does good work as the time-travelling cyborg. He’s a character trope we’ve seen numerous times before, and is mostly there to service the plot more than anything else. Yet, he plays a superb straight man to Reynolds crazy antics, with his reactions providing some big laughs.

Deadpool 2 is a subversive and highly entertaining superhero movie. Not only is it action-packed with well utilised CGI, it’s a hilarious look at Hollywood’s favourite go-to genre as well. With brilliant characters, a solid script that keeps it small and personal, this is a sequel that builds on the original, while staying true to the overall tone. Offering something fresh and different, I’m sure it’s a way of doing comic book films other studios are kicking themselves for not thinking of first.