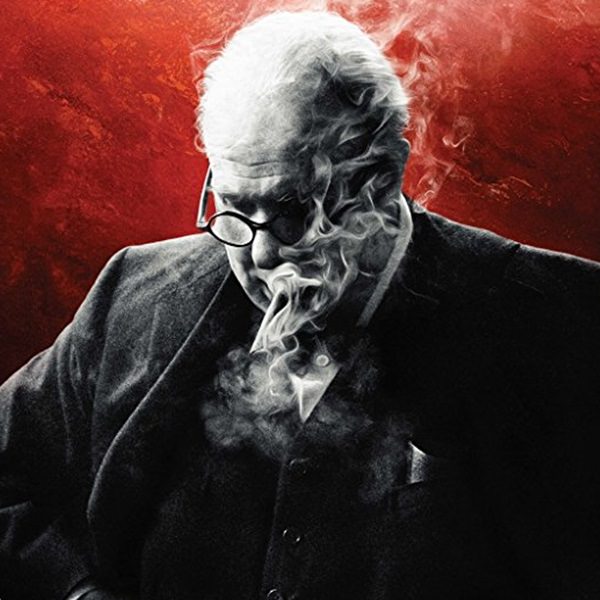 ‘Winston Churchill tries to rally the nation as Germany rolls through Europe and his colleagues want to advocate for peace talks with Hitler.’

Such a powerful and historic figure was Winston Churchill, that it’s unsurprising we’ve had countless portrayals of him in film and television. One of Britain’s most remembered Prime Ministers, in the last couple of years alone we’ve already had John Lithgow in Netflix original The Crown (2016-present) and Brian Cox in Churchill (2017). Now, director Joe Wright tries his hand in Darkest Hour, with Gary Oldman stepping into the shoes of this legendary and almost mythical man.

During May 1940, Prime Minister Neville Chamberlain (Ronald Pickup) is forced out of office in a vote of no confidence, and the controversial Churchill is asked to take over and form a new government by George VI (Ben Mendelsohn). With German forces pushing through Europe and pinning three hundred thousand British soldiers at Dunkirk, Churchill is under pressure to pursue peace talks with the enemy. Strongly feeling that is the wrong course of action, he’s only support seems to come from his wife Clementine (Kristin Scott Thomas) and newly appointed secretary Elizabeth (Lily James).

This is the third film within the last twelve months that in some capacity or other, has revolved around the Dunkirk evacuation. Christopher Nolan’s intense and time-bending Dunkirk (2017) was very much through the eyes of the people who experienced it first-hand. Their Finest (2017) was a fictional approach of the government wanting to use it as morale-boosting propaganda, and now, Darkest Hour as the lens of which to view Britain’s wartime leader and his political struggles.

Really though, this movie is pure Oscar bait, and more about getting Oldman an award than anything else. Indeed, it has all the hallmarks of a traditional Oscar film. A period setting, a historical figure, heightened acting, and last but not least, an inspirational speech. Even the timing of release seems deliberate, with it being so close to the academy awards.

As such a film, there’s also a familiar blueprint to its structure, and hits certain story beats that will be expected. Beats like our hero going up against the prevailing thought of his peers. Of him having to stand strong for his ideals and slowly turn everyone around to his way of thinking. All this works against it, with Wright struggling to bring anything original and fresh to the narrative.

Having said that, you can’t deny ‘Darkest Hour’ is a well-made movie, and regardless of the overdone story, is still an engaging look at an important time in world history. The detail to the period setting is excellently done, and it really feels like we’re looking at life in 1940’s London. Considering the dire times, there’s a undercurrent of comedy that serves the movie well, and keeps the tone from becoming too dour. It helps the characters feel more real and authentic, as using humour to distract ourselves from the horrors around us, feels very human and universal. This is thanks largely to Anthony McCarten’s script, who especially brings a dry wit to Churchill, and sardonic sense of humour.

Speaking of which, there’s no denying this is Oldman’s film, and he acts his socks off as the larger-than-life Churchill. He does a superb job of getting his portrayal to shine through the prosthetics, and never relying on them to do the heavy lifting. Not just through the face, but it’s a brilliant physical performance as well, with Oldman using all of his body to bring this real-life character to the screen. It would be so easy to over play it, and to a certain degree he does over act (working hard for that Oscar), but he also allows the more frail and human side to come through, and knows how to restrain himself when needed.

However, that focus on Oldman does mean a lot of the supporting cast rarely get a look in. James is good as the secretary who is designed to bring out Churchill’s softer side, and Thomas equally as the long suffering wife. They’re all good, but again, mostly there to serve Oldman, with their characters not feeling very fleshed out. The same goes for his political opponents in the form of Stephen Dillane’s Lord Halifax. Good chemistry is supplied with Mendelsohn’s King George VI, in which a slow friendship grows from an antagonistic relationship.

‘Despite the unoriginal formula, Darkest Hour is a really good movie that’s worth seeing for Oldman’s performance alone. With attention to detail, an inspirational story about one of our most influential leaders, and a look at an important part of human history, this is a film that teaches as much as it entertains.’

← Back to the Future review - pure unadulterated entertainment Three Billboards Outside Ebbing, Missouri review - a moving yet funny drama →