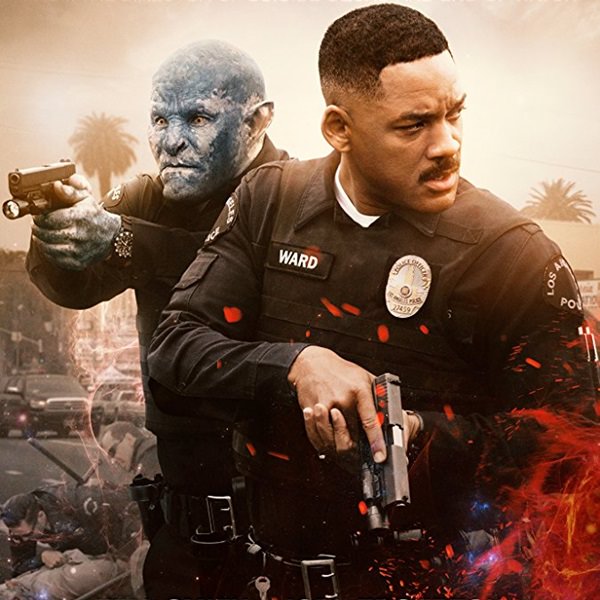 ‘A human cop and an Orc cop must work together to find a powerful wand before anyone else gets their hands on it.’

Bright is Netflix’s first foray into blockbuster film making, and is one of their most ambitious endeavours yet. Suicide Squad (2016) director David Ayer takes the helm, and with screenwriting duties going to Max Landis, there’s real potential here for a multiple movie franchise, proving this streaming giant is more than able to compete with the bigger studios. Additionally, it doesn’t hurt to have a big star like Will Smith in front of the camera, equally cementing this film as a contender to the usual way of big theatrical releases.

Taking place in an alternate reality where humans live side by side with mythical creatures, the story follows Smith’s prejudiced LAPD officer Daryl Ward, who’s forced to partner with the first ever orc cop, Nick Jakobu (Joel Edgerton).

While on patrol they come across a crime scene involving a magic wand, a rare and powerful weapon that can only be wielded by individuals called Brights. Along with lone elf survivor Tikka (Lucy Fry), they soon find themselves on the run from the authorities, gangsters, and a group of renegade elves led by Noomi Rapace’s Leilah, who want to use the wand for cataclysmic purposes.

This a bold concept, and you can’t fault the lofty intention of this movie. To blend two very opposing genres such as a gritty cop drama and a fantasy film, seems almost impossible. Yet, thanks to Landis’ solid world-building and Ayer’s competent directing, they somehow make it work, allowing you to buy into this foreign and alien landscape, while equally finding something familiar about it to latch on to. Combining these two different styles offers something original, and although some might find it jarring, if you did separate the two genres, they would be extremely clichéd and stale. It’s only by the joining we have something fresh to be experienced.

The world that’s been created is a fascinating one, and clearly a lot of detail has gone into bringing it to life. There’s a lot of mythology to introduce, and how this earth and its citizens operate is actually handled quite well, where there’s dense storytelling, and yet, still feels coherent. Yes, this requires a lot of exposition throughout the movie, where certain characters just pop up to dump necessary information, but for the most part, it feels organic and not as forced as it could be. The infrastructure of how these various species co-exist is wrapped in social commentary, that might feel a bit heavy-handed at times, but offers extra layers to this world. Essentially, the orcs are looked down upon and despised, with the elves being the one-percenters, and us humans being caught in the middle somewhere.

If that feels a bit too preachy for you, you needn’t worry, as Bright is also a highly action-packed movie as well. The world and mythology might be very detailed, but the actual story, when stripped down, is quite basic and easy to follow. Indeed, if all you’re looking for is some entertainment, there’s plenty of explosions, fighting and shoot-outs on display, as our main protagonists run through the city of Los Angeles, stumbling into one set piece after another. These aren’t terrible action sequences, but neither are they anything we haven’t seen before. However, the nature of this world being what it is, means we do get to see a mixture of urban gun fights, magical powers, nimble elf martial arts, and orcs with superhuman strength, all this helps boost that wow factor, offering something a bit different.

Considering the low budget when compared to your average blockbuster ($90 Million), the visual effects aren’t too bad either, and are better in places than some of the bigger theatrical releases we’ve had recently. What really stands out though, is the prosthetics work for bringing the orcs to life. Even though the rebooted Planet of the Apes franchise has shown us what we can achieve with motion capture technology, it suits Bright to have these creatures as physical and tangible as possible in this more grounded setting.

Regrettably, what brings the movie down are the characters, which are basic archetypes with at most, an extra shade of depth added here and there. We’ve seen these character tropes many times before, and they don’t really provide anything new. Rapace’s Leilah is especially guilty of being that stereotypical villain who’s in it for power and world domination. On the positive side, the two leads in Smith and Edgerton are good for what the script affords them. They have a good chemistry, where that cold and frosty relationship slowly turning to respect feels genuine and real, even despite the fact it’s a buddy cop blueprint as old as time itself.

Smith, as always, provides a charismatic presence, and in spite of him being a walking cliché, brings a solid performance regardless. Likewise, Edgerton is able to emote well through all that prosthetic make-up, and holds his own alongside his more recognisable co-star. Both are easily the best characters in this movie, with a close second being Fry’s Tikka, who ends up joining the two cops on the run through town. Unfortunately, outside of those three, the rest of the cast don’t get much to do other than fill conventional roles and spout plot points to keep the story rolling.

‘By and large, Bright is a fun movie, and a commendable effort for Netflix’s first attempt at a special effects driven blockbuster. Although lacking originality in the finer and ground-level narrative, it certainly makes up for it by having an interesting universe, with an in-depth mythology and alternative history to explore in possible follow-ups. With Smith’s star power and an action-packed plot, there’s plenty to enjoy in is this flawed but entertaining movie about cops, elves and orcs.’

← Star Wars: The Last Jedi review - Star Wars at its best Back to the Future review - pure unadulterated entertainment →