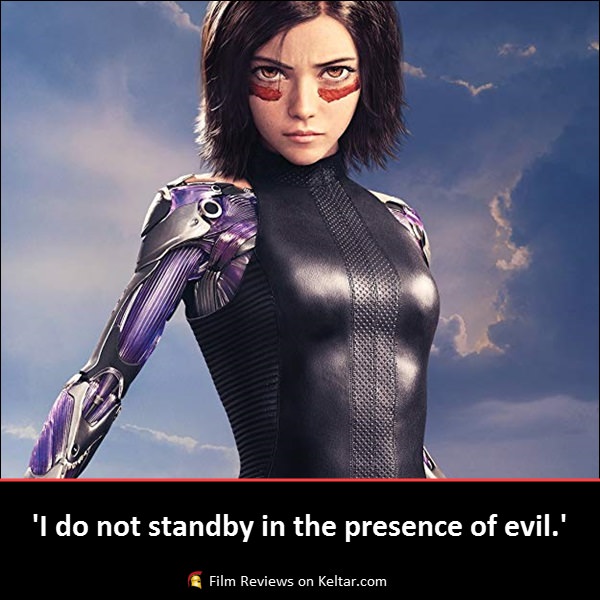 ‘Doctor Ido revives an abandoned cyborg. Unable to recall her past, Alita sets out on a dangerous quest to find out who and what she is.’

Based on the popular manga series, Alita: Battle Angel has been in development hell for over fifteen years. Starting out as a passion project of James Cameron’s, he finally passed it over to Robert Rodriguez to direct when he got caught up in everything Avatar (2009). Even with this upheaval, as co-writer and producer, you can still see his fingerprints all over this movie.

Set in the distant future and three hundred years after a war known as the fall, the story follows a mysterious cyborg (Rosa Salazar). Found in a junkyard by the kindly Doctor Ido (Christopher Waltz), she is restored and given the name Alita. With no memory of her previous life, she quickly works out the rules of this new world she finds herself in. It’s not long before she discovers she has deadly abilities which are tied to her mysterious past. Making a name for herself, Alita soon gains the unwanted attention of Vector (Mahershala Ali). A criminal who runs and rigs a deadly sport known as Motorball.

Considering Alita: Battle Angel is adapted from an already existing manga property. It’s unsurprising to find there’s a lot of story to unpack.

There’s just too much in terms of plot and world that Rodriguez struggles to fit within a two-hour movie. He puts in a noble effort, and there is plenty to enjoy. But unless you’re familiar with the source material, I can imagine a lot of viewers coming away from this film unsatisfied. Plot threads are left dangling, characters are alluded to, and backstories are never explained. It’s as if we’re watching a prologue to another movie, which I’m sure is the plan depending on the box office.

If that is the case, a film should be able to tell one complete story and not be all about the setup and exposition. Obviously there’s a dense mythology to unravel, but it’s clearly table setting for something bigger. Yet regardless of its intention of being a first chapter of many, it needs to stand on its own. Unfortunately, Rodriguez finds that difficult to achieve with Cameron’s script.

‘Despite these finer story issues, this is not a bad movie.’

Rodriguez and Cameron are great film-makers, with there still being plenty of elements to recommend this film. Although the more in-depth narrative leaves much to be desired, the broader strokes of this world present an intriguing cyberpunk landscape to explore. Cameron in particular has always been obsessed in pushing movie-making technology.

It comes as no surprise, to find this is an elegant and visually detailed world. So well thought-out, that it almost makes up for the messy story. When it comes to a city full of cyber-enhanced humans, that aspect is also fully and seamlessly realised. For the most part, the visual effects just blend in to the background.

This is foremost an action movie, and those special effects are utilised skilfully for the numerous set pieces littered throughout the film. As a martial artist, Alita herself offers some brilliantly choreographed ground-level battles. Her moves are smooth and operatic, bringing elegance to this killing machine.

The way these sequences are edited are likewise fluid, allowing audiences to take in all the robot carnage in its glory. What’s more, as technically robots, Rodriguez goes all out in the destruction and dismemberment, not having to sacrifice that more friendly 12A rating. Thankfully, all the CGI on display doesn’t result in a huge mess, except maybe the Motorball scenes.

Regardless of the incomplete arcs, the characterisation for the lead actors are decently developed.

Salazar brings a real child-like innocence to Alita, as she slowly navigates this unfamiliar city. Going from a seemingly weak and naive girl to untouchable warrior feels authentic, helping audiences relate and cheer for her. The motion-capture technology used to bring her to life is truly outstanding.

Even with those enlarged eyes and mechanical body, your buy into her as a physical presence amongst the non-cyber characters. On top of that, she has an endearing chemistry with Waltz’s father figure, who helps her discover who she really is.

Sadly, outside of those two not everyone else gets that much to do. Keean Johnson plays a stereotypical love interest, who’s mostly there to explain everything and aid Alita on her journey. Ali is wasted as a conventional antagonist with no real depth added to him. And Jennifer Connelly has absolutely no bearing on the story whatsoever.

‘Alita: Battle Angel is an entertaining and visually exciting sci-fi movie. Combined with excellently shot and character focused action sequences, there should be enough there for most audiences. Unfortunately, it’s let down by a convoluted and incomplete story, requiring research if you want to fill in the many gaps the plot has. Instead of worrying about setting up a whole franchise, Cameron and Rodriguez would have been better off by just concentrating on telling one cohesive story with a beginning, middle and end.’

Based on the graphic novel series by