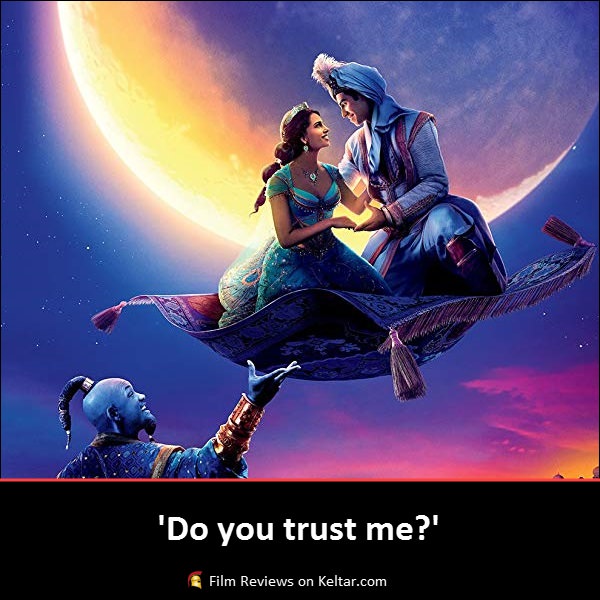 ‘A homeless street urchin and a power-hungry Grand Vizier compete for a magic lamp containing a Genie that can grant the owner three wishes.’

Less than two months before Dumbo (2019) and we already have another Disney live-action remake hitting theatres. Aladdin is based on the popular 1992 animated film, which has the advantage of being part of the studio’s renaissance period and fresher in people’s minds. More importantly, it is most memorable for the late Robin Williams brilliant and mostly improvised voiceover work as the Genie. This new version is directed and co-written by Guy Ritchie, who has the difficult task of honouring the original while also doing something different with this well-known tale.

Set in the city of Agrabah, the story follows a down-on-his-luck Aladdin (Menna Massound). Living rough on the streets with his pet monkey Abu (Frank Welker), he longs for more. Through the nefarious scheming of Jafar (Marwan Kenzari), a palace official, Aladdin comes into contact with a magic lamp. Containing a wisecracking Genie (Will Smith) who grants three wishes, Aladdin sees a chance to change his fortunes. Turning himself into a prince, he has the chance to woo the princess Jasmine (Naomi Scott), who is also struggling with her own issues.

Like the Beauty and the Beast (2017) remake, Aladdin is very similar to its animated counterpart. There are attempts to update the story and modernise the themes. But anyone who grew up with that first film won’t find anything new here. Scenes and dialogue are practically lifted from the original and placed in this new version. Apart from one new original song and the classics being jazzed up, it’s hard to justify its existence except the money it will bring in.

‘Yet despite that one issue, you can’t fault this movie which is still a lot of fun.’

You could even argue that it’s an old story for a new generation, and the few changes that are made to the narrative feel merited. Jasmine, for example, has a different arc and incentive added to her character. The original had her portrayed as a spoilt and privileged monarch who took for granted everything she had.

What’s more, she only served as a love interest to Aladdin, with her just wanting to marry out of love and not royal duty. In Ritchie’s version she’s altruistic and cares for the people of Agrabah. Her desire is for more than just to marry but to actually lead herself. This gives the film an element of female empowerment which is sorely lacking in those earlier Disney classics.

‘On top of that positive message, Aladdin is still an entertaining romp from start to finish.’

Easily appeasing young viewers, there’s plenty of colour and action popping out of the screen, making this a real visual treat. Not only that, there’s a commitment to using physical sets, which gives off the aesthetic of those old-school musicals. Akin to his previous movies, Ritchie also keeps everything moving at a fast pace, and the action scenes are well shot.

When it comes to the special effects, they’re certainly not the worst in the world. They blend in well with the physical sets and the actors all do a good job interacting with them all. Where they get slightly questionable is in the Genie’s blue appearance. If anything it’s this otherworldly yet humanoid entity that struggles to fit in the most. Having said that, the eyes adjust quickly and you soon accept what you’re seeing. Besides, he’s not in that form through the totality of the runtime.

‘Outside of that dodgy mo-cap (motion caption suit), Smith is on solid form as the Genie.’

Arguably having the toughest job of having to follow in Williams’ footsteps, he clearly takes the challenge full-on. By no means surpassing his predecessor, Smith as always exudes charisma. He is simultaneously able to both honour Williams and put his own spin on the character. Displaying a great chemistry with Massound’s Aladdin. You really feel there’s a genuine friendship between these two very different people. Speaking of Massound, he plays the titular character nicely, adding a dorky charm which makes him more likeable. Likewise, he sings his songs with great vigour and gets an impressive dance number to boot.

Scott is just as brilliant in that more fleshed-out role as Jasmine. Getting to show a range of emotions, she makes the most of this bigger and meatier role. Combined with an excellent singing voice and her own original song, she’s a Disney princess who makes for a positive role model. It doesn’t stop at Jasmine either, as Kenzari’s Jafar is also written with some extra depth than your average Disney villain. Given a believable backstory and motivation, you can clearly understand his decisions.

‘Aladdin might be a pointless remake to those who have a nostalgic attachment to the original.’

Many might take issue with Smith’s Genie and argue its inferiority. Ritchie however, has done a respectable job in adapting this familiar tale for a new audience. What it lacks in originality, it makes up in pure energy, spectacle, and by including a more progressive heroine. Bring on The Lion King (2019).